Before I read the headline, I thought, “That looks like an Egon Schiele sketch.” It looks like my art course wasn’t entirely wasted; now I just have to start visiting charity shops.

Don’t forget Goldbären, as payment for that underage girl of whom he made that sketch.

On a more serious note, I suspect someone mistook the underside of the subject’s rib cage for saggy breasts, took a pencil and added an extras pair of nipples.

Schiele-inspired, yes, but I seriously doubt it’s actually by him.

Also dislike Michelangelo and all the rest of the renaissance painters and the “porn”-ridden baroque then. The expressionists and impressionists were not much better. And antique sculptors - all of them white men, anyway. Let’s face it. We need to burn all arts, smash all sculptures in the name of decency! Let’s go, fellow Taliban. God wants it.

I bought two pieces by Yaacov Agam at a thrift store for $100 each once. I did very well in the resale! It does happen. (Not as well as the buyer in this story though!!)

I can only judge art by the response it inspires in me. Yeah, something oppressive about the Schiele nudes, for me. Just like the weekend I spent watching Wagner’s entire Ring cycle on public TV left me feeling very creeped out. The state of mind these works leave me in is not one I want to visit often.

BFD -I got a Peers at an estate sale! 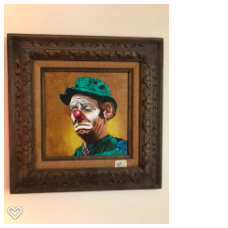 Tangentially related: I found a massive, hypnotic oil painting at a thrift store and despite all the searching cannot find anything about the artist. I still love seeing it on my wall. Thrift store art ftw.

“To her satisfaction, it was authentic. “It was a girl who modelled for Schiele frequently, both alone and sometimes with her mother, in 1918,” Kallir said. Researching further, she could place the work within a sequence of 22 other Schiele drawings that exist of the girl, even pinpointing two that were probably executed in the same modelling session. Many of those drawings were studies for Schiele’s final lithograph, Girl .”

On a more serious note, I suspect someone mistook the underside of the subject’s rib cage for saggy breasts, took a pencil and added an extras pair of nipples.

Yeah, the extra pair really is a head-scratcher…Was a previous owner disappointed in the size of the original pair? Were they trying to make it more pr0ny to bring up the sale price? And the original nipples are a little suspicious, anyway - Schiele was notorious for a lot of things, but subtlety wasn’t one of them. Just how pre-pubescent was this model?

Art Historians keep talking about how he depicts his models as emaciated, but IMO, I don’t think that was really a decision by Schiele. Poor people - the kind of people who would allow artists to sketch them in the nude - were emaciated. This was before antibiotics, so tuberculosis was rampant and no one checked if unscrupulous grocers and millers added arsenic to flour (and other food) to keep weevils out. Malnutrition also stunts childrens’ growth and delays puberty. So when we talk about the age of consent in historical context, an underage child appeared much more childlike than well-fed children from our era.

Yep - his stuff gives me the heebie-jeebies - whether the model is a scrawny girl or himself.

Rodin did some big bronzes that were just spread female legs. Artists that prejudge their work by content are unable to make art.
Robert Mapplethorpe is a photographer that many find repellent, beyond his beautiful flower pictures, because of his work’s gay themes.
Ansel Adams is not the prevailing example in the art world.

So how much exactly of this supposedly 100-200k is going to habitat to humanity? You guys shouldn’t run articles like this. Very disappointed.

Your first question is legitimate—I wondered the same. But how does that extend to Boing Boing not reporting on such a find? Historically, the bloggers here have reported on many similar discoveries.

Just because you have a qualm does not mean the site should not report on this.

Further, BB is telling me to welcome you to the comments board. Welcome! (Now get real.)