To do in LA this weekend: Scottworks, celebrating visionary composer, inventor and musician Raymond Scott

Bummer, I don’t see any kids events listed on the schedule. Seems like a missed opportunity seeing as how so many of us came to appreciate him from the re-release his Soothing Sounds for Baby series. I’d love to see my 1 year old niece experiencing his sounds with a bunch of other chill babies.

So that’s where Carl Stalling got it! Partway into Scott’s Powerhouse I was like, “That’s Looney Tunes music!”

Then I found this:

It’s a montage of clips from many (most? all?) of the Looney Tunes cartoons that use Powerhouse in their soundtracks. 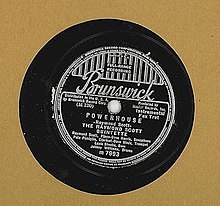 "Powerhouse" (1937) is an instrumental musical composition by Raymond Scott, perhaps best known today as the iconic "assembly line" music in animated cartoons released by Warner Bros. In scripted comments read on the First Anniversary Special of CBS Radio's Saturday Night Swing Club, on which the Raymond Scott Quintette performed, host Paul Douglas announced that "Powerhouse" had been premiered on that program in January or early February 1937. Scott's Quintette (actually a sextet) first record...

So that’s where Carl Stalling got it! Partway into Scott’s Powerhouse I was like, “That’s Looney Tunes music!

Not just that but Carl Stalling rearranged other Raymond Scott Quintette pieces for Looney Tunes.

As @serfer0 above says kids music is an important element of Scott seeing as he is part of all of our musical DNA through the use of his music in cartoons. It’s almost like Powerhouse is the default music for factory scenes in cartoons.

Ever since I read in a book about Warner Bros. cartoons that Raymond Scott being the source for the most iconic Looney Tunes music, (19this was pre-WWW days) I’d been obsessed with finding his music, which at the time (mid 80s) was difficult to impossible if you weren’t into collecting 78s because as far as I can tell now, that music was not released by any original labels on LPs.

Somewhere (I think the record store in Mill Valley, CA) I found a bootleg record of one of his radio shows. It still didn’t have Powerhouse, a holy grail at the time. There are several of those records you can find on ebay btw and digitally as well. They’re cool old timey radio.

Then the glorious golden era days of 90s CD re-issues and compilations came and we finally got an official release and it did not disappoint. It was amazing.

Then followed discovering his later material and pioneering electronic music.

I’d been hard press to call Soothing Sounds for Babies children’s music though.

Anyway, thanks for the info!