What do you think, @TobinL?

Wrong Spirits. Heading back to the lounge.

Can we send this back in time to my teenaged self who, even though he knew Ghostbusters was fiction still searched in vain for Tobin’s Spirit Guide?

When I learned Dan Aykroyd was influenced by his own family’s history with ghosts and spiritualism I assumed it was a real book. This would have saved me a lot of condescending snickers from librarians.

I go with what @wisconsinplatt said… wrong kind of spirits. 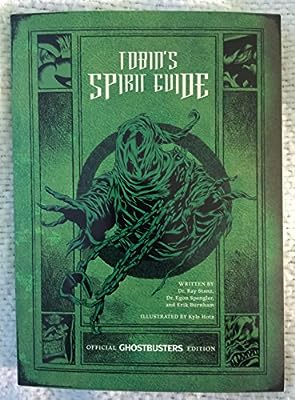 Ghostbusters by West End Games, the only RPG I could play with my Grandparents.

I called the phone number more times than I rightfully should have.

Did somebody not understand that was supposed to be an old book that they were using as a reference and not a book they wrote?

Isn’t this a bit like releasing a Necronomicon by Dexter Ward?

I was hoping for Amon Tobin. But then, I usually am.

Right! Or at least could have made it “updated additions by Stanz and Spengler”

Are there entries from The Real Ghostbusters cartoon? Like Samhain or the Boogeyman?

Yeah. I thought this was super cool but that kind of spoils it.

According to a review I read: films, toon, comics and video game all got sourced.

Last I read (which was several months ago), he was working on a new album. Can’t wait. ISAM (the album and the tour) was incredible, even by his standards.

Yeah, and there’s a picture of the Stay-Puft Marshmallow Man in the upper left of the cover. Someone really didn’t understand how “in-universe artifacts” work.

He had the Dark Jovian EP last year, which was nice by normal standards but nowhere near the brilliance of ISAM. I think he’s got it in him to get up there again though.

I’m ready to believe you!

For a minute I thought it was some sort of joke on the lost spirit of the Tobin Tax.