There is a bit of irony there, huh?

And all those other guys, when they realized the scope of what they’d done, sincerely apologized, recanted, and resigned in disgrace. Didn’t they? At least that’s how I remember it.

To the spoiled go the victories 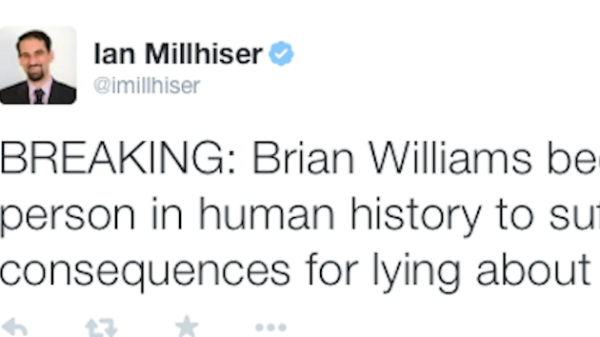 One perfect tweet has everything you need to know about Brian Williams'...

I believe that crew sold out of the Shorter version.

Title: “I still have both my legs, suckers!”

Oh, so positive professional consequences are to be suffered too?

Give it a few years and Brian Williams will remember embellishing his story deliberately just to make this point.

Obviously this was mis-remembered as well. Otherwise George Bush would have pronounced it “Nuke-u-lar”

I’m one of those pronunciation assholes.

When someone says “newcyoolur”, I always stop the conversation and ask them “What is a newcyoolus”?

I could have used the shower one…

Dammit; I came here to say that… LOL