TOM THE DANCING BUG, in which Winnie the U.K. gets into a tight place

[Drums fingers, waits for someone to argue with that.]

My brother’s been riffing on this over the week:

“How did you vote?” said Pooh
“Leave,” said Piglet
“Why was that?” said Pooh
“Well I’m just fed up of being pushed around by faceless European bureaucrats and I’m fed up of my country being taken over by foreigners. I go into parts of the hundred acre wood and I don’t see a British face anywhere. I want my wood back,” said Piglet
“I’m really surprised you feel that way,” said Pooh
“Well it’s not all foreigners, but last week Eeyore was pushed into a river by a ‘Tigger’ and I just thought, ‘how has this happened? I was going to report it to Owl but, political correctness now, I was afraid they would report me for racism and say that it was the Tigger’s right to push people into rivers because that was part of his culture,” said Piglet
“I’m not sure that’s true; and Tigger’s not even from the EU. He’s Indian. His being here has nothing to do with free movement within the EU,” said Pooh
“Well we’ve got to get some control anyway, people are coming over here and they’re taking our benefits and our jobs and sending money back to their countries. It’s out of control. Anyway, how did you vote?” said Piglet
“Oh I couldn’t vote, I’m from Sweden,” said Pooh
“But your English is so good,” said Piglet
“Well yeah I’ve been studying it since primary school,” said Pooh
“I really thought you were English,” said Piglet
“How many bears do you know that were born in the UK?”
“I guess that makes sense"
“Are we still friends?"
“Not fucking really Piglet"

Sadly very true except for the teeny bit racist. Farage has spent the last 17 years encouraging racism, and it has borne fruit.

A gentlemen’s club in Hell.
Mitterand: Mon Dieu! Les Anglais se sont suicidés!
(we now follow the subtitles)
De Gaulle: What is up, Mitterand?
Mitterand: The English have voted to leave the European Community!
De Gaulle: Don’t make jokes, Mitterand.
Mitterand: It is true, our special agent has succeeded.
De Gaulle: What special agent?
Pompidou: It is true, my General. For seventeen years we have had a secret agent in place, M. Farage. He has succeeded in separating Britain from the EU.
De Gaulle: You mean…the defeat of 1975 is avenged?
Pompidou: Yes. Without a shot being fired, he has wrecked perfidious Albion.
Mitterand: What about our friends the Scots?
Pompidou: They hope to make other arrangements.
De Gaulle: This calls for champagne. Someone invite Lucifer. And Churchill.
Mitterand: Churchill?
De Gaulle: Of course he must be present to witness the downfall of England and my revenge for his insults during the Second World War.
Pompidou: But are we to waste champagne on Churchill?
De Gaulle: Good point. Garcon! A jeroboam of the Crystal Lucifer likes so much. And half a pint of warm beer, flat as ink.

(All politicians go to Hell. They find it congenial, temperate and easygoing after national politics.)*

[Edit - A A Milne though famous for the children’s books was something of a polymath and a successful playwright. He is also responsible for this comment, which may endear him to some readers:
“The Old Testament is responsible for more atheism, agnosticism, disbelief—call it what you will—than any book ever written; it has emptied more churches than all the counter-attractions of cinema, motor bicycle and golf course.”]
[edit edit - and of course they can always find a good* lawyer and tax accountant when they need one.]
** Well, not good in that sense, obviously, or they’d be in the other place. Good in the sense of being a slimy weaselling master of procedure with the goods on a number of judges and a bottomless appetite for money.

So this Boris for PM facebook group is massively racist. Who would have thought it? facebook.com/BorisForPrimeM… https://t.co/ff1qP7aDbl 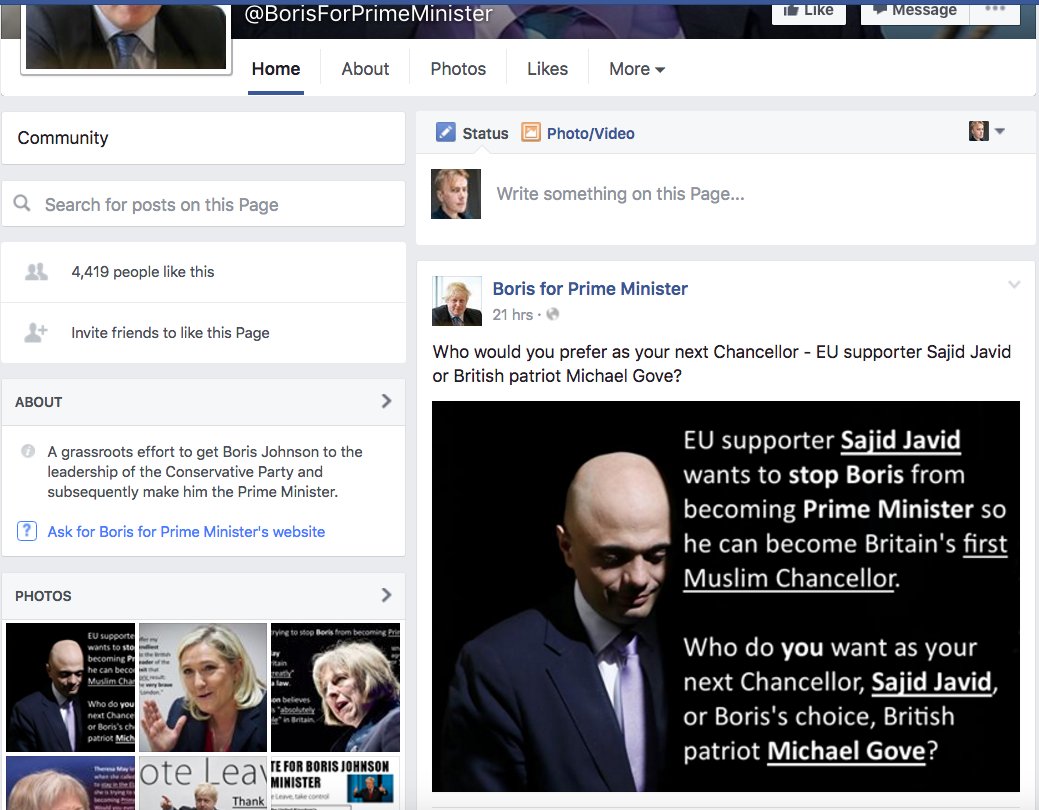 As usual for UK voters many people cast their ballot with little basis in reality. I guarantee that at least 25% of the outers thought their vote would stop immigration from the EU which is clearly not the case as free movement will still stand.

I work with a colleague who seems to have voted, “leave” because they don’t like the metric system. Either that, or they are incapable of articulating their actual dissatisfaction. I voted “stay”, because fuck the Tories.

If Johnson and his merry band are forced to choose between keeping access to the single market and getting rid of free movement, which way will Murdoch tell them to jump? Johnson’s tied himself to the UKIP crazy train now, he’s got to keep them happy or his vote will dissolve.

I’d be fairly happy with staying in the EEA and doing a Norway, but only because that’s as close as we could get to where we are now. We’d keep paying, keep free movement (which is a very good thing) and just lose our seat at the table to write the rules. But that’s not what the Leavers voted for.

I work with a colleague who seems to have voted, “leave” because the don’t like the metric system.

Excuse me? I’m an American, and I heard someone wanted to argue?

I think you need the next thread over, it is about Gun Control.

Winnie the Pooh in a bowler is something that really needs to exist in plush form.

This isn’t Arguement, this is Abuse. You want 12B, down the hall.

No, I really don’t. Please don’t make me go over to gun control. I’ll be good, I promise.

Poles are usually light skinned though.

No, I really don’t. Please don’t make me go over to gun control. I’ll be good, I promise.

And this is why I come here. Thank you.

I guarantee that at least 25% of the outers thought their vote would stop immigration from the EU which is clearly not the case as free movement will still stand.

It seems like it was the major issue. And now the “leave” campaigners are very disingenuously pretending it was never about immigration now that it’s clear nothing will change in that regard.

This isn’t Arguement, this is Abuse. You want 12B, down the hall.

I think he misused “innit,” but otherwise a great comic.