Top 15 bedbug-infested cities in the U.S

And just in case, put EVERYTHING through the clothes dryer immediately when you get home…

What the FUCK is going on in Ohio?

Should we fence it off and do like a controlled burn of the place?

We wash everything and leave the cases on the garage floor for a few days, then up on a shelf.

Is washing not recommended?

I too am surprised at OH, what’s up Florida Man? off your game or something

Just great. I never travel anywhere, but I’ll still be itching all afternoon.

put EVERYTHING through the clothes dryer immediately when you get home…

OK, check. If I ever go to these places, or other ‘over the big ocean’. That’s my excuse to buy such a thing

What the FUCK is going on in Ohio?

Maybe they are better at noticing them and calling the exterminators?

My daughter went to a camp (one with cabins) where all of the kids’ luggage was treated in a hot room upon arrival. Of course if the system failed they did not heat on departure to stop potential export. Fortunately there were no bonus guests on return.

Should we fence it off and do like a controlled burn of the place? 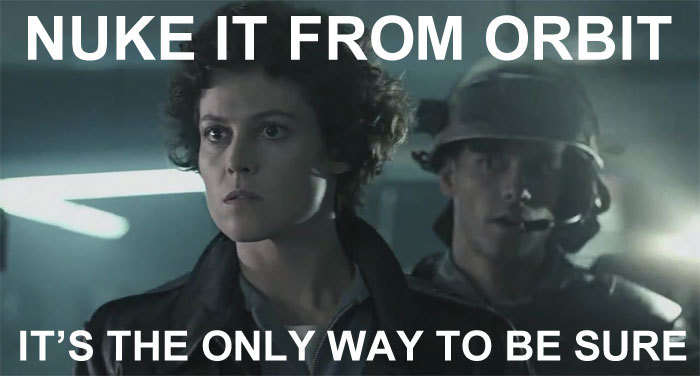 …on a second thought, recutting/redubbing “Aliens” to appear to be a movie about exterminators vs bedbugs could be fun.

Well, I guess if Detroit has to be #1 on a list I’d prefer Bedbugs over Murder Capital, its old favorite. I guess. Also there is no place called “Philadelphia, MI” as far as I know, pretty sure they meant PA.

There was a joke here, about a visiting Russian. (These were stereotyped as “ours are bigger/better” - imagine a stereotypical Texan, as in this sense Texas is the Russia of the US.)

It hasn’t been murder capital in quite few years. We’re number 7!

No need for hysterics? I live in Ohio for chrissakes!

On the internet, no one knows you’re a hive of bed bugs in human form.

From TFA, bold my added emphasis, “The list of top cities for bed bugs was created by compiling inbound lead data from the more than 300 Terminix branches across the country. The rankings represent Metropolitan Statistical Areas (MSAs) with the highest volume of calls from Jan. 1, 2015 to Dec. 17, 2015.”

So it’s not normalized in any way–not by resident population, tourist flux, hotel number, number of Terminix branches, Terminix advertizing rates or anything else. So, pretty much worthless statistically. That said, I’m ok with nuking Ohio.

Never mind how to cope with it. What I would like to know is why bed bugs are such a serious problem in parts of the US. I don’t think I have ever encountered any but then I have never stayed in any of the named cities.

The bedbugs are so numerous in Philadelphia they managed to collectivly lift the city and move it to Michigan.

Well, if you count SF-Oaktown-SJ as three separate cities, which they are, then CA has 3

Texas is the Russia of the US

And Russia is the Texas of the rest of the world. Christ, what assholes.