Tourist booed, pelted with pebbles and doused with water for climbing Mayan pyramid

hoping against hope that this wasn’t an american “influencer”.

Decades ago everyone climbed them. Me too. Glad it’s stopped - I was a dumb kid then.

Seen here are other people that tried once: 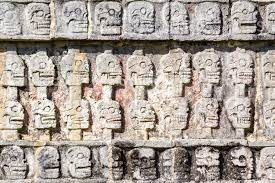 Yeah, I climbed Chichen Itza as an adult in 2002. I’m not surprised they no longer allow that.

What does surprise me is that you can apparently still climb Nohoch Mul at Coba. I did back in 2002, but people would occasionally slip, fall and die.

I’m not surprised they no longer allow that.

There was a knee high rope fence around it when I was there last. Not much of a deterrent but it seemed to keep the hordes off. People were generally pretty respectful.

I believe you can still climb to the top if you’re prepared to take part in a short ceremony alongside a guy with an artisanal obsidian knife - guaranteed social media stardom.

My wife and I went to Chichen Itza while on our honeymoon in the '80s. Beautiful place. We climbed the temple. There was even a rusty heavy chain running down the central staircase that was, I suppose, there for people to hang onto as they descended. I’m glad that’s gone and that they got rid of the rust stains on the steps. I suspect they stopped letting people climb it more as a safety issue than out of respect for the monument or culture. If you slipped or stumbled, it was a brutal descent.

I might expect something like this happens with some frequency? The alternative is that the vast majority is smart enough to figure out that they shouldn’t be doing that, and I’m not sure I have enough faith in humanity to believe that. Or maybe there were recent cutbacks in security?

There’s a sign with a very long list of things you’re not allowed to do at Machu Picchu and I understand they’re aggressive about enforcing it.

Considering the original purpose was human sacrifice, rather than more benign practices, it’s more than likely that is was safety issues that led to stopping tourists climbing up. Having said that, increasing numbers of tourists climbing up and down would inevitably cause increasing amounts of wear and damage to the fabric of the building so probably a mixture of both.
Similar reasons for stopping tourists from climbing Uluru in Australia - because of the heat, quite a few people suffered severe heatstroke and getting them down was problematic, but Uluru is also an important sacred site to indigenous peoples so quite rightly tourists were banned from climbing up it.

I went to Belize in 1998 or so and climbed things at both Caracol and Xunantunich (as far as I know consistent with the then-current instructions) but – disrespect aside, thank you never again. Those things are freaking steep.

i hope this whole “booing influencers and pelting them with water and water bottles” thing catches on everywhere.

Considering the original purpose was human sacrifice, rather than more benign practices

Thanksgiving turkeys play a role in how certain tables have been designed and sold.

Q. Why, exactly, do you need to pay more for a larger, more impressive table?
A. Entertaining?

When I visited Chichen Itza in 1998 many people were climbing it. I remember thinking that some of the senior citizens were in grave danger, but at the time it was SOP. I’m not surprised they stopped allowing it.

I seem to recall an internal staircase that we were allowed to go up as well (under close supervision), that led to a room deep inside with a jade jaguar. Very narrow, steep and slippery, I remember thinking that if someone at the top slips it would be a brutal pile of bodies at the bottom. Now I think my incipient claustrophobia would put a hard nope on that inside staircase.

Uluru was open to climb when I went back in 2004 (?). They were just beginning to use the original names IIRC so there was a lot of Ayers Rock/ Uluru depending on where you were getting your tourist info.

Bottom line: She got all the clicks she wanted.

And continues to do so. Not much of a deterrent.

Have you TRIED cutting out a sacrifice’s heart on a coffee table?! It makes the entire ceremony seem ridiculous!

I wonder if they ever made a sacrificial altar with one of those leaf extensions for special occasions.