Me too.
I never met the guy who, by all accounts, was the biggest of assholes as a young man, so the recorded work doesn’t have the taint of taint like it does for so many others.
I love it more than most things.

Lust for life? More like better lust for a sammich, amiright?

Oh, thats… thats mean. Where do you live, I’ll take them.

I’ll drop them off. You don’t need to know how to return them where I live.

I smell some awesomeness.

Hmm only if you make it very clear, my Boba Fett toys are for looking, not for playing with.

That dancing! It’s as if he were trying to hypnotize chickens!

I saw it at the Sydney film festival. There’s no live footage that isn’t already on youtube, and Iggy has told his story plenty of times before. It was nice to see the Ashton’s get to say their piece. But on the whole it kinda detracted from the mystique of those albums.
A friend I went with, who was not familiar with the Stooges, made the point that music documentaries should showcase some of the music, because there wasn’t much in this.

I guess it’s hard making a doco when no footage exists. Someone tried to do one on Steve Hunter and Dick Wagner which had the same problem.

I remember in college I was listening to “Metallic K.O.” (which is admittedly pretty harsh in places) and this deadhead friend scrunched up her nose and said “you don’t actually like this, do you?”

Maybe if she could’ve seen some of these film clips of The Stooges live she might have understood.

Mr. Mecklenberg was in a band? Did Jarmusch interview Nona F. ?

Saw this movie at the Michigan Theater in Ann Arbor, MI - Home of the Stooges. Seen a lot of Iggy and a lot of Stooges in my time but it’s still worth seeing a little more in this movie. Really enjoyed the brief looks at vintage Ann Arbor; from a time before the yuppie takeover that is coming perilously close to killing any sort of zen/weirdness that hasn’t already been squeezed out by rising rents.

Here’s about the last time I saw Iggy in the flesh anyway: 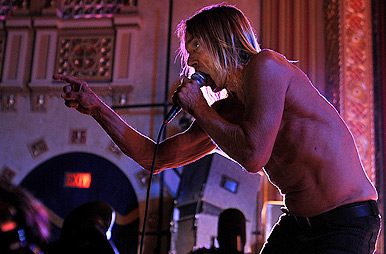 Iggy and the Stooges Honor Their Late Guitarist Ron Asheton

And if your internet connection can stand it here is Jeremy Wheelers site:
http://thisisbangmedia.com/home
and his mini-comic about the night:

made the point that music documentaries should showcase some of the music, because there wasn’t much in this.

Since I was around 20 and first saw this picture of Iggy, it has been my goal to look like that when I’m 60.