Tree surgeon dumps cuttings on customer's lawn for not paying him

Originally published at: Tree surgeon dumps cuttings on customer's lawn for not paying him | Boing Boing

Sounds fair to me. 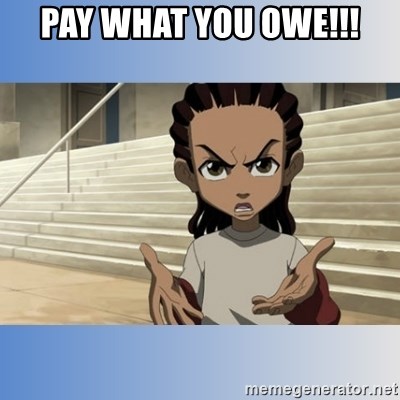 Part of the service seems to include removal of debris, so if the service isn’t paid for the debris isn’t removed. Or in this case, returned.

'You can’t make something look like a Christmas tree when it doesn’t want to be because they’re all dead inside.

I’m not sure how it is in the USA, but in the UK, any pruned bits of tree are property of the owner - that is, of the person on whose land the tree grows. If a neighbour trims a bit off a tree growing over their fence, then they should properly deliver (or at least offer) the trimmings back to the owner.
It seems to me that’s what the tree surgeon is doing in this case. If they weren’t paid for the job, then the trimmings belong to the tree owner. In addition, there is definitely a cost involved in getting rid of the trimmings. Companies pay extra for waste disposal, and even if they were going to shred that into chippings, there’s still the cost of the energy involved.
So, here, Missus. Take your tree back. Sorry it’s in bits.

Mod note: A reminder that we have a policy against victim blaming here - that is, arguments that the service provider was somehow “deserving” of not being paid because of their attitude or that they were “asking for it” don’t belong here.

Mod note: A reminder that we have a policy against victim blaming here - that is, arguments that the service provider was somehow “deserving” of not being paid because of their attitude or that they were “asking for it” don’t belong here.

Question: do we have enough information to be certain of which party was the victim in this incident?

These are literally the questions that are asked every time a victim claims abuse. “Its just her word against his” is not something we’re going to debate here. There’s no question that the tree surgeon was not paid, that makes them the victim, full stop.

There’s no question that the tree surgeon was not paid, that makes them the victim, full stop.

As I noted, Boing Boing had posted an earlier story about a tiling contractor not getting paid and then dramatically destroying his work. A deeper look into that story showed that it was entirely appropriate to withhold that payment. But a ton of hate was heaped on the customer first. This case may well be different but a contractor not getting paid does not automatically make them a victim.

Then it sounds like you should restrict your commentary to forums that won’t discuss news until they meet your standards. Your issues with Boing Boing do not avail you of reasons to violate our guidelines.

I think that we need to look at things from the tree’s perspective here. Did it get the care that it needed?

I would agree with you if this were a criminal case. This isn’t a criminal case. This is a civil dispute. I have no idea what the law in the UK is, but in the US, a contractor absolutely does NOT have the right to do something like this for not getting paid, and a consumer absolutely DOES have the right to withhold payment if they didn’t get what they paid for. We do not know who the victim here is. We just don’t. In the US, you settle this in court. I would assume the same is true in the UK, but I don’t know that for sure. Saying this is ok would be like saying it’s ok for a landlord to shut off your gas for nonpayment of rent.

If a barber cuts your hair and you don’t like how it looks, do you withhold payment?

ETA: If it’s not what I asked for, or if the barber did a crappy job.

I think that in most states in the US, that would constitute theft of service, which is a crime.

If you want to make it a civil matter, I believe that you would have to pay initially and then sue for the return of your money.

IANAL, but a Google search for “theft of service” and barber or salon suggests that the criteria is simply whether or not the service was actually performed.

Exactly.
We had some tree work done this year. They butchered 3 of our sugar maples

(they’ll be fine, it’s just sad) but we didn’t even consider not paying them. What you do is pay them then not use them again, or, if you do, take the role of project management a little more seriously and improve communication and oversight

Or, as you say, dispute the charges through proper means.

ETA: Back to the hair example, I’m not going to be a jerk about it. But if the person cutting my hair cuts off 6 inches when I asked for a small trim and held my fingers an inch apart, I’m going to tell them I’m not paying for that and then we’re going to have a conversation about it and work it out like adults do. But I’m not walking out of that hair salon paying full price for having my hair jacked up.

I don’t believe that goods and services are really comparable. You can send a steak back before you eat it, after all.

With a service, you are ultimately paying someone for their time. Is their time worth what they charge? All I can say is caveat emptor and read the fine print.