Orange juice without the tequila, well I’m just not going to do it, that’s my last word on this.

When I was a kid we sometimes sprung for Donald Duck brand orange juice concentrate, but usually went with the generic store brand concentrate. 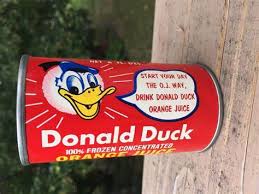 Apparently they got sued by Tropicana in the 80’s for deceptive marketing that implied that the brand was fresh when it was actually concentrated. Not sure if that was part of the reason that Donald stopped being the brand mascot in the early 90’s.

Although, blood orange and Averna…

I’ll live with my misdeeds.

Both designs were created by the same ad agency, Arnell. Business-wise, I’m sure they were just as happy for the second engagement. I wonder about the designer(s) for the older version though.

Did they rename the brand or did they still call it Donald Duck and claim it was named after a different duck also named Donald?

I’ll live with my misdeeds.

One man’s misdeeds is another man’s correctness.

and replace it with a generic-looking glass of orange juice.

I see that style glass and I think “slightly to pretentions breakfast restaurant that over charges for OJ from concentrate that has slightly too much water used.”

It’s entirely possible that customers thought that this was a clear-pepsi-style new product line in the Tropicana family, and were waiting for the “original” flavor to restock. The “clean” graphic design and glass style would have further sent the message that this product was overpriced and fauxtisinal.

Did they rename the brand or did they still call it Donald Duck and claim it was named after a different duck also named Donald?

The company was named Citrus World when it had the licensing deal with Disney, and when they changed the name of the company in 1998 to “Florida’s Natural Growers” they rebranded the juice at the same time, getting rid of Donald.

Of course now that you mention it I’ll bet they could easily strike up a marketing deal with a famously orange Florida-dwelling creature named Donald. He’d probably appeal to roughly 51.2% of Floridians, but also disgust the remainder of them. 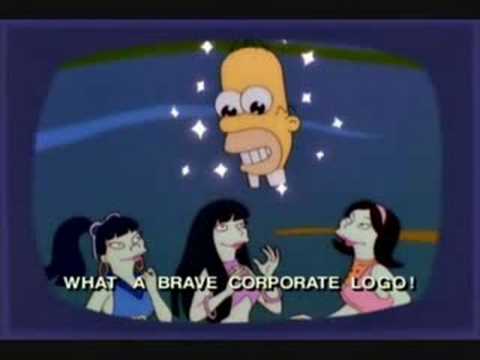 I feel like they could have updated the orange with a straw concept, with out getting rid of it. It certainly looks more generic now.

Sometimes you just slap your head at design decisions. Like these Nike City Connect jerseys. Cool design elements, but WHY is the color not Royals blue?? It looks like the soccer team colors. 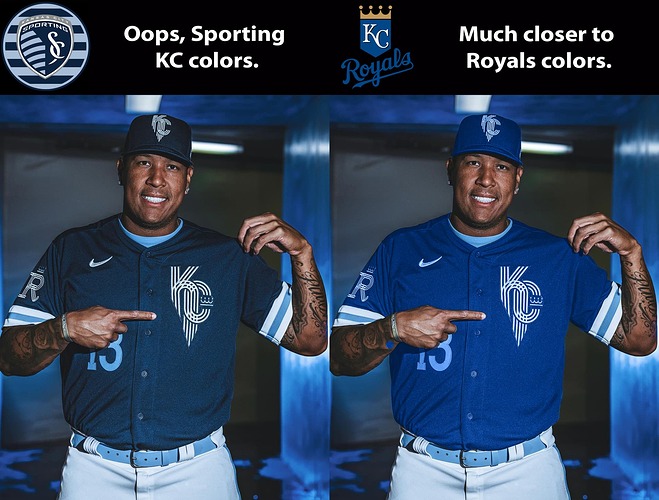 Come now, we need to stand with Ukraine these days, don’t we? Drink
horilka! (although come to think of it, that might not help the standing part).

Horilka (Ukrainian: горілка, Belarusian: гарэлка, Romanian: horincă) is a Ukrainian alcoholic beverage. The word horilka may also be used in a generic sense in the Ukrainian language to mean vodka or other strong spirits and etymologically is similar to the Ukrainian word for burning - hority. Home-distilled horilka, moonshine, is called samohon (Ukrainian: самогон, literally 'self-distillate' or 'self-run' - almost identical to the Russian and Polish: samogon). Horilka is usually distilled fr...

The macro problem is that there are simply too many designers in the world. Especially software designers. Which results in things that are not broke, being badly fixed (i.e. broken) because the designers have to justify their existence by doing something, however stupid. They, of course, think whatever they have done is wonderful.

(Today an app I use on my phone failed me because of a new design. On the old design the function I wanted was one of the 5 options at the bottom of the screen. Because it was no longer there, I assumed it was not available because of a location problem (it was a location-dependent function) and so I checked the location and it was out by 200 yards. So I assumed this was why the function was not there - some clever wizardry added in the last release. But no, it later turned out the function button was much further up the screen not as a button but as a whole panel looking just like one of the app’s other various ‘adverts’ which I habitually ignore. Customer services, when I reported the location glitch - which had happened 4 or 5 times recently - confirmed the latest app update had changed the design, but could give no explanation or reason as to why. I know why: too many designers.)

The macro problem is that there are simply too many designers in the world.

Nowhere do designers make decisions to change up packaging like this.

They, of course, think whatever they have done is wonderful.

This part is true facts.

Drink Florida’s Natural Orange Juice. Owned by a cooperative of growers in FL and is 100% made from Florida grown oranges.