Isn’t that the point of newspeak?

‘The whole climate of thought will be different. In fact there will be no thought, as we understand it now. Orthodoxy means not thinking—not needing to think. Orthodoxy is unconsciousness.’

As long as there was no tongue I’m not seeing the problem.

I need a wiener dog on a trampoline break 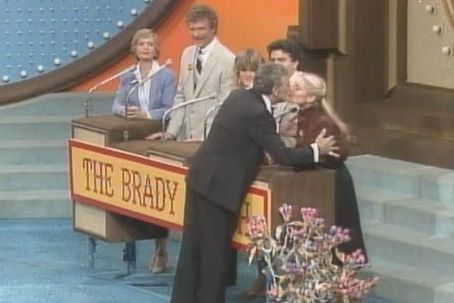 Point taken, but if you were on that show, you knew it was going to happen. That’s different from the random handsiness of Uncle Apricot Disgusting.

Women who appeared on the show were given the opportunity to decline a kiss before taping even started without having to worry about it affecting their future.

Admittedly at least some felt pressured by his position, not to mention tradition.

I think this particular complaint is about a lip kiss greeting in front of others. Granted it’s a surprise but I know people in LA that routinely kiss every woman they meet in social circumstances on the lips - in front of their husbands, if they are meeting the couple - and as they are quite un-disgusting it seems to fly.

I come from a kissy family. I’ve kissed relatives from overseas I can’t even talk to because we don’t have any languages in common, and whom I’ve never met before I was greeting them.

But there’s kissing and there’s kissing, same as there’s flirting and then there’s being a creep. Overly focusing on the act itself, completely expunging it of manner and context, is to miss the point. Anyone greeting anyone in any manner will pay attention to the other person’s reactions to ensure they’re not offending. And sure, sometimes people get it wrong, but generally considerate, respectful people don’t a) brag about it on a hot mic and then b) attack the numerous accusers when they come forward.

I’m not defending him.

I guess you missed the talking points.

If you were part of his target audience you would hear “me strong”, “Hillary weak - she girl”, “Trump strong”, “danger is outside”, “tribe good”, “we protect tribe”

Nobody cares what an 11 year-old girl thinks anyway - she’s not even old enough to incubate the next generation of Christian conservative!

(even if she was, Pence wouldn’t care what she thinks)

Has nobody noticed that isn’t a wiener dog?

You imply that attractiveness makes for inoffense versus other contexts.

Maybe, but it’s still part of a sleazier era that I’m glad is behind us.

Point taken, but if you were on that show, you knew it was going to happen. That’s different from the random handsiness of Uncle Apricot Disgusting.

From the looks of women on that show squirming to avoid his come-ons, the difference isn’t hyuuege and “they knew what they were getting into” isn’t ever a replacement for consent to be touched or greeted with an open-mouth kiss?

My hometown has much more kissy habits to their culture, but it’s not lecherous. What is “better than Trump” still flows from the same font of creepy entitlement to touch based off of wealth and celebrity.

It affects who receives consent.

If you kiss (or grope) someone unexpectedly and they decide after the fact that they didn’t mind, did you act without consent and are you therefore guilty of sexual assault regardless of what they decide?

My perspective is: you’re still guilty of the crime, independent of whether or not the person decides after the fact that they aren’t going to object.

However, the one who performs the assault is never going to get convicted without that person who was assaulted agreeing to testify that it was non-consensual, so no charges will ever be filed.

It’s like being in a big block of cars going 15 km/h over the limit. They’re not pulling you over, true, but you’re still breaking the law.

Then I’ve already broken the law at least once today with my wife.

Then I’ve already broken the law at least once today with my wife.

There’s a difference between explicit and implicit consent.

… then I would say that the behaviour is implicitly consensual.

If any of the above is not true, then yes, that’s breaking the law. If your wife hasn’t objected in the past, then you’re probably okay (but, unless she’s explicitly said that she doesn’t mind you doing it, I’d still ask).

ETA: More to the point, from the perspective of the person committing the assault (assuming that it doesn’t fall under the guidelines of implicit consent listed above), there’s no perceivable difference between the two scenarios for this instance, although the “I didn’t mind” might be construed as consent for the next instance.