Trump calls to kill the Constitution, and all the GOP can do is tremble in silence

Originally published at: Trump calls to kill the Constitution, and all the GOP can do is tremble in silence | Boing Boing

They aren’t afraid of Trump. They’re afraid of these guys.

For a party that drones on and on about values, it clearly has none except for grasping onto power to keep serving wealthy people and corporations.

Pretty sure some of them are trembling in anticipation.

I’m pretty sure that there is no link between the Oath Keepers and this oath breaker. Let’s see who wants to join this traitor going forward. . .

Fixed it for you

there is no link between the Oath Keepers and this oath breaker.

How you figure that? The so-called “Oath Keepers” literally attempted to overthrow the United States government both in his name and at his behest.

Even though it’s starting to wane, Trump still has a solid hold on 38% of Republicans, and they support him over the party. No one is going to criticize him and risk alienating them.

Yeah, in the interview Joyce had the opportunity to name anything, literally anything Repubs are doing to work towards their alleged goals and values and he simply couldn’t. Couldn’t name any piece of legislation. 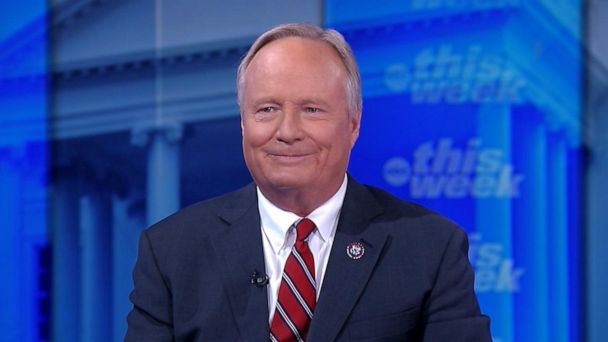 Video ‘Trump says a lot of things’ but that doesn't mean it’ll ever happen:...

It says a lot about this “centrist” Republican and the party he remains a member of that he could be so easily stumped by an empty suit like Stephanopoulos.

Shouldn’t that be shiver?

There’s some irony in the fact that a political party with a strong streak of misogyny is now trapped in an abusive relationship with an angry, controlling man and they’re finding out for themselves just how hard it can be to get away.

Why would the GOP say anything against him? They want the same thing.

Expecting Republicans to act like sane, responsible people in this day and age is a fool’s errand. They have embraced white supremacy, fascism and kleptocracy. Any pretense they want to actually govern this country is laughable.

All the news outlet except Fox are pouncing on every GOPers, such as Dave Joyce, that’ll appear on camera, asking them how they continue to support Trump who wants to terminate the Constitution, at least are fatalistic in their stance: they’ll support whoever wins the primary (even if that happens to be Trump). In other words, they are far more interested in the color than the core of their next leader: i.e. he may be a bastard, but at least he’s “our” bastard.

Joyce waffled multiple excuses, such as I don’t think he’ll win, he can’t really do that, we don’t really take everything he says seriously, and so on. (He being Trumpie, of course). It’s clear that GOPers no longer has a conscience, all must serve the party. GOP is now more Communist than the Communist party.

according to my local MAGA genius, ‘why not, the democrats did it’.

So he’s mad republicans can’t do what he accuses the democrats of doing.

All the news outlet except Fox