Exactly. That’s what makes me sad.

I wonder if the cognitive dissonance arising from the orange buffoon’s fantasies, and the reality of the world he lives in, will ever exceed his capacity for self-delusion and thus cause his head to explode. Or is he smarter than all of us?

Is that hard to see for you? To me it’s pretty clearly a grey, not a green. My understanding was that red-green simply meant that you can’t distinguish between the two, not that you can only see the luminance of red and green colors, so I’d figure the campaign was probably running on the same assumption.

It’s so, so annoying that people keep using these “maps”, when geographical areas have no relation whatsoever with the number of electoral college representatives or even the number of voters. You end up with a constant sea of red in the middle and small, marginalized blue states, which is extremely misleading on all levels.

I think Utah might genuinely go to a third party. Mr. Bells’ side of the family consists of a lot of conservative Mormons, so I hear a lot about this. Mormons generally don’t like Trump. They also don’t like Hillary. And Evan McMullin is polling almost equally with both of them in Utah.

I know my FIL, for one, is planning on voting for a third party because “Utah will go red anyway so it doesn’t matter.” But I think he’s discounting so many people that think the same way. I think Utah has a good chance of flipping, but not to blue.

You’re right, I though GHWB carried it in '88, but it’s been blue for a lot longer. Upon re-reading the original post, I saw that it wasn’t actually part of the Trump campaign’s image, it must’ve somehow flipped in Rob’s recreation attempt. So I guess they’re at least not that deluded.

I think Utah has a good chance of flipping, but not to blue.

Unfortunately, it goes deeper and is partially human nature.

Politics is at least 80% tribalism, with little to no rational thought for most people.

That seems like a gross oversimplification. Never underestimate your opponents. Most people have walls, cognitive dissonance, delusion, wishful thinking - and in fact I think we all do to varying degrees - but that isn’t the same as saying they’re simpletons, even if predictability in their behavior would appear to suggest a shallow inner life. When you’re above average - and I think it’s safe to say you and I are probably above the mean of the bell curve - there’s a danger of assuming average people have nothing going on up-stairs beyond knee-jerk emotion. That, IMHO, is the trap of hubris. We’re all “idiots” in certain ways compared to certain people at certain times. Trump supporters have a raft of social and political failings, but it would be arrogant to dismiss their capacity for rational thought out of hand, even though that would be much easier in the immediate term.

I’ve watched some die-hard Republican voters abandon Trump as his odiousness finally penetrated their delusions about him, even as I’ve seen mumbling closet racists finally letting their bigot flag fly as his hatefulness grew. The latter are a lost cause. But the former, while they aren’t going to stop being conservatives, may become Democratic conservatives. After all, I don’t think many of us really think the GOP is going to return from the brink of fascism if they haven’t by now.

Sorry, getting off my soapbox. Didn’t mean for that to be that long. Not really directed at you @Mister44; your remark was just the jumping off point.

Third-party voting is also tribalism, only adding one more “us” versus “them” to be smug about in one’s displayed/performed identity. 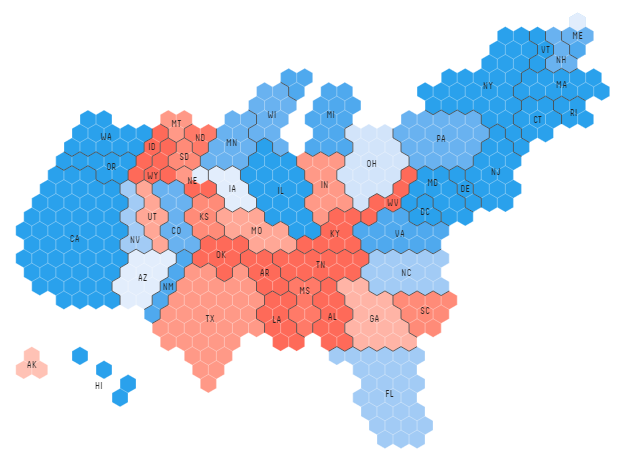 It is an oversimplification. But it is also fairly accurate. This goes beyond the current election. I don’t think this makes people simpletons. But it does make it easier to be lazy. Everyone has some capacity to look at and think about an issue, but it is easier to chide the other side with memes, etc.

In just simple, generic terms, a lot of people are for or against something because either their party are for or against it, or the other party is for or against it. The older I get, the more dismayed I am at this - half the time people don’t really know why they are for or against something - they just toe the line. They might have some inkling, a surface understanding, but they don’t even understand or know of the reverse of the issue - which maybe they might agree with. And the worst part is half the time the politicians don’t know why they ar supporting something. I mean, you hear shit from politicians, and they have no fucking clue WTF they are saying. Like saying we have cyber attacks because we didn’t pass SOPA.

I swear to god, if Obama came out tomorrow and said he encouraged all Americas to take deep, full breaths for oxygen, there would be reports of people passing out from holding their breath.

And my favorite, favorite thing to do is point out hypocrisies. Like, “Snowden is bad and needs to be locked up.”

“You mean you support the Obama administration?”

“But Snowden exposed the domestic spying that Obama administration approved of and condoned. I thought he was exposing the over reaching government you keep warning me about.”

“But Snowden bad, Obama bad, government bad, but domestic spying good, except it is bad… good… bad… error!.. error!!! Party said Snowden bad. Party can’t be wrong or anti-party will be right. Anti-party can not be right.”

Shit now you got me going.

It’s so, so annoying that people keep using these “maps”, when geographical areas have no relation whatsoever with the number of electoral college representatives or even the number of voters. You end up with a constant sea of red in the middle and small, marginalized blue states, which is extremely misleading on all levels.

Maybe change the map so that the proportion of D voters to R voters is shown by colour, and the number of voters in an area is shown by brightness?

That would show most of the country as a faint red, with big blotches of luminescent blue in the cities.

I want to play Risk on this.

“those colored red are states that we can safely assume will vote for Trump.”

Yes, Republican voters. You can assume those states will vote for you. All of you can stay home on November 8, because those states will turn red, even if you all stay home. That is exactly the message that Trump should be sending to his supporters.

I’d make a joke about it being good for a modern-day civil war board game, but I think that might be a touch Too Real right now.

Rob thought of a different game:

It’s been fun to watch the contortions the likes of Sean Hannity have put themselves into with things like this, wikileaks in particular.