Trump can't stop lying about Cuba, or threatening the truth-tellers who expose him

The only difficulty I have with this is the utter stupidity of the trade embargo with Cuba, basically because they dared to have an independent policy in the Caribbean. US treatment of Cuba was no more than bullying, when a more rational approach would have been to build diplomatic relations.
The Trump behaviour seems more and more unpleasant day by day, but if he had said “Yes we negotiated with Cuba. US policy was stupid and counter-productive and if I’m President you’ll see a lot more negotiation and a lot less aggression in foreign policy” - well, it would make sense. (He didn’t, of course.)

I’m not so sure. I mean, I agree with the foreign policy points. But shithead mcCheeto stain has only shown that he will employ aggression, and that he doesn’t give a flying fuck about diplomacy. To the point where he’ll just not pay people for the work he agreed to pay them for. That’s not really negotiation so much as bullying bullshit. 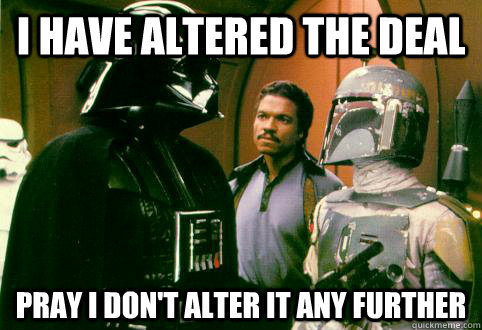 Exactly! I’ve been saying this repeatedly for the last few months, of the two remaining candidates with a shot to win the election, only ONE has actually been found in violation of the law, and if not for corporate interest in making sure their political weight is used to keep penalties for such crimes to fines and other punishments, he would have spent a considerable amount of his life behind bars and building an empire of prison cafeteria Steak franchises, which would ultimate fail and lead to him being shanked in a dark hallway by Bubba, his bed buddy and former protector.

“I’m sorry little hands, but our bed butt time is over when you ruin my meals.”

“But I’m the best butt buddy you had, Bubba. I’m huge, best ever, we’re good friends…”

Hasn’t stopped the Republicans from doing it to Clinton. The Dems always try to take the higher road on litigating political figures, and while I applaud their restraint, it does smack me as ludicrous that they do it in the hopes the other side won’t because it never works. I’d throw the full weight of the Justice System after him now, particularly on his use of his charity to cover his legal fees, not to mention his soliciting donations from foreign individuals… twice (second time after he was warned).

Why? The government doesn’t even prosecute religious organizations with thorough documentation of doing that for decades. Why would they do it against an individual in just one instance?

What I’m saying here is that Donald Trump is the scientology of human beings.

To the point where he’ll just not pay people for the work he agreed to pay them for. That’s not really negotiation so much as bullying bullshit.

Oh, I agree. In fact, Trump as President would pretty much take the wind out of the sails of anyone who wanted to criticise either of the Castros on the grounds of being undemocratic and authoritarian. I just think that US policy towards Cuba was truly moronic and counterproductive, and it would be good if more US politicians admitted it.

And this is the only country that does not define this kind of crime as treason.

What kind of crime?
Actually most countries turn a very blind eye to sanctions busting unless someone is stupid enough to get caught on camera/fail to pay bribes. Most politicians are all too aware that today’s hated enemy of freedom is tomorrow’s valuable trading partner, and vice versa. The last big case I can remember in the UK was Matrix Churchill - which was a criminal trial, not treason - and was stopped when Heseltine revealed that the government had indeed been turning a blind eye to people supplying Iraq, and was trying to instruct ministers that this must be kept secret.

And this is the only country that does not define this kind of crime as treason.

Selling weapons to a country you are at war with may be treason, discussing the possibility of opening a casino in a country that has never done anything to you, hardly.

Trump may have done lots of stupid and criminal things, but in this case I have to defend him. Those sanctions have always been stupid, helping the Castro’s remain in power while making ordinary Cubans poorer. It’s just pandering to Cuban exiles. Some laws deserve to be broken.

I remember a fun discussion long ago on a forum for scuba divers. There was discussion about how nice diving there was in Cuba and an American complained he couldn’t go there. He then got the suggestion that he could go to Canada and fly to Cuba from there, the Cuban customs were normally willing to skip putting a stamp in US passports due to the persecution US citizens faced at home. “Land of the free”, Yeah, right.

The truth will set you free, GOP’ers.

For a while, I entertained the notion that all of this was in service to some truly epic reality TV style documentary.

Seemed easier to believe for a time.

Wage theft being the epitome of that dynamic - steal that much money as an individual, you’re doing a lot of jail time, do it as a company and your victims usually don’t even have any recourse, as suing to recover the money costs more than the money that would be recovered.

Trump may have done lots of stupid and criminal things, but in this case I have to defend him. Those sanctions have always been stupid

The sanctions were stupid, but I can’t defend tRump here. He was publicly very much in favor of the sanctions. This wasn’t a principled stand, it was Donald yet again being willing to break laws in order to get advantages over others and make money. This was him trying to position his company to have a head start over other American companies in exploiting the hell out of the Cubans. His usual sleazy shit, in other words.

It’s really bizarre how the American conservative went so quickly from Cold War rhetoric to loving Putin and his minions.

Trump may have done lots of stupid and criminal things, but in this case I have to defend him

You do realize he lied about it to the Exile Community right? He wanted to be the only person breaking the embargo. He wanted to keep the embargo (and suffering) in place so he could maintain a monopoly on US investments in Cuba.

How can you confuse someone like Trump with an activist?

Trump may have done lots of stupid and criminal things, but in this case I have to defend him.

Then there are the types who just really want Cuban cigars, or want to go sex-touring on the cheap, et cetera. Trump did this for nothing more than another of his skanky hotels, and he belongs in that class.

And I stand by my original point. The US constitution gives a very restrictive definition of treason for historical reasons. Other countries, when they impose sanctions, deem the violation of those sanctions as treason.

I’m a big fan of “some laws deserve to be broken”, but only if the people breaking the laws are willing to stand up and take their punishment to make their point. Not hide it away, try to mask it as charity donations and cover up their crime. And in any case, he didn’t actually do anything to help Cubans, he went there hoping to grease the wheels so if the embargo ended, he’d have a foot in the door of what he hoped with be the lucrative Cuban gambling market.

I personally have always thought the embargo was stupid, and mostly a failure. It certainly did nothing to oust Castro and mostly served to punish the Cuban people. That said, if you break the law, stand up and take pride in it if you think its an unjust law. Worst thing that would have happened is he probably would have paid a fine of some sort (because Trump always settles for fines so he won’t have to do time). But to then campaign in 2000 on a “we’ll keep the embargo strong, we’ll never do any business with Cuba” platform? Yeah, he’s a sleazeball who should have the book thrown at him for anything they can find (this one, though, is beyond the statue of limitations apparently).

He was publicly very much in favor of the sanctions.

I had missed that part.Then I have to admit that he was just being the usual Trump sleazeball in this case too.

I’m a big fan of “some laws deserve to be broken”, but only if the people breaking the laws are willing to stand up and take their punishment to make their point.

In some cases that’s true, but far from always. Take the people who helped slaves cross to freedom in the North. Were they less heroic if they kept breaking the law in secret? Not that Trump in any way aspired to be a hero, but ignoring a stupid law out of self interest can also serve to weaken it. Well, unless you at the same time publicly try to keep it in place.

It seems pretty obvious how the spin is going to go. It was even present, in embryonic form, in the first article I read on this, from the Miami Herald. Yes, Mr. Trump explored business opportunities in Cuba, but then he did the right thing and decided not to pursue them. (The truth is probably that the Cubans said they would never approve any casinos, and we will own at least 51% of anything we do approve, and maintain full control over day to day operations and so Trump noped out.)

My only question is whether this will fly with the Miami hardliners. I don’t think it makes a lick of difference for anyone else, or any state other than Florida. But it might be enough to keep some of those hardliners at home. They’re already a weaker voting block than they used to be, so this could turn out to have a yuge impact for a relatively small story, maybe enough to tip the scales in Florida.

And as a final aside, this is yet another incredibly Rob Ford-like bit of business. I wouldn’t have given a damn what Ford ingested in his free time if he hadn’t been a law-and-order drug warrior blowhard, and I would not have had a problem with Trump breaking the embargo if his public posture hadn’t been pro-embargo blowhard. (I don’t support the Castros or the all-embracing Cuban state, but I don’t support the embargo either.)

You appear to have me confused with someone else or are under the misapprehension that I am a sock puppet for @Bernel (or vice versa). You are wrong.

“support the Cuban revolution,” which I find nauseating,

If that isn’t hyperbole, you should explain why a US invasion of Cuba would have turned out so much better than Vietnam or Iraq, and why negotiation would have been worse than sanctions and threats. It would not have been a walkover against an imagined threat from a tiny island, like Grenada.

Or the French Resistance. In the South they were actually going up against a French government (under Pétain). Should they have made a point by surrendering to the nearest Gestapo post? Remember - legally they were traitors.