Tumblr of tweets from Trump supporters who regret voting for Trump

Let me get the nano-machining center fired up, so I can make a violin tiny enough to play my sympathies.

Stand by for tRump’s next RALLY!

You can see the tragedy unfold in these four Joe Walsh tweets.

I have an idea. They should get together with the equivalent people who voted leave in the UK, commission a really big ship and sail off to somewhere where they can design an ideal society free of SJWs, non-compliant women, brown people, black people, Muslims, Jews and liberals. The name “Utopia” has already been taken, so when they find their ideal landing place - I believe there’s a whole continent down south which is pretty empty - they could call it Bumfuckistan Bozone (thank you @JemmieDuffs) .

His Maserati does 185
He lost his license, now he don’t drive

let Texas leave and they can all move there. We will have to get all the progressives out of that state, but that shouldn’t be too hard.

You broke it, you bought it.

It was so cute they thought he would do these things! now they are going to lose the Medicare and Social Security among other things. Too bad they won’t understand the relationship between their vote and what is going to happen.

We will have to get all the progressives out of that state, but that shouldn’t be too hard.

You could just build a wall round Austin and get them to pay for it, then arrange an airlift.

The name “Utopia” has already been taken, so when they find their ideal landing place - I believe there’s a whole continent down south which is pretty empty - they could call it Bumfuckistan.

It was a horrifying thing for him to have promised in the first place. (As though the question of whom to prosecute is up to the president.)

And now that he’s backed down, I’m horrified by that, too. (It just reinforces the idea that Trump really thinks he’s the king-elect, and peasants are prosecuted/persecuted at his whim.)

To clarify: I don’t think Hillary Clinton should be prosecuted for the emails or Benghazi or Whitewater or whatever.

They were chanting Lock Her Up again yesterday at his “victory” rally.

Trump Exults in Victory and Mocks Critics at Cincinnati Rally

President-elect Donald Trump exulted in his surprise victory over Democrat Hillary Clinton, mocking critics who said before the election that polls showed he had no path to the White House. 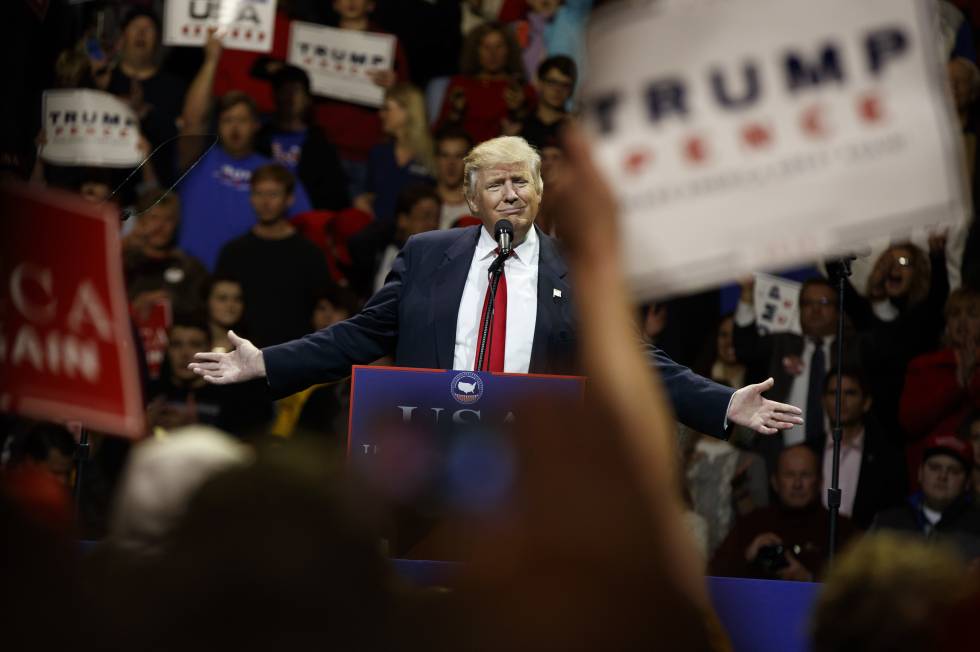 Taking a break from his job of forming the government, Trump goes to swim in a sea of adoration VIDEO

I look forward to all those dumb fuckers suffering because of him. Fuck 'em. They deserve all they get.

Hey!
Herr Drumpf did not lie!!!

No smoke-n-mirrors for the gilded turnip…

Herr Drumpf did not lie!!!