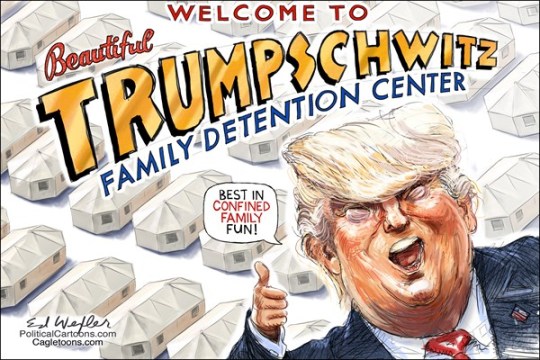 When the court fight gets to the SCOTUS he’ll no longer have to worry about it. By then he’ll have stacked it enough that the smoking gun will be to them what the hypothetical one he’d use to shoot someone in the middle of 5th Ave was to his supporters.

I figured this was worth sharing here.

A Children’s Gitmo on the Border

By the time Donald J. Trump threw in the towel, who among us hadn’t seen or heard the chilling videos in which U.S. border officials shamelessly grabbed uncomprehending children and toddlers from their pleading mothers and fathers? Some were told...

"While this moment of crisis may have passed, consider this piece, at best, a requiem for a tragedy that has barely ended, if it has — and also a warning. The legacy of Guantánamo continues to haunt our laws, our imaginations, and our way of life. It’s time to do what we have failed to do for so long now.

Push back hard on the truly un-American policies spawned by that prison and apparent in so much else of Trump’s America. We need to do so now, before the way of life we once knew is largely erased. It’s time to insist on the right to bring up our children in an America of compassion, law and respect for the rights of all, not in one whose leaders are intent on robbing them — and so many other children — of their future."

One of the reasons the recent SCOTUS ruling on Trump’s self-described “Muslim Ban” is so horrible is that it means he can spout off his big stupid mouth all he wants without fear that exposing the racist motivations behind his policies will turn the courts against him.

Actually, the plaintiff will be imprisoned indefinitely for leaking the President’s tweets.

Well, it already didn’t matter that he called something a “Muslim ban” (both during the campaign and after enacting it). The five members of the existing Supreme Court were happy to overlook the religious dimensions (unlike with their previous ruling about cakes…).

Yeah, that ruling really gave Trump (and Trump alone, apparently), carte blanche to voice the most bigoted justifications for his actions, and they’d happily ignore them.

Baloney on white bread for everybody!