Yeah well, no. Unless there was someway that Trump could redefine it as victory inside his tiny brain, he’d never resign.

“Some point over the next period of time…” Well, that’s…vague.

Man has too much ego to resign.

Unless there was someway that Trump could redefine it as victory inside his tiny brain, he’d never resign.

Give Trump some credit, he can rationalize and dissemble with the best of them.

Trump’s presidency is effectively over.

He’s been counted out before, and managed to claw his way back. I’ll believe it when I see it.

If Chuck Schumer were smart – and really wanted to get rid of Trump, rather than keeping him as a whipping boy – he ought to signal to Pence that, if Pence becomes President, Schumer will help see to it that President Pence gets a couple quick, minor wins. Not stuff that Schumer really objects to, Pence’s view on abortion or gay rights or health care, but there must be a few things where there’s some agreement. If you want Pence to flip on Trump internally, and push an preference cascade against Trump within the establishment, Pence has to know he can run a functional White House as President.

The Dems did a lot of that with Gerald Ford, giving him a soft(ish) landing – allowing him to testify in front of Congress but not under oath about the pardon, etc., working with Ford to rebuild the Department of Justice under Ed Levi, and still were able to run against Nixon in the mid-terms – and it worked out much better for the country.

I’m not holding my breath, but there’s a path here.

Unfortunately, I’m doubtful. He’s been placed on this path to cause maximum damage and is too pea brained and egomaniacal to go any other route. If he had a shred of patriotic intent he wouldn’t have even run in the first place.

Not. Going. To. Happen. I fear that we’re stuck with him until January, 2021. Our best hope is he chooses the LBJ route and doesn’t run for a 2nd term. But I doubt that too, because he loves the adulation of his rallies. Plus modern U.S. Presidential campaigning is the biggest grift going. So, 2020 will be another stomach churning campaign season.

I sure hope I’m wrong, but hoping hasn’t worked for me in a long, long time. Someone talk me off this ledge!

I know for some the distinct realization of President Pence is terrifying…I think we can reasonably agree it would be better than our current situation. This being said, if there is enough evidence in the investigation’s findings to convict 45 of whatever crimes they discover then it was during an election campaign. Wouldn’t this mean Pence is as culpable in guilt as Trump?

This isn’t like Watergate where Nixon acted independently of Ford. Pence had to have known what was going on in some form or fashion and everything is poison fruit from the tree. All appointed and selected people would need to go to?

I know this isn’t what will happen, but shouldn’t it be?

This is based off the notion that the impeachment proceedings are going to start soon. Which neither the ghostwriter nor us have any idea of.

But if indeed the feds are closing in, the axe is about to fall, etc., I think it’s a plausible scenario.

We’re in the Upside Down now; our ability to predict politics is gone. Remember the dozen times during the campaign Trump did something that, merely standing alone, would have ended the candidacy of anyone before him?

Would be nice not to hear his tweets, but really having Pense in charge and a more enthused GOP is hardly the outcome I’m hoping for.

I stand by my prediction that Trump will die in office. Might be next week, might be in 15 years. But I predict he’s not going to step down at any point.

I actually like the idea of a 48-month lame duck presidency better than a resignation or Pence ascension.

The entire regressive GOP agenda is stalled while tRump remains in office - which is not a bad outcome. 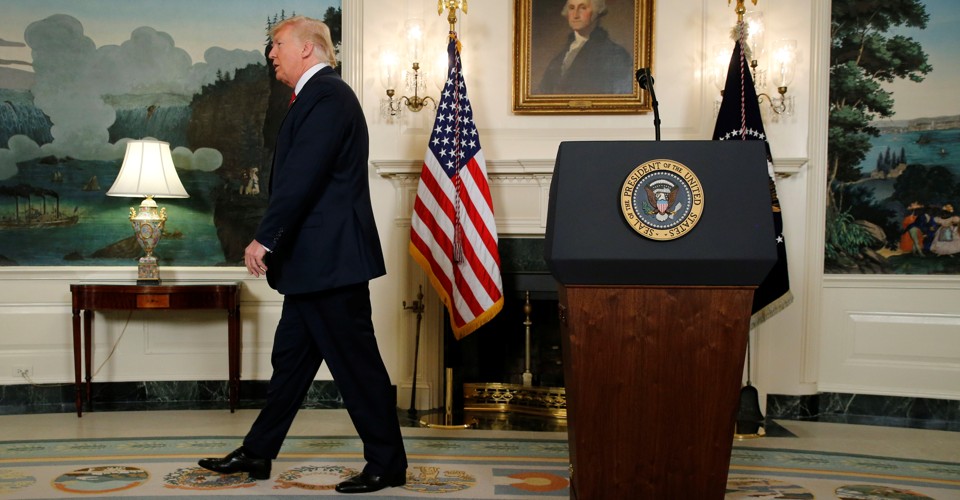 Donald Trump Is a Lame-Duck President

Just seven months into his presidency, Trump appears to have achieved a status usually reserved for the final months of a term.

I doubt Pence is privy to Trump family financial shenanigans which are probably much more likely criminal than any election activity and, in any event, even if there were a whole lot of collusion with the Russians (i) it probably was far more about Trump’s financial obligations to them (see above) and (ii) probably had a lot of momentum behind them before Pence ever signed on.

Even if Pence knew, though, I think we’d do better with Pence than this guy. Whatever you think of Pence’s politics, he’s unlikely to start a war as a way to avenge a personal affront.

As much as I despise Trump, I’d prefer that he stay in long enough (at least through the mid-terms) to do further damage to the GOP and its so far failed regressive agenda. Trump is the foul, sick, genuine face of the GOP, and having him out there, fouling himself, drives his followers away, and away also from the earlier very openly supportive – now late to the table of truth, and calculatingly outraged – GOP congress. Not only that, assuming an early leave, my fear is that it would be brokered to gain the GOP (still in control) points for ridding us of Trump, but with that leave accelerated and greased by GOP promises to sabotage the Trump/Russia investigations which – logically – should go on in spite of Trump being out of the WH.

I would love for Schwartz to be right, but I’m not buying it.

Although I don’t think Trump—he of the multiple bankruptcies—would have any trouble believing that quitting was winning, I don’t think he’s done with us yet.

If one writer started this then another can end it. Can’t we just get one of the people who writes his speeches to pull an Anchorman and sneak a “I resign the office of the Presidency, effective immediately” into the teleprompter?