There’s a Animal Planet series a few years back called “Meet the Sloths” that is quite entertaining and in depth watching.

He was looking for a “quickie”

Hey Deloris, did you know sloths are good swimmers?

…seriously though, i’d have never guessed they could swim like that, way to go flash.

Way back in the day, there were (semi-) aquatic megasloths.

Thalassocnus is an extinct genus of apparently semiaquatic (for the geologically oldest species) or fully aquatic (for the geologically most recent species) marine sloth from the Miocene and Pliocene of South America. Fossils found to date have been from the coast of Peru (Pisco Formation) and Chile (Bahía Inglesa Formation). They were apparently grazers of sea grass and seaweed. The various species of this genus provides the best-documented case of gradual adaptation to a secondarily aquat Tha...

Ugh. Sloths are creepy… they are just laying low, waiting for the chance to strike out and rip out our throats with those long, creepy claws…

Did I mention sloths creepy me out?

Do you think the lizard v snake youtube got borked because of the PE2 video, or the yakkity sax overlay?

Cue the Otis Redding at 16 rpm.

I always thought that sloths were shit swimmers… 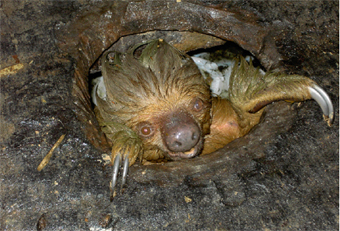 Researchers who have encountered aggressive sloths often end up saying they were astounded by how fast sloths can move when they want to.

Hoffman’s 2 toed sloth is still my favorite animal though.

Please tell me the baby iguana made it, I haven’t had the courage to watch it yet… Call it election jitters.

Please tell me the baby iguana made it

yes, somehow it made it. watching the video is a stressful ride though, there are lots of parts where i was certain it hadn’t made it.

OMG that seriously gave me the shivers…

This makes me want to go back and re-read Stephen Jay Gould’s essay Can we truly know sloth and rapacity?

Not surprisingly he takes some older scientists to task for considering sloths lazy.

Some did. One of them had an amazing escape. Racer snakes…

Thank you for being one of the few understanding…

to be fair, I posted the original attack sloth!

But have some cup bunnies.

Well… after last night, at least sloths are no longer my greatest fear…