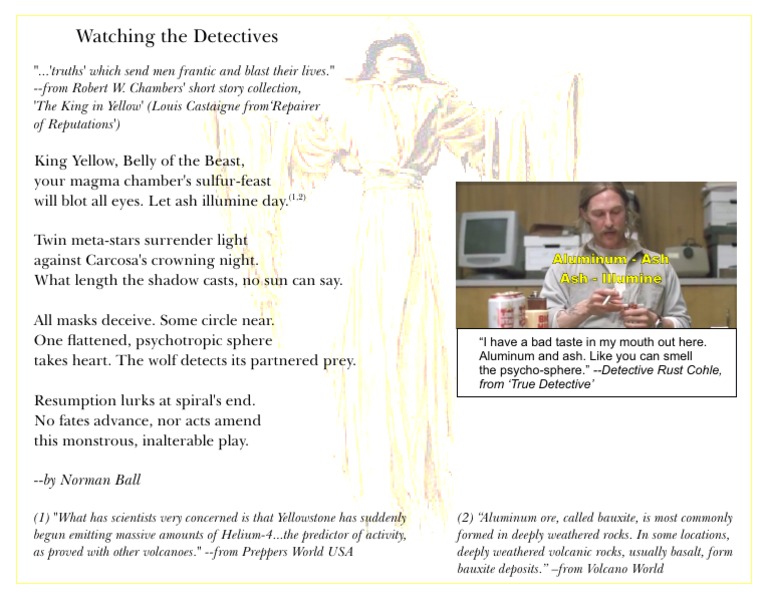 I would prefer more depth there, but does that make it a bad show?

It makes it a lesser show than it could be. Criticism is about what we’re not doing right, it doesn’t invalidate what we DO do right. If creativity was a zero sum game of good/bad pretty much everything would have to be called bad. Relax.

I’m not entirely certain I agree. The show is about the relationship between Rust and Marty. All of the other characters exist to expand on that relationship and to give it depth. The other relationships the characters have, like Marty and Maggie, must exist within the context of that core relationship.

If this were an ongoing series, I’d agree with you. But these 8 episodes clearly have a laser sharp focus on Marty and Rust. Everything else, even- no especially the crime- is secondary to that. I don’t think that core premise needs to change, and I don’t think the relationship between Marty and Rust would be improved by strengthening the secondary characters more.

Believing that anything can only be made one way, and remain effective, is ridiculous. That would be akin to saying: “We could never have a story as effective as True Detective in a world where female characters were on balance as strong if not stronger than male characters.” That’s just shrugging and dismissing the issue because you like something. You can do that, but that doesn’t make the criticism useless, it makes you dismissive because you like something.

Stories in our culture, in general, sacrifice female characters for the sake of focusing and having strong or complex male characters. This is everywhere, all the time. The criticism is to point out how often this occurs, and it’s especially notable when it occurs on shows that are considering boundary pushing, intelligent, critically acclaimed, etc. because it’s important that we’re aware, as a culture, how often we’re unthinkingly sticking to old habits without considering the cost. True Detective will undoubtedly lead to networks desiring more male-centric concepts and shows, because that’s how creativity works in a capitalist society - a “hit” will lead to more of the same. If something is taking off, it’s crucial to point out what it’s weaknesses are because they will be repeated ad nauseum if we’re not extremely vocal about it.

It makes no difference if this is an ongoing series or a feature film. Obviously the approach the creators take is good in certain ways, and to change that would always change a story’s make up, yes, no question. But the real question is why they decided to have a story only about two men in this way? Is it good on its own terms? That’s easily arguable, sure. But it’s “own terms” are arbitrary, and if we want them to change, we have to put down that criticism. If we get to a stage where female characters are actually shining on THEIR own terms as often as male characters, this becomes much less of a concern. But that isn’t reality yet. So criticism remains, and it is useful in precisely the way it’s meant to be.

I think you’re misreading my point- the story is about the relationship between Marty and Rust. Hence, the supporting characters exist to enhance that relationship. You can’t change that without making something fundamentally different.

What wouldn’t be fundamentally different is if you gender-swapped Marty or Rust. I’d be fine with that sort of change, I just don’t think you can really argue that the supporting characters need to be expanded upon.

Well, I’m arguing with your point, not misreading it. We seem to agree up to a point (changing the male characters to female ones shouldn’t kill what the show currently does) but I do still disagree that somehow having female characters that are more than one-dimensional victims would somehow be impossible without fundamentally changing the show, but this would hinge on our definitions of what the show fundamentally is. My argument is that we don’t need a show to be exactly what this show is in regard to its presentation. Is the presentation interesting? Yes. Is the show precisely as it is good in certain ways? Yes. But it any of it necessary to be interesting and/or good? Nope. So at that point it’s a question of priority: are we so desperate for anything resembling quality elements that we say fuck whatever needs to be fucked to get it? Or do we say: okay, good job on some things, but c’mon you could have tried a lot harder or even given any thought at all to these other things.

But my own take is that a truly great writer could do it, period. They could present the same situations and settings and solicit similar (if not directly the same) responses from the audience WITH the inclusion of more interested female cast members. The limitation is in the imagination and the skill/craft. It is not inherent in an end effect.