U Thant, a tiny man-made island you're not supposed to visit

Named after the Secretary General of the UN I assume?

No. That other U Thant.

Trying not to drown huh? Sure, riiiight…

Besides, I’m pretty sure the East River would poison you first.

I wonder if he ever introduced himself as I Thant.

What do you eat at a tiki bar? Some sort of Polynesian cuisine?

I can’t be bothered watching the video. One sentence that says why I can’t go there would be great.

Me Tarzan, U Thant

Damn I want a tiki bar to visit too. Apparently there are only 3 tiki bars at all in Germany (according to google), and the nearest is a 5 hour drive away.

I love these little snippets of oddness about gigantic cities. The fact that there’s probably some city department in charge of the place is amusing.

Certainly the cormorants seem to enjoy it.

Also nice to see real estate interests don’t always win out or there’d be a thirty-five story luxury condo building there by now. (Granted they’d be 89 sq. foot condos but they’d still sell for half a million each because the five minute commute would rock…

The “I just capsized, officer” defence…
We’ve all used it right?

That other U Thant.

This would make a great addition to Atlas Obscura, if not already posted there. I am too lazy today to check. Maybe tomorrow. I thant today.

The east river has some of the most treacherous water anywhere on the east coast. Plus a million coast guard boats and police boats. Drowning or getting arrested is a distinct possibility. It’s quite fun if you time it right but could definitely kill you.

Here’s another snippet for you (another New York snippet, in fact); the New York City Dept. of Sanitation has an artist in residence. Which is strangely cool. 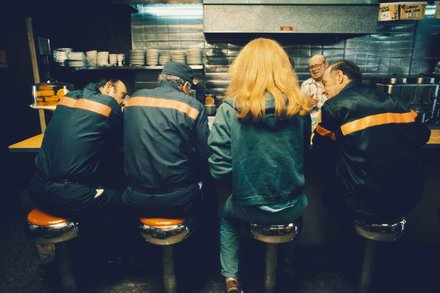 An Artist Who Calls the Sanitation Department Home

Mierle Laderman Ukeles, the unsalaried artist in residence for the New York Department of Sanitation, is having a retrospective at the Queens Museum.

“Unsalaried”? I guess he gets to keep anything he finds. NYC, one odd place.

There is a local NYC podcast called “The Bowery Boys” well worth a listen if you are into this kind of intriguing trivia.

In Burmese, U is a title of reverence for men (as Daw is for women, so Aung San Suu Kyi is often shortened to “DASSK”).