Ugghh, these popup video ads in BBS are yucky

I admit that those of us who use Ad Blocking software are probably the reason why you need ever-more in-your-face ads, but every time I experimentally turn off Ad Block for BoingBoing, I turn it right back on again.

Right now on BBS we get videos that autoplay and pop in and out of existence as you mouse around. It’s super annoying. Is this the way it’s supposed to work?

I just opened the BBS up in IE9, with zero filtering and full trust and ActiveX. All privacy options off. There were no ad at all.

I think your machine may be infected. Or your ISP could be injecting ads. They like to do that too. I’ll turn adblock off, but I’m NOT turning off NoScript and Self-destructing cookies. I don’t care if it hurts a site’s revenue, I’m not handing my data over to Quantserve and Scorecardresearch. Not willingly anyway. If a site wants to run static image-ads, then that’s what I’ll see.

Letting unknown 3rd party sites run arbitrary scripting in the browser is about as stupid as carrying around a big bag of your housekeys tagged with your address and handing them out to cashiers, and putting them in people’s mailboxes and leaving them on park benches.

It was very weird – I only saw them on BBS, and didn’t see any other strange ads anywhere else online.

I haven’t seen them since. It may have been the ISP, I guess, if BB doesn’t admit that they were experimentally running ads on BBS. Unfortunately I don’t remember what network I was on at the time, so don’t know who to call up and shout at…

I don’t think it was BBS. I run a variety of vanilla browser’s and haven’t seen that type of injection. Will respond with forensics if I do.

FWIW I use quite a few different machines-browsers-OS’s and no pop-ups here.

Nope, it’s definitely still happening. I only see these ad on Boing Boing. It’s not my ISP (I’m at work with a very reliable ISP). It’s not a virus (I’m on a secure Mac, and again, don’t see this ad on any other domain).

I haven’t seen it on BBS again, but here that same Ford ad I was seeing on BBS, now on the main page: 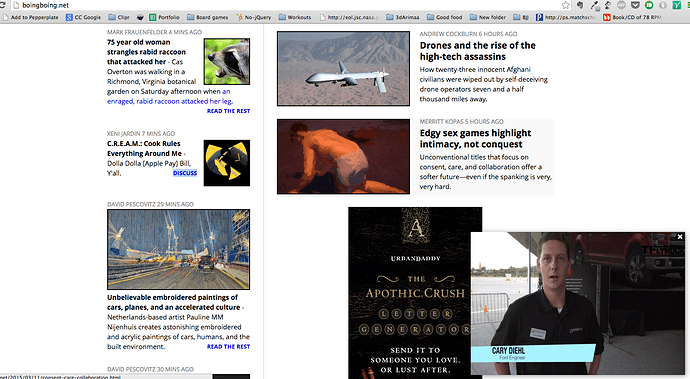 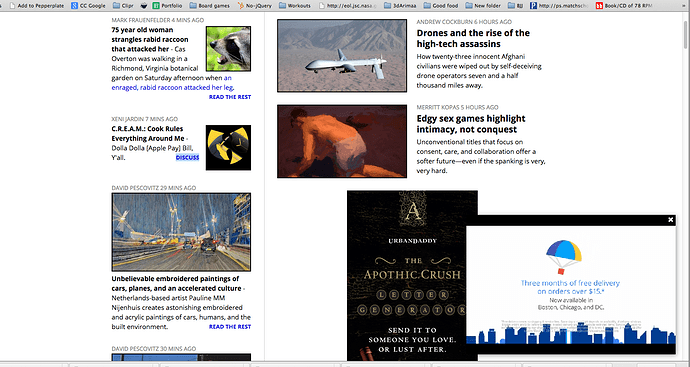 Note that there’s also a Google Express ad in situ in a regular location (next to some other video, but at least that one’s confined to its box), so almost certainly provided by the same as network. 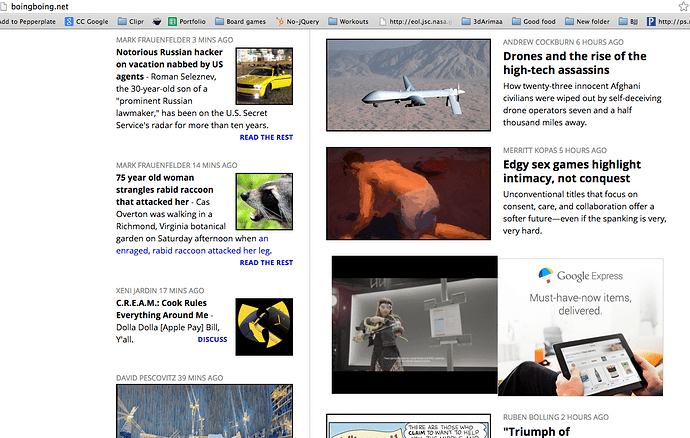 I’m pretty certain now that the ads on BBS in my first comment were really on BBS, and not just some oddity I was seeing.

Since I haven’t seen them again, hopefully it was an experiment that went awry? @jlw?

I use the BBS a lot, I don’t have any ad filtering, and I’ve never seen an ad, much less a pop-up.

Nor me, until 2 days ago. And I haven’t seen it since. That’s why I figured it was an experiment BB were running, that they shut off quick.

This topic was automatically closed after 711 days. New replies are no longer allowed.