Video about Amazon Go, retail store with no checkout lines or registers

I don’t think Amazon want’s to be in the business of underwriting those customers.

Came here for this, was not disappointed.

Well…somebody had to do it…I was elected (by me).

The way it used to work was you would pay cash up front, and you could take anything from the store as long as your total didn’t exceed what you paid.

Flash forward 30 years after mass adoption of this concept. Poor people no longer have a clue what money even is anymore. “Buy” too many things and their contract for menial work is automatically extended. (What would form would that menial work even take?)

There’s a dystopian Science Fiction story in there somewhere.

Until the shop YulBrynners you.

And the digital divide deepens.

Imagine your grandparents live next to this store. You are required to setup and maintain their accounts, as with all other digital technology. When there is an inevitable mistake in the system, you must submit multiple forms and wait hours on hold to get back the charge for that $20 organic cheese they picked up and put back.

Now imagine that these are not your grandparents, and they dont have a tech savvy grand child, so they cant setup an account in the first place. They decide that they would rather drive to the further away grocery store rather than deal with the intimidating new social-technical construct on the block. Then the grandparent who drives because they dont yet have cataracts breaks their hip and cant drive anymore.

Technological development is not bad. Rather, we are bad at estimating how valuable something is to our society because we cannot instinctively understand the needs of people with experiences different than our own. But the capitalist system responds actively to the most valued demographics’ perceived needs, pushing us all towards systems that further marginalize the needs of people who are already being under served.

The same technology that makes this proposed store possible could be used to make existing stores more accessible to people with mobility restrictions, non-visual people, etc. But that is not considered exciting enough, it does not ignite that sense of ‘future’ that has built up in our culture, that thing you think of when you ask Siri to tell you the weather report.

most of the world where the majority of people are unbanked

I don’t think this is true any more. A majority of people worldwide own a mobile phone. According to a recent Economist article, by 2020 80 percent of the population will own a smartphone.

Of course you don’t necessarily need a bank account to own a phone- many of those are probably PAYG phones kept topped up with cash. But if you have a phone you can make electronic payments.

Poor people no longer have a clue what money even is anymore.

Sounds pretty classist. It’d work better if you add scrip into the topic.

I’m sure Wal-Mary already pays some persons on debit cards, so the concept isn’t even science fiction.

As a cashier at a grocery store I think this is a very cool but extremely flawed idea. I have yet to see any automated technology in this field perform even remotely reliably, let alone faster and more efficiently than an actual casher. Maybe if this is treated more as a test bed than a market model (I doubt it, they are probably going to sell this as the next best thing) it will have more success.

However I imagine that for at least the first few years the front end of the store will require the attendance of multiple tech specialists and assistants to help customers work through all the unpredicted issues that will definitely come up. Right now it definitely sounds more like a gimmick to me than anything actionable, but I’ve been wrong many times before so maybe I’ll end up eating my words.

I’ve been in the self service line behind old people who didn’t know how to scan items, so I’m tempted to agree. If all someone has to do is walk or of a store with something to pay for it, everything’s okay, but there has to be some kind of really weird user error that complicates things. Accidentally walking out with an item is just one such complication.

I bet they have some interesting corner cases. Does my young child get attached to my app? What happens when they pick up a toy and try and walk out with me. What happens if two people with the app are shopping together and one person picks up something for the other person. Does it detect hand-offs and move the item across carts? Or does person A have to return it to the shelf and then person B pick up it?

It doesn’t seem to support non-packaged items like fresh fruits and vegetables. That’s a pretty big problem for the way I shop at least.

“Our automatic cameras sense whether you are European descended and can just board your plane and go, or if you aren’t, our helpful security personnel will interview you for hours determining if your initial destination, or another one chosen by them, is best for you!”

It doesn’t seem to support non-packaged items like fresh fruits and vegetables.

reminded me of this 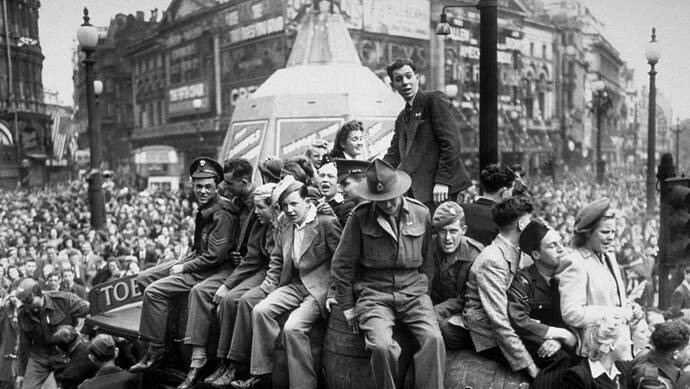 OPINION: We've been living on wartime rations for the last two weeks. It's been an instructive experiment.

Judging from the appearances of everyone in that video, I’m not beautiful enough to shop at Amazon Go. Oh, well. I guess that’s why they have a delivery service, too.

They certainly cater to every flavour of hipster.

That video made me want to jump the turnstiles on the way in like a fare evader at the train station. I wonder how long it takes the Amazon cops to get there and rough you up?

No, no, no! The whole point of my half assed statement was that since there is no checkout the poor regress to where they don’t even know they’re spending money.

Do I have to write this story myself???

Really strong electro-magnets that suck everything you can’t afford back into the store as you try to exit?

Of course there is the restocking fee so they take back one additional item as well.

Sign on the door… “No Faraday Cages allowed in store!”

Another addition to the “Places I won’t shop” list. I like Amazon, but if I step into a store I want it to employ people. I don’t use self checkout, and I won’t use this.