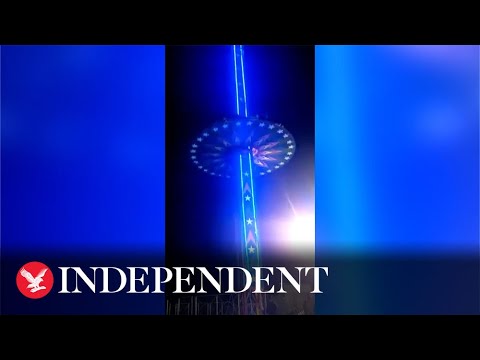 NOTE: There is a huge difference between 50 feet and 50 metres… Which one is it?
One hundred sixty-four feet or 50 feet? Maybe check your sources before posting…

I am glad everyone will be okay.

This is what happens when you want to copy the effect of a ride that was designed properly, without adding the requisite safety features. Controls on any such ride should be designed to fail closed, like a truck’s air brakes. I’ve never seen that many people on such a ride; that might also be a factor. You can’t just scale up something like that.

This is what happens when you want to copy the effect of a ride that was designed properly, without adding the requisite safety features.

I’ve been looking for information on the ride manufacturer but haven’t found any details yet. Who knows what the ultimate cause of this accident was (poor design, poor maintenance, misuse, etc) but this was a fairground ride in a not-so-major city in India, and similar fairground rides are barely regulated at all in many states in the U.S.

I found this in an article:

In India these Amusement Parks and Theme Parks only need licenses when it comes to starting operations, such as license from Municipal Corporation, no objection certificate with respect to pollution, health and food license from municipality. However, there is no specific law governing and regulating the same, no provision for regular safety audits, no mechanism for checking and auditing device safety, no provisions for investigations for serious accidents. A non-profit organization named Indian Association of Amusement Parks and Industries has been established in order to promote safety regulations and smooth and proper functioning of such parks and you have already read what they have stated. There are actually a detailed set of guidelines formulated by the Association which have been adopted by the Union Government’s Bureau of Indian Standards, applicable to both permanent and portable amusement parks. However, the core problem is these guidelines are only recommendatory and not mandatory. Hence besides occasional inspections by local authorities, these amusement parks are largely responsible for self-safety checks, in house safety audits, which no one governs whether they are actually doing or not.

It may turn out that it’s a crappy design that may have still been perfectly legal in the area it was operating.