Video: Florida man gets off verrrrry lucky when alligator he's recording lunges at him

Originally published at: Video: Florida man gets off verrrrry lucky when alligator he's recording lunges at him | Boing Boing

Hey, people! Just because your cell is on you, doesn’t mean you have to take pictures and videos every fucking time! (Hear that, Mom?)

The zoom function is your friend, amateur wildlife photographers. After watching a few professional shows where a gator leaps from the water to grab prey eating or drinking near the bank, there’s no way I’d get within 100 feet of something like that! Remember the guy who was fishing and was chased by a gator? 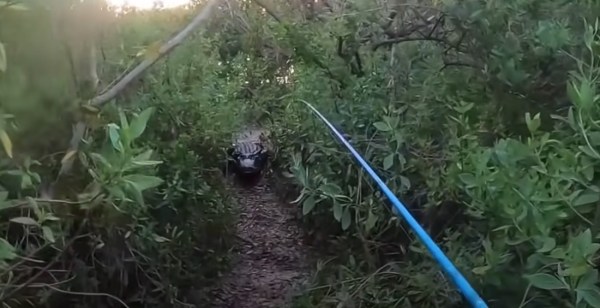 Tommy Lee, 22, was fishing for tarpon in the Florida Everglades when one of the locals emerged from the water to greet him. “And I am outta here. Screw that.”

On the bright side the gentleman was able to give a glowing testimony about the capacity of Depends. Perhaps he’ll get paid for the free publicity. /s

first, let me clarify that Largo, FL is nowhere near Key Largo, FL. just want that established.
but serioisly folks, leave the gators be. just get out of the way! probably best to sticking to selfies with bison at Yellowstone . (NO! don’t do that either! that is also a very bad idea)

While I am by no means proud of my birth-state for, well, any reason whatsoever when measured against the vast continuum of human morality and stupidity…. this was not an aggressive gator. The fact that he stood there and stared it down, provoking an incredibly mild response, is entirely the fault of the hairbrained yokel who filmed it. Gators aren’t smart and they’re largely avoidant of people… if it snatches your poodle that you insist in waling unsupervised along the waterfront, or charges ever-so-mildly as exhibited by this video, then you’re almost certainly the one to blame. Stay out if the gator’s house and yuh won’t get bit.

An observation made by Archie Carr PhD, a Biologist and lover of all things wild noted this: A number of the bigger crocodilian’s are perversely unable to see the special nature of the human animal and absent-mindedly eat him from time to time. 1940. Bearing that in mind I make it a point never to unduly piss off any member of bigger or even medium sized Crocodilians. They really just don’t give a shit.

Also, this gator is NOT massive. It’s what I would call “average adult” size.