At least, I presume it’s his. He’s Control so would be ultimately responsible for all the office equipment.

A Who song on the radio just reminded me that there was at least one wang in Quadrophenia. Maybe 2? I saw it so long ago that the details are a little hazy.

There’s a penis shown in The Crying Game?

just going to pause for a moment to reflect on how much I love “The Pillow Book,”

I spent SO MUCH time and money hunting down Guesch Patti’s albums in the pre-Napster, pre-Amazon days thanks to that film:

films wherein one has seen a wang?

Oh! Oh! I remember! A Room With A View. Actually watched it in a high school English class, permission slips and all. 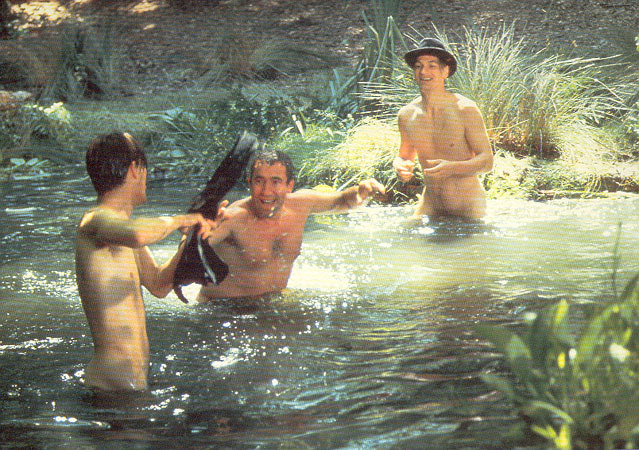 If you’re a Greenaway fan, I might not need to say anything about “Prospero’s Books” - almost the entire cast is nude, so there is more Wang than a 1980 data center. Also I love that it is one of Greenaway’s most ambitious and beautiful pictures, without the undercurrent of morbid cynicism he sometimes dwells upon.

That’s a film based on Shakespeare’s “The Tempest”, right? One of my best friends told me to watch it over a decade ago, but I still haven’t gotten around to it.

The Cook, The Thief, His Wife and Her Lover ?

There is a cooked (baked?) wang visible, but I do not believe it to be real.

That’s a film based on Shakespeare’s “The Tempest”, right?

It is fantastic. It combines text and live image in a fantastic way. Some of the visuals are very much a development from Greenaway’s previous work with the artist Tom Phillips. A TV Dante. more.

My favorite Greenaway film is still The Falls, but I haven’t seen Vertical Features Remake and others. [Good Lord, I think I’ve skipped half of his films. WTH is wrong with me ?!?!]

Back to the subjet: while Prospero’s Book features a lot of nudity, the principal, John Gielgud is not nude. :::sigh:::

My favorite Greenaway film is still The Falls

The Falls desperately needs to be on Blu-Ray! Especially so the audio can be remastered, it really suffers on a 3 hour DVD.

If one were to ask “Hey, Michael, what is your obsession with the words wang and dong?!?!”, neatly sidestepping any suggestion that I am obsessed with the things* the words represent, which is not the case, I would proffer a couple of answers:

* “Everybody knows that things go better with with Coke!”

I haven’t seen Vertical Features Remake and others. [Good Lord, I think I’ve skipped half of his films. WTH is wrong with me ?!?!]

my wife has to keep telling me to stop talking to the kids about poop.

My wife has long since given up that fight as a lost cause. But as far as the words go, wang and dong have that onomatopoeic bell-like quality that kinda announces the referent’s presence like a comical slap upside the head. Much like one of my favorite Python jokes: “What’s brown and sounds like a bell? DUNG!!”

And wangs are funny and undignified and certainly need every last bit of mystery and majesty and power stripped from them. They are treated as totems of masculine power and terror in Western culture, and truly need to be mocked as the ridiculous bits of flesh that they actually are.

IMHO, the only thing goofier than a penis is a running pair of buttcheeks.

e.g. Velvet Goldmine (I’m pretty sure…it’s been a while)

Someone learned how to all-caps a subject, and they are so excited!

In Velvet Goldmine, Ewan was scripted to only moon the crowd, but he apparently decided that the scene needed little Ewan as well.