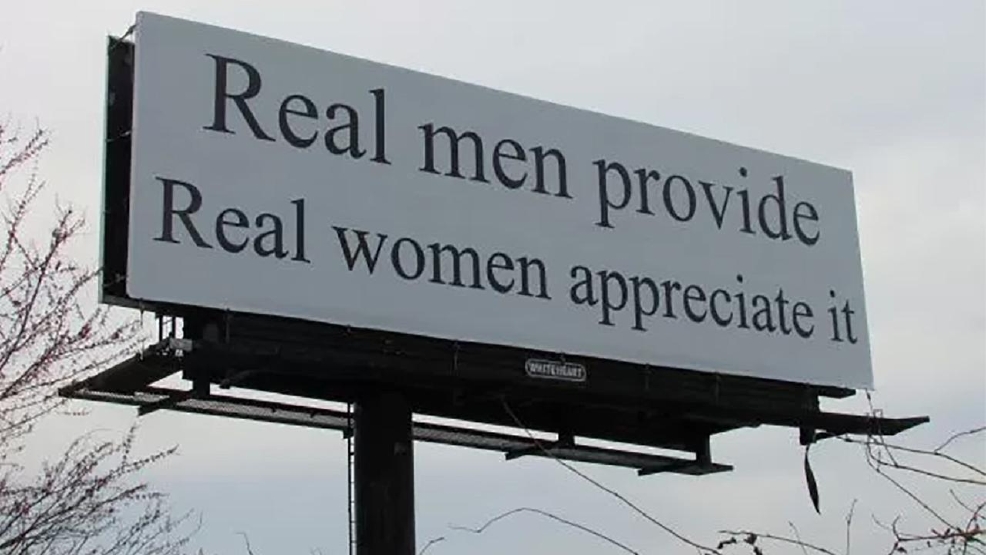 RALEIGH (AP) -- A North Carolina woman is raising money to pay for a new billboard to counter one criticized as sexist and misogynistic.

A GoFundMe has been set up to raise money for a billboard to counter the one that stirred controversy last week with its message that “Real men provide. Real women appreciate it.”

Nearly 100 people demonstrated Sunday against a billboard’s message that says “Real men provide. Real women appreciate it” by creating their own signs promoting equality among the genders.

On the plus side; it’s kind of nice to see that ‘real men’ are apparently so proud of The Natural Order of Things as God Ordained that they are insisting on anonymity for this particular ad buy.

It would also appear that graphic design is not one of the things that real men provide(edit; nor is punctuation, though sniping at punctuation issues in an edit is a…potentially fraught…activity).

It’d be nice to be rid of the retrograde entirely; but the fact that they apparently deem exposure to be more risk than reward seems like a plus. ‘But they want to remain anonymous!’ isn’t always a redeeming feature; or redeeming enough to compensate for the problem(see also, KKK’s at times rather effective use of anonymity); but, especially when the anonymity isn’t a response to legal risk, it can often be a good sign that the speaker is aware that they are not only on the losing side of the fight; but won’t necessarily even be able to bask in the adulation of the like-minded.

Even in a jurisdiction with fairly aggressive ‘hate speech’ laws, a billboard this banal would be pretty low risk; and in the US the risk is effectively nonexistent, so it’s hard to interpret a desire to avoid being connected to the sentiment as anything other than a somewhat pusillanimous admission that it isn’t going to be well received.

I hadn’t thought of that! If they were real “men”, wouldn’t they be crowing how they put that billboard up for the “simple” women?

Oh they won’t cause they know the “simple” women will kick their asses!

Glad to see that N.C is not completely lost to the Dumb Side.