Watch an orca drag a boat around by its anchor chain

Marine mammal version of “Get off my lawn”?

“Mrs DeVos? You know that incident with your runaway yacht? We may have a lead on a possible suspect …”

began pulling a boat around like it was a toy.

Watch an Orca boat being dragged around

Where’s Richard Harris when you need him?

Second video is not an orca. Cool video. The story of this whale is even more interesting; it left its pod and stayed in the harbour for weeks. People got concerned. In a “scientific” first they lured it out to sea with a recording of his best buddy in his pod. But then just left him there without actually connecting them.

Or maybe the Yrr are here at last and it has begun.

Sucks. I would bet insurance is not going to pay out on that.

Someone parked in his space, that’s all.

No one got hurt so I laughed a lot at the orca video. Thank you!

Couldn’t tell if the whale in the second video was stuck in the anchor line (that’s what the folks talking in the b/g thought, anyway), or goofing around.

And while we’re on the subject of unsettling whale behavior, what about spyhopping? Gah:

Good old human hubris, eh? Unless there’s a danger to the orca, or likely damage to boats, shouldn’t we let the orca decide where it wants to be?

Not related, except geographically. I was near Comox just a couple of days ago and the forest fires around there are pretty bad. Haze everywhere. I may even need to pull my kids out of summer camp early.

On the plus side, the sunsets are beautiful. 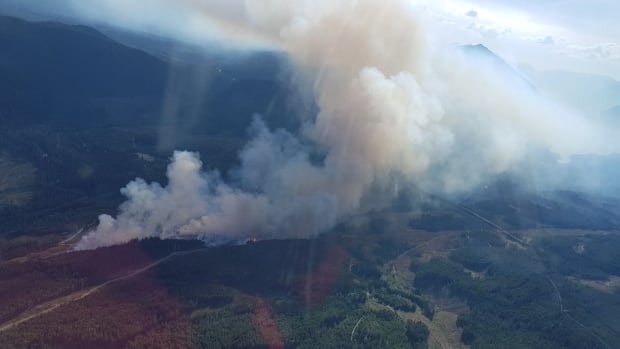 The Regional District of Nanaimo has declared a local state of emergency because of a growing wildfire. Navigate the CBC's interactive map for the full wildfire picture across the province.