New York is a very big state and only certain parts of it contain voters that are near as liberal as she is. It would likely be a waste of her time and energy if she were to run for Congress. She has been supporting likeminded candidates in various races which may continue to be her best way of moving her agenda forward. 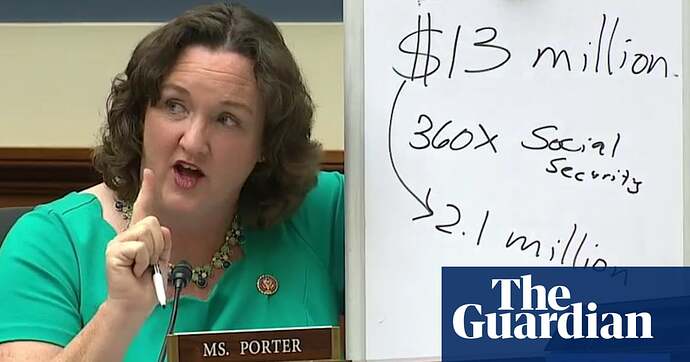 She’s not a Socialist. She’s a Social Democrat. The “Socialist” talking point is a GOP talking point. She’s only “far left” by US standards.

I’d fully support her if she ran, but I don’t think the country is ready

If you think that, why assume everyone else isn’t on the same page?

The supposed “typical Democrat voter” is a fantasy figure that politicians have created for themselves to answer to, and when you vote for them because you want democracy or healthcare or labor rights or whatever, they claim you are that straw man, and hold up your vote as proof that you love the defence and finance and insurance industries and not rocking the boat. If it’s not true of you, maybe it’s not true of anyone.

It’s definitely not true of America’s biggest political bloc, i.e., non-voters, who are ready for anyone who isn’t what the establishment declares to be electable.

What’s certain is that the people who voted for Turmp didn’t worry about whether the country was ready.

Statewide races are kinda of a lock for Dems in NY State. The population disparity between the cities, especially NYC, and the red areas is massive. Nearly 50% of the voters in the state are in NYC limits alone. Buffalo, Albany and NYC together have more voters than the rest of the state combined.

Quite a lot of the Democrats in the state dislike people like Schumer and Cuomo. They reliably win on top of being the Democratic candidate.

If AOC ran for Senate she’s win on the same massive demographic skew.

The problem would be getting the nom. Older, white primary voters in those red districts either don’t like her or default to the “electability” excuse.

The Democrats need their own version of the Young Turks

They had one of them. They currently run the party.

The New Democrats coalesced around guys like Bill Clinton in the 80s. Gained traction by shifting center right after the major losses through the 70s and early 80s.

A result of massive right ward shift in the American public.

We’re due for another one. As there is a similar, massive demographic shift in the other direction going down.

But the progressive movement and left wing were eviscerated in the meantime. There isn’t an organizational baseline for it, and there isn’t a critical mass of in office candidates in most places. The left either compromised to do what they could to cling on in the bluest environments. Or they lost elections. For 30 years.

What we’re seeing now is a party built for that environment cling to what worked for their entire political careers. And the early organization of the next Young Turks style transition.

I wasn’t clear - and I agree with you - she wouldn’t get the nomination. It isn’t because of electability. It is because she is far too liberal for most voters in NY State. A good example is Cynthia Nixon losing to Cuomo or this week’s win by Gov. Hochul. NY State just isn’t as liberal as AOC. FWIW - she’s great in Congress.

Cynthia Nixon is a terrible example.

She ran from a baseline of no political experience, where her major visibility was from a long off the air hit show.

She ran a fairly limited campaign. Mostly predicated on cities, and weirdly over focused on NYC.

All while not doing well or having much appeal in non white communities. Which are absolutely critical in the urban areas she was focused on.

She probably would have played well running for NYC office of some sort. As it is it’s suspected Bill DiBlasio pushed her to run to test the waters for his own rumored plans for a governor’s run.

She’s not a great example of anything on that front.

Those too conservative voters in red districts tend not to be voting in the Democratic Primary.

That whole outside the cities, big state bit we talk about is about where the Republicans are.

AOC will have issues with white, older voters in subburbs. There are enough of these people in the red districts for them to be much of a factor primary wise. But more suburban areas are denser. The problem is less that people are too conservative. Than the primary voters here are equal parts blue dogs and older center left folks stuck in the idea that you’ll scare off some one else with anyone too far left.

I would vote for AOC no matter which race she decided to run. She’s smart, capable, knowledgeable, and seems to care about improving government and making it work for the average person. If that makes her un-electable, then that shows how fucked up the system really is.

That said, I’d vote for Porter or Schiff or Warren or Abrams and any others who aren’t already bought and paid for by dark money and corporate and billionaire greed.

I think after electing the crapulent, lying, racist piece of shit Trump that we can safely say that all bets are off, anyone can become president.

Absolutely agree. If people like AOC or Warren aren’t electable, then it hardly matters who runs, because it’s just over. We’ve needed real progress for decades and we’re not going to get it from Clinton or Biden. Slowing down the destruction is not enough. We’re rapidly reaching the limits of what we can survive as a country and as a species. If people can’t stomach an actual progressive candidate, their foot-dragging will murder all of us, themselves included.

AOC has a clear pathway to winning the presidency, and that’s because she can fire up Americans who are under 30 to get out and vote. I can’t think of anyone, off the top of my head, who can literally create a new voting bloc that would be so influential.

Elisabeth Warren for president and AOC as speaker of the house.

Some tension between the two could actually be a good thing for Americans. Teaches them to see the many nuances of a liberal/left/green agenda and shifts the overton window waaaay over towards the left.

Obama seeming came out of left (no pun intended) field too with about as much, or less at this point, recognition than AOC. It may be a long shot, but some of the biggest most popular presidents from Lincoln to Theodore roosevelt to obama were more obscure than she is at this point. not saying she’d win or that it’s possible, just saying people wouldn’t have thought that of some other people too. All she’s really missing compared to those others is some lucky chance like being nominated as an unlikely Vice President or being a compromise when no one could decide between more likely candidates… but she’s no less qualified or popular than many past presidents. It’s unlikely, but I wish those unlikely cards would line up…

I will say what she DOES have compared to other popular and legendary presidents is intellect, drive, integrity and guts. Really, luck and party favor is the only part missing so far.

In this country? Who knows. I think AOC has a better than average chance, but I am SUPER biased about it and really don’t know how moderates see her (I do know conservatives DESPISE her, but she doesn’t need to appeal to them).

Honestly, despite all the advances we’ve made in the last century, I still think America is so deeply racist and sexist at its core that a woman, especially a woman from a marginalized minority, would have an uphill battle of winning the presidency. Their best path is to stay out of the cabinet entirely to avoid any chance the opposition could drag them into manufactured controversies the way they did to Hillary with “Benghazi, Benghazi, Benghazi!”

You know how far right the country has become when someone who would be considered a moderate in europe is called a far left monster by various folks. As much as I think she would possibly do a great job, she’s gonna have a difficult run unless she brings in a ton of new voters from gens y & z to counterbalance older voters who would be scared of voting for her initially. Assembling a new power bloc is the only way she could move forward in a national election.

That’s kind of my thinking too, with regard to a woman from a minority population. Sadly, a white male still has the best chance to get elected.

Lost to the incumbent who she beat in a primary. That’s why he was running a write in campaign.