Brave souls, good on them for the rescue. Never turn your back on the Sea!

So in some cases Florida People can rise about the Florida Man moniker. Lucky save!

“First, [Human chains] only work if the water is shallow enough that everyone’s head is above water. That’s unusual in most areas. Second, if there’s any meaningful surf action, people won’t be able to stay put, as they will be battered by the surf.”

Panama City is on the Gulf Coast which has very shallow water with little surf (but often real bad riptides). Its the conditions that a chain can work.

Last year (just a few miles down the beach from there) a man died in the surf ~200 ft from me. Very glad this time turned out better

Mostly this was just Florida people flaunting the 6 ft apart rule. Saving the woman was just a fortunate side quest.

In civilized states, we have these things called “Life Guards”. Of course, that is because we are nanny states.

The United States National Oceanic and Atmospheric Administration comments:
Rip currents are not rip tides. A specific type of current associated with tides may include both the ebb and flood tidal currents that are caused by egress and ingress of the tide through inlets and the mouths of estuaries, embayments, and harbors. These currents may cause drowning deaths, but these tidal currents or tidal jets are separate and distinct phenomena from rip currents. Recommended terms for these phenomena include ebb jet, flood jet, or tidal jet.[4]

A rip tide, or riptide, is a strong, offshore current that is caused by the tide pulling water through an inlet along a barrier beach, at a lagoon or inland marina where tide water flows steadily out to sea during ebb tide. It is a strong tidal flow of water within estuaries and other enclosed tidal areas. The riptides become the strongest where the flow is constricted. When there is a falling or ebbing tide, the outflow water is strongly flowing through an inlet toward the sea, especially once s... 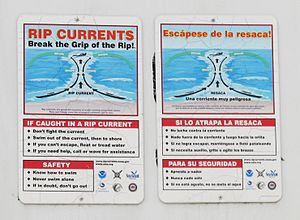 A rip current, often simply called a rip (or misleadingly a rip tide), is a specific kind of water current that can occur near beaches with breaking waves. A rip is a strong, localized, and narrow current of water which moves directly away from the shore, cutting through the lines of breaking waves like a river running out to sea. A rip current is strongest and fastest nearest the surface of the water. Rip currents can be hazardous to people in the water. Swimmers who are caught in a rip curre...

Florida Man is neither good nor evil, but pure chaos. I’d argue that using a questionable life saving technique to successfully save a life is on-brand.

Only virtue-signaling liberals flaunt the six foot rule. These people are flouting it.

Well at least they didnt use a human centipede…

Do people not know how to get out of a riptide? I.e. is this not common knowledge if you didn’t grow up next to the ocean?

Having grown up in a beach city, we all had that drilled into us since we were little. Now I live a couple of cities inland from the beach, but we still go, and GirlChild has had it drilled into her noggin (and she’s never been caught in one, but delights in showing us where they are).

Swim sideways. They’re basically formed by a channel in the sand underwater, meaning that water leaves there in more volume and more quickly, but the current itself is fairly narrow. I don’t know about other places, but “if you’re caught in a rip current, swim parallel to the beach until you get out” is posted on signs by beaches here.

“They’re dangerous because the chain can break if you have a weak link in it,” 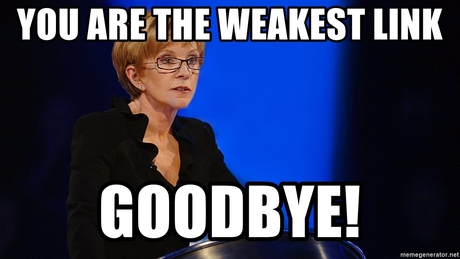 To follow up on @knoxblox and @tekk, this article from NOAA is very informative:

For the first time, NOAA is launching a national rip current forecast model, aimed at saving lives of beach-goers around the country. This new model can predict the hourly probability of rip currents along U.S. beaches up to six days out.

Basically, a rip current is very narrow and will not pull you under, so just relax and let it take you out a bit until the force stops, or swim sideways from it (parallel to the shore).

As in most things in life, the number one rule is: Don’t Panic.

“if you’re caught in a rip current, swim parallel to the beach until you get out”

If caught in a rip current, don’t fight it! Swim parallel to the shore and swim back to land at an angle.

Well at least they didnt use a human centipede…

Obviously the HC has value in society as I would expect their carbon footprint would be quite low re food consumption and waste, yet there is little to suggest that the individual links in the chain would have anything approaching the breathing capacity that is needed by your average healthy lifeguard!?

I’m thinking that the nose to butt crack situation would be a major impediment to oxygen intake, but then again all those extra arms and legs could be useful in cutting through the waves.

Sorry, so obvious to me that it didn’t occur to have to say it.

Your response answers my question though.

We used to use small rips to ride out, then get out, ride nice wave back in. Lather, rinse, repeat.

Ven you got it… 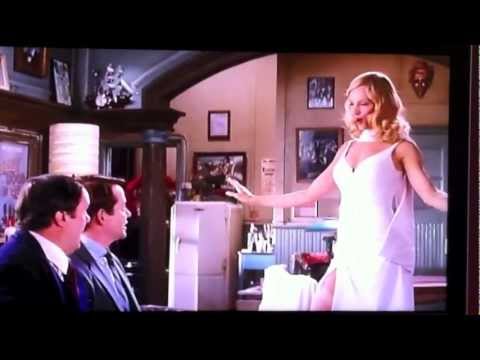