Watch Freddie Mercury's never-before-seen "Time Waits For No One"

Can someone explain the title “Time Waits For No One” but the lyrics are “Time waits for nobody”?

It’s not even my favourite song from that album. I often skip it.

Yet seeing him sing it is different. I’m not wanting to skip it at all. He’s a natural performer - even just to a camera. The little twitches, the arm movements, the way he moves his head - he wants to draw the crowd close, to keep them focused on him.

I wish I’d been able to see him live. He was easily one of the greatest stage performers ever.

The final line is “no one”. I suspect that Freddie just changed the lyrics when practising, and no one had time to change the title.

I was thinking the same thing, but he does say “no one” a few times throughout. Mostly it’s “nobody” though.

I enjoyed the song, but some of the video cuts were distracting. I get why they were done that way. It was just a bit odd.

The song’s video was recorded in a four-camera shoot in 1986, and the original 35mm film was put away.

Clark, 76, restored the negatives to add video for this version and brought in Moran to record a new piano track. 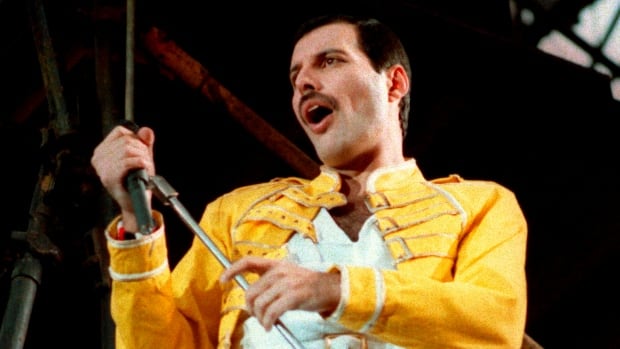 A stripped-back version of Freddie Mercury performing the song Time was released on Thursday, after a years-long search for the 1986 recording made at London's Abbey Road Studios.

Is this the new version of “big in Japan”?

I saw that title and thought of this Jackson 5 song:

They recorded it with “no one” one day, and re-recorded it the next day with “nobody”

Then they said “What a difference a day made!”

When they realized their mistake with the title, they said “Ain’t it a shame”

The final line is “no one”. I suspect that Freddie just changed the lyrics when practising, and no one had time to change the title.

It could have just been a flub in the studio but the take could have otherwise sounded so great that it just stuck.

I was hoping for a cover of the Stones song.

Who would attempt to top that solo at the end? I’m not even gonna look it up and find out. I’m not a fan of covers unless there’s a significant change that transforms it (sorry Carpenters, I prefer Luther’s version of “Superstar”).