I salute you, good sir. And congratulations on only crashing into one church, when you could easily have demolished several, and a Dollar General or three.

pulled into a private drive, abandoned the stolen tractor, fled on foot, turned, brandished a knife, was Tased by officers and arrested

Tased, not gunned down. Clearly, the perp was not black.

Aren’t these cops trained in the PIT maneuver? It seems to get a lot of use in other jurisdictions, if the news reports are to be believed.

30mph is a lot faster than I expected. I’d previously read of people fleeing police in heavy equipment that were traveling at speeds one could outrun on foot, but which persisted simply because of the danger/awkwardness of jumping on the equipment and getting the driver to stop.

Aren’t these cops trained in the PIT maneuver?

I’m guessing that and spikes aren’t exactly effective on a tractor… and they’re probably more likely to damage their cars trying it, too.

Aren’t these cops trained in the PIT maneuver?

Well sure, but the driver wasn’t a pregnant black woman, so they weren’t sure what to do. 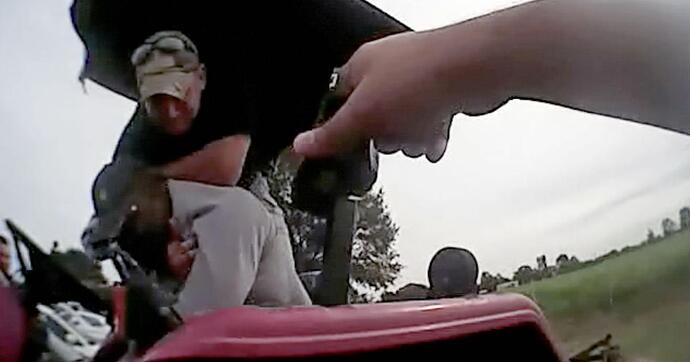 A criminal justice expert says Avoyelles Parish law officers who wrestled a Marksville man off a tractor while serving an arrest warrant last year used too much force, needlessly escalating

Maybe he didn’t understand what people mean when they talk about “jailbreaking” John Deere tractors?