Watch: Man records bear following him in a forest before using pepper spray

That’s why the surprise ambush would work so well

hum? well you may be on to something there but I got no idea

I carried a disposable fire extinguisher in my car for a few years, confident that one day it might save someone. Sure enough, I encountered a guy with a new Jetta parked on a quiet neighborhood street with his engine on fire. Confident that I was going to save the day, I parked, grabbed the extinguisher and ran to his car and pulled on the trigger … and it made a pathetic ‘pshhhh’ sound and nothing came out.

The guy’s car was fully engulfed in flames by the time the fire department got there. Point is, I’m not hiking in bear territory unless I’ve got backup cans of bear spray.

Did the spray even hit the bear

I’d guess the bear caught a whiff. Shortly after the bear turns and leaves, you can see it pause and give its head a shake.

And agreed with @awfulhorrid ; good to see an appropriate response, and not a full-on eyeball attack.

At 2:33 you can see a big cloud of spray pretty clearly waft onto the bear. I’m pretty sure the bear was reacting to the scent more than the sound. Luckily for the hiker, the wind was blowing in the right direction.

What a casual stalking

If bears could speak, this one might say “Stalking you? Oh heavens, no, I am just … just um … just climbing this tree because it might have some berries in it. Ah, no, no berries. Wrong sort of tree. Or wrong time of year. See this next tree? That’s just the same. Wrong sort, see? If you have been a bear as long as I have you get to tell these things…”

I think phones should just start recording horizontally regardless of how you hold them.

Did the spray even hit the bear

With bear spray, you’re not actually supposed to hit the bear (it would be very dangerous to let the bear approach to sprayable distance). Instead you’re supposed to create a large cloud of pepper spray between yourself and the bear while the bear is still a ways away from you. As a matter of general principle it is probably preferable if the bear is downwind from the cloud, not you.

I’m also told that you shouldn’t preemptively apply bear spray to yourself or your things, because bears apparently enjoy spicy food and the bear-spray aroma will make you a more enticing snack.

Probably all the bear was looking for was his pick-a-nick basket.

A couple of them were wandering through my neighborhood just two days ago: 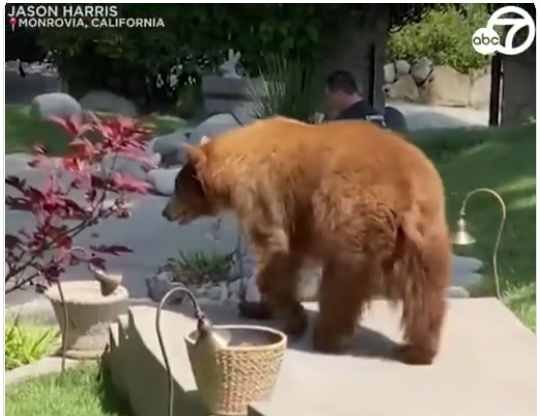 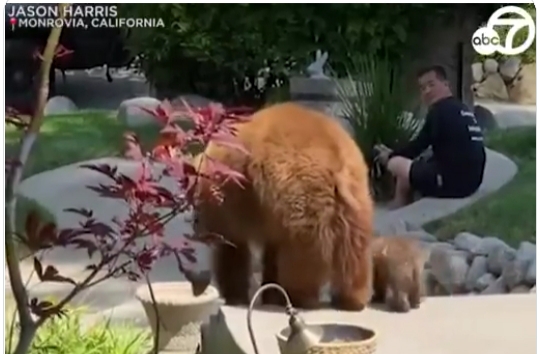 Look at the little mini-cinni!

(The dude who had his back turned at first was probably wise not to make any sudden moves once he finally saw the mama and cub.)

I’m also told that you shouldn’t preemptively apply bear spray to yourself or your things, because bears apparently enjoy spicy food and the bear-spray aroma will make you a more enticing snack.

Sarcasm aside, you also don’t want to do this because bear spray is extremely potent and you’d be choking yourself and everyone around you with even a tiny amount. There’s a reason why puncturing a can of bear spray at an Amazon warehouse led to a bunch of hospitalized workers.

That bear doesn’t look to be that old… Honestly, I think it was just curious and checking him out. If he had been a little more calm and stopped yelling at it he wouldn’t have had to spray it. The man was in his territory and he wanted to see what he was and what he was up to. People think they own the world. Animals were here a long time before us and we need to respect that if we invade on their territory it’s wrong of us to harm them for being protective. I mean, we are protective over our property and territory.