#Batwoman is coming Sundays this Fall to The CW.

No no. the dude bros will love it. They will fantasize about converting her.

/s for those that did not realize.

It’s not really an exact match, but the arpeggios in that first musical clip definitely remind me of the Stage 1 music from the Sunsoft Batman game for NES:

am i wrong to want the grrl power but without the explicit call outs to it? batwoman is cool enough. she doesn’t have anything to prove.

wait, did they change their minds about the long red hair since that teaser?

How many concurrent on-screen continuities does DC have that include Batman characters at this point? As far as I’ve been able to follow there’s the “DC Extended Universe” which includes the Justice League movies, the “Arrowverse” which includes some but not all of the recent live-action TV shows, a separate live-action TV universe for Titans and Doom Patrol, yet another live-action TV universe for Gotham, and some completely new continuity for the upcoming Joker movie. And that’s not counting whatever animated stuff they’re doing these days.

So is Batwoman actually inhabiting any of those continuities or is this yet another universe?

wait, did they change their minds about the long red hair since that teaser?

Exposing her distinctive long red hair would be a really stupid decision if she was trying to hide her identity, but incorporating a red wig into the cowl would actually be a pretty clever way of maintaining a disguise if she had short brown hair in real life.

I was gonna say the idea she has to adopt long hair to be acknowledged as a woman seems cheap, but I’ll buy your explanation.

Oh this is TV

I have to confess, haven’t gotten into any of the CW stuff. Not sure this is enough to make me change that habit.

I am so glad that last clip was played, because I was like, “WHY did they not go with the iconic red bat emblem and hair?” Looks like she was just wearing Bat’s old costume at first before making it her own. Now, will she use guns like she does in the cartoons and comics?

It looks good, hope it does well.

Looking forward to this!

To be fair, at least part of the problem is that it’s DC and DC doesn’t do subtle very often in many of it’s comics or shows.

They’re actually all a dream that Adam West Batman is having.

How many concurrent on-screen continuities does DC have that include Batman characters at this point?

Doesn’t much matter; they’ll just clean it up with a Crisis on Infinite Earths TV series later.

(Which Wikipedia informs me they are doing something with in Arrow, somehow? Huh? I never paid that close attention to comic books or to TV superhero shows, so IDK.)

They’re actually all a dream that Adam West Batman is having. 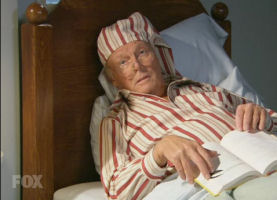 ooof. that cowl. not cool.

Doesn’t much matter; they’ll just clean it up with a Crisis on Infinite Earths TV series later.

Why does everything always need to be a “Crisis” in the DC universe? Can’t they ever just have a Casual Get-Together on Infinite Earths?

Looks awesome, also, we get the cool batwoman look (the one with the red wig).