Now I know what the inside of my brain looks like, and the cause of that annoying sound.

Hasn’t The Sharper Image been hawking these for decades?

A Stirling engine is a heat engine that operates by cyclic compression and expansion of air or other gas (the working fluid) at different temperatures, such that there is a net conversion of heat energy to mechanical work. More specifically, the Stirling engine is a closed-cycle regenerative heat engine with a permanently gaseous working fluid. Closed-cycle, in this context, means a thermodynamic system in which the working fluid is permanently contained within the system, and regenerative Origi...

Why is the video of a loud desk toy extra loud to begin with?

I love the aesthetic of those alcohol burner powered Stirling engines but dislike the noise and the fact that they require an open flame. I’d prefer a version that was slower and used a different heat source (maybe USB power and a heating coil).

At home i have a kit to build a Stirling engine, need to see where i stashed it. I had one previously but i accidentally dropped it :c I do highly recommend the ones you can get from here though:

I have the KS90 model in black

Edit: Also if i recall that same site was working on making a desktop USB heater for the KS90 models. Similar to those mug warmers people buy.

Double edit: wahey, they made one. I’ll need to get one for mine

Also the alcohol burner ones that Kontax offers are much nicer, they have a bunch of models but here’s one: 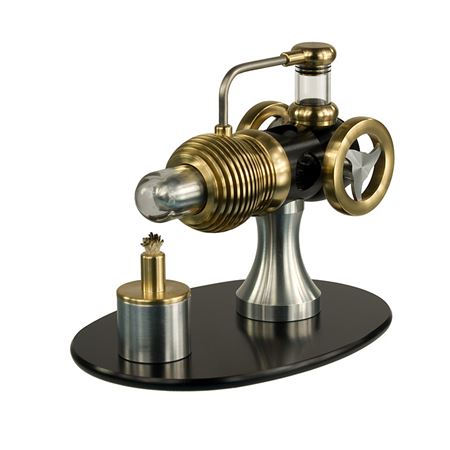 Now you just need to connect the output of the engine to a USB charger, which is then used to power the heater, and it can run forever!!!

Now I know what the inside of my brain looks like, and the cause of that annoying sound.

Be sure to replenish the alcohol from time to time.

Neat! I see why it started going so fast: the alcohol spilled up over the whole top of the lamp so the whole thing turned into a giant torch instead of a little burning wick. Hopefully that test tube is good boro glass.

I have this one:
http://www.grizzly.com/products/Horizontal-Stirling-Engine-Kit/H8101

It still pretty much looks like the picture. Every once and a while I finish one of the teeny brass parts.

Be sure to replenish the alcohol from time to time.

Lee Valley sells a low-temperature one that can be powered by the heat from a coffee cup or even sunshine.

It looks to be the same as the low-temp ones in the link you posted.

There are lots of how-to guides for LTD Stirling engines on the net.

I want one that I strap to the top of my head (heat source), and it runs a fan, for that Steampunk Propeller Beanie fashion statement.

The problem would be getting a good heat differential, and if its on your head the other problem would be your general movement and vibration from walking would throw off its efficiency significantly. Unless you used a high temp-high RPM stirling engine, but then you’d have to deal with an open flame or a very hot heating element. You’d be better off making a simulacrum of a stirling engine and use a small electric motor to drive the propeller.

The human head gives off quite a few watts of heat. If need be, a cold pack on the top plate would work. Only working while sitting down and holding it steady would be acceptable at an SF convention. It doesn’t really need to be efficient.