What would it be like if other NYT columnists took drugs and wrote about it?

So she consumed 16 doses of marijuana (?) and ended up lying on the couch having a bad evening. In her head.
I’m pretty sure that if I took 16 advil that I’d literally die.

You ever had a bad trip? Ever known anyone who had a bad trip? I recently had to talk a dear friend down from suicide after a smaller dose of legal Seattle chocolate than Maureen Dowd’s, because she couldn’t tell what was real and what wasn’t and was terrified that the whole world was nothing but a mad hallucination. I didn’t think it was all that fucking funny.

Are we really doing this now? Mocking people who have bad trips because of irresponsible labeling? Every remotely responsible drug user I’ve ever met knows that a seriously bad trip is nothing to laugh about. This “ha ha, look at the stupid druggie” routine is what I expect from strait-laced establishment types, and it’s really depressing to hear it coming from liberals just because someone disagrees with them.

Edibles are not the same as smoke. It’s really easy to get a horrifyingly bad trip if you don’t know what you’re doing–and most people don’t know what they’re doing, because first the government tried to keep them from learning, and now irresponsible manufacturers are glossing over the dangers to keep their sales up. I’m still in favor of legalization, and so is the friend I mentioned, but I’m favor of responsible legalization, responsible labeling and responsible manufacturing (to make sure the dose is spread evenly throughout the product)–which, BTW, is all that Maureen Dowd argued for.

By all means, do explain the joke, then.

Your choice. I await enlightenment.

Now that is trippy.

Well maybe that’s the real nugget here - educate yourself on what you’re doing before you go and do it (and even then, use caution). Something I’d apply to tripping out, drinking, rock climbing, skydiving, swimming and anything else more complicated than lying down in the dark and breathing through your mouth.

It’s too bad your friend decided to be somewhat reckless, but that’s squarely her responsibility, not the drugs or the person who sold them to her. Plenty of people responsibly get high and hold down jobs, have kids, become president, etc.

Dowd is a clown who showed just as much lack of common sense in deciding to recklessly, ignorantly engage in a fairly harmless substance enjoyed by millions of people. Her foolishness is not enough reason to put up endless hoops for buyers and sellers to jump through. As we’re seeing in areas where pot is slowly being legalized, the “for your own safety” legislation frequently ends up turning pot into being effectively unobtainable.

Your “Unregulated Marihuana causes suicide!” argument is exactly the kind of drug-war hysteria that got us to this point in prohibition.

It’s too bad your friend decided to be somewhat reckless, but that’s squarely her responsibility, not the drugs or the person who sold them to her.

She ate half a cookie. The seller had told her it was a fine starting dose. I don’t recall the alleged milligram count, but it was pretty reasonable. I’m not sure what was “reckless” about any of that.

…not enough reason to put up endless hoops for buyers and sellers to jump through.

Consistent manufacturing and accurate labeling is not “endless hoops.” It’s no more or less than what we expect of every other product in America. We’ve already seen that the labeling on THC edibles in Denver is wildly inaccurate. Most of them are bait-and-switch jobs with much less THC than advertised, but one had 50% more than advertised. That’s a recipe for a real bad time even if you do know your limits.

Plenty of people responsibly get high and hold down jobs, have kids, become president, etc.

I’m aware. I know quite a few of them. I’m not a prohibitionist at all; I thought I made that pretty clear.

I never said that. Must you put words in my mouth?

So she consumed 16 doses of marijuana (?) and ended up lying on the couch having a bad evening. In her head. I’m pretty sure that if I took 16 advil that I’d literally die.

Please note that Advil has a recommended dosage and an overdose warning clearly printed on the package.

There’s a NIR spectrometer wildly successful on Kickstarter, a Raman spectrometer project under construction on Hackaday, and many others out there. Is there a possibility to have some lab-in-a-pocket device, not specific only to marijuana but working with many substances, that would allow the users (and producers as well, I don’t believe they intentionally screw up the dosages) the needed quality control?

Let’s not confuse your friend with Dowd.

Dowd used a biologically active substance without heeding warnings and being careful about appropriate usage. (empty stomach, overdose, etc). There are a ton of resources out there for the inquisitive.

That’s a very different position than your friend, who didn’t seem to get quality info from her dealer. She didn’t have the benefit of a professional retailer who cautions and instructs you on use. She will not be a repeat customer. Drug prohibition kept her as uninformed as possible and forced her to use an inferior supplier.

Dowd did not have these handicaps.

Bad trips are not funny. Using a bad trip caused by your own willful ignorance to advance your career and agenda isn’t funny either.

Are we really doing this now? Mocking people who have bad trips because of irresponsible labeling?

No, we’re mocking people that are full of shit.

Read Maureen Dowd’s bullshit in her article where she begins with, “What could go wrong with a bite or two? Everything, as it turned out.”

She didn’t engage in a bite or two. She ignored the warnings of her guide and consumed more than she should have. People overdose on the drug alcohol and DIE every day. Where’s the overdose warnings on bottles of alcohol?

‘’…it is a reminder of how relatively safe marijuana is. Even when you consume way more than you should, the worst that normally happens is an unpleasant evening in bed. By comparison, if you consume way too much alcohol you die."

Dowd also went on in her piece to reference edibles and reefer madness murder in Colorado.

Maureen Dowd very conveniently omitted the fact that the Colorado murderer in question was abusing prescription drugs and his wife even said it on the 911 call just before she was murdered by him. Somehow idiots with an agenda keep leaving out that little tidbit.

Dowd is a laughable buffoon. If anyone needs to apologize, it’s her for spewing such misleading, half-baked, sensationalist, fear-mongering drivel to a national audience that’s still struggling for decriminalization amidst a destructive drug war. 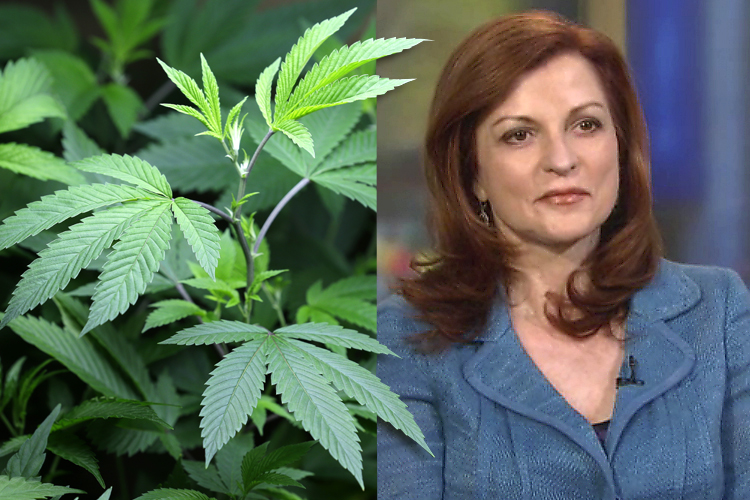 The New York Times columnist has way too much edible pot, has an intense high, writes a horribly misleading column

Edibles are not the same as smoke. It’s really easy to get a horrifyingly bad trip

Yes, especially after Colorado decriminalized it and people have ramped up their agenda against marijuana. Suddenly reefer madness abounds because people surely didn’t consume marijuana before the recreational laws were put into place here.

I have no idea how we all survived Starfest 2014 in CO which had profuse amounts of marijuana all over the place within the hotel the event was held.

It’s amazing that out of all the scores of people there no one had a psychotic break, committed suicide, murder, mayhem and other dire consequences of reefer madness. How did we all possibility survive all intact?

Have you considered that she is genetically predisposed to have some sort of mental illness that cannabis in edible form could exacerbate?

Should we label peanut butter to warn against peanut allergies for those rare people that are predisposed? I mean this as a serious question.

Do you think peanut butter should come with warnings?

HINT: People die every year from anaphylaxis. The only warnings I’ve seen is in products that may contain trace amounts of nuts that people with allergies wouldn’t perhaps expect to find the nuts in. We as a society don’t label for anything and everything unless fear-mongering and agendas are at play.

I’m for some of that as well (in reason) minus the irresponsible hyperventilating and overblown fearmongering that seems to go along with it from some of you. I’d also like to see multiple, comprehensive, independent, unbiased, scientific studies on edibles to find out what the risks are for the majority of people who are not genetically predisposed to have some sort of mental illness.

But, I have to ask you something. Why aren’t you and Maureen Dowd also up in arms about the vastly more dangerous drug alcohol? Where are those labels on that drug warning of the all the dangers of consuming it? You know, the very real dangers that affects nearly everyone who does?

So she consumed 16 doses of marijuana (?) and ended up lying on the couch having a bad evening. In her head. I’m pretty sure that if I took 16 advil that I’d literally die.

[quote=“PhasmaFelis, post:12, topic:33658, full:true”]Please note that Advil has a recommended dosage and an overdose warning clearly printed on the package.
[/quote]

Where’s your dire concern there?

@AcerPlatanoides bring up the good point below that Alcohol bottles do have warnings on them, but I think that’s a bit out of context since it doesn’t contain an overdose warning, etc.

What would it be like if other NYT columnists took drugs and wrote about it? boing

Hmmm… where’s that kind of warning on a vastly more dangerous drug called alcohol? en.wikipedia.org Alcoholic Beverage Labeling Act Right, but read the warning. It just says it impairs your driving, pregnant women shouldn’t drink it and it “may” cause some amorphous health problems. That’s it. That’s nowhere near the kind of shrill warning that people are suggesting for marijuana and that’s my point. Also, do note my context. I asked where’s the overdose warning on alcohol as peopl…

What I was getting at was that if you accidentally consumed that much advil, it’d be extremely dangerous. Consuming that much marijuana is dangerous, but far less so.

I live in Washington State, and we’d really like to see legal marijuana be successful here. Avoiding doing dumb stuff like making and packaging pot edibles that look like candy is probably going to need to be part of how it happens. Personally, it’s been a long, long time since I smoked pot, and I don’t think I’ve ever eaten it. A little customer education will go a long way toward making sure the industry succeeds and everyone is happy.

I’m also getting a little tired of two-wrongs-don’t-make-a-right arguments like the lack of warnings on alcohol packaging.

I think you might not realize that Maureen Dowd is widely considered to be full of shit. She’s known for exaggerating or just plain making things up to fit her preconceived notions. I find it entirely plausible that she took too much on purpose just to whine about it in print. Or alternatively, that she didn’t.

You win this round, Dowd.