UPDATE 5/29: The scandal has been revealed as sexual abuse of a minor. May this horrible man face justice for his crimes and may his victim(s) find the peace they deserve.

Breaking news: Former House Speaker Dennis Hastert was just indicted on charges of lying to Federal officials over $3.5 million he paid to an undisclosed party as hush money to cover up “past misconduct.”

While the juicy details are almost certain to come out soon, I thought this might be a fun time to lay down (figurative) money on What’s Denny Hiding?

Anyone want to lay down their bets? The usual suspects would be:

Note: I’d put this in the form of a survey but I’m not sure how to make one.

I tend to not agree with this sort of conduct, but I really wish that those who did such things had some pride and strength of their convictions. The furtiveness and wishy-washy apologies are just dreadful.

I really wish that those who did such things had some pride and strength of their convictions.

It’s a little early to talk about “convictions”—they haven’t even set a trial date yet.

all of the above?

I know this probably wasn’t your intent, but your category organization seems to imply that molesting kids that one was coaching would not be considered a “True Crime,” and is in a different category from Sexual violence / rape.

You’re right, that’s infelicitous. I noticed that last night, then I found out you can only edit polls in the first 5 mins.

I tried to scrap the post, but it doesn’t seem to be deleting. I’ll ask a mod to correct.

Edit: Note: mod informed me they can’t change polls, despite the error message.

The former Speaker of the House is accused of then lying to the FBI when asked about unusual cash withdrawals from several banks.

Ed2: I guess Jeff got it to delete after all.

I thought we’d already had a thread on this…from a year ago. Sounds like his case is coming to a close. 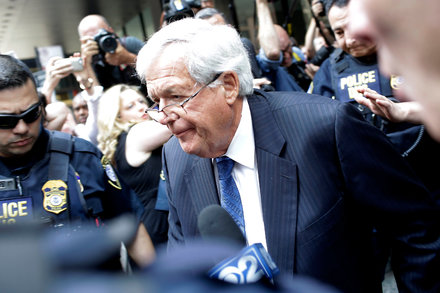 In a court filing, prosecutors said they believed the former speaker of the House should face up to six months in prison when he is sentenced on April 27.

This topic was automatically closed after 631 days. New replies are no longer allowed.