Going to be passing through soon. What’s good and mutant in Nashville Knoxville Memphis?

You should go to Chattanooga if you have time and go to Rock City: 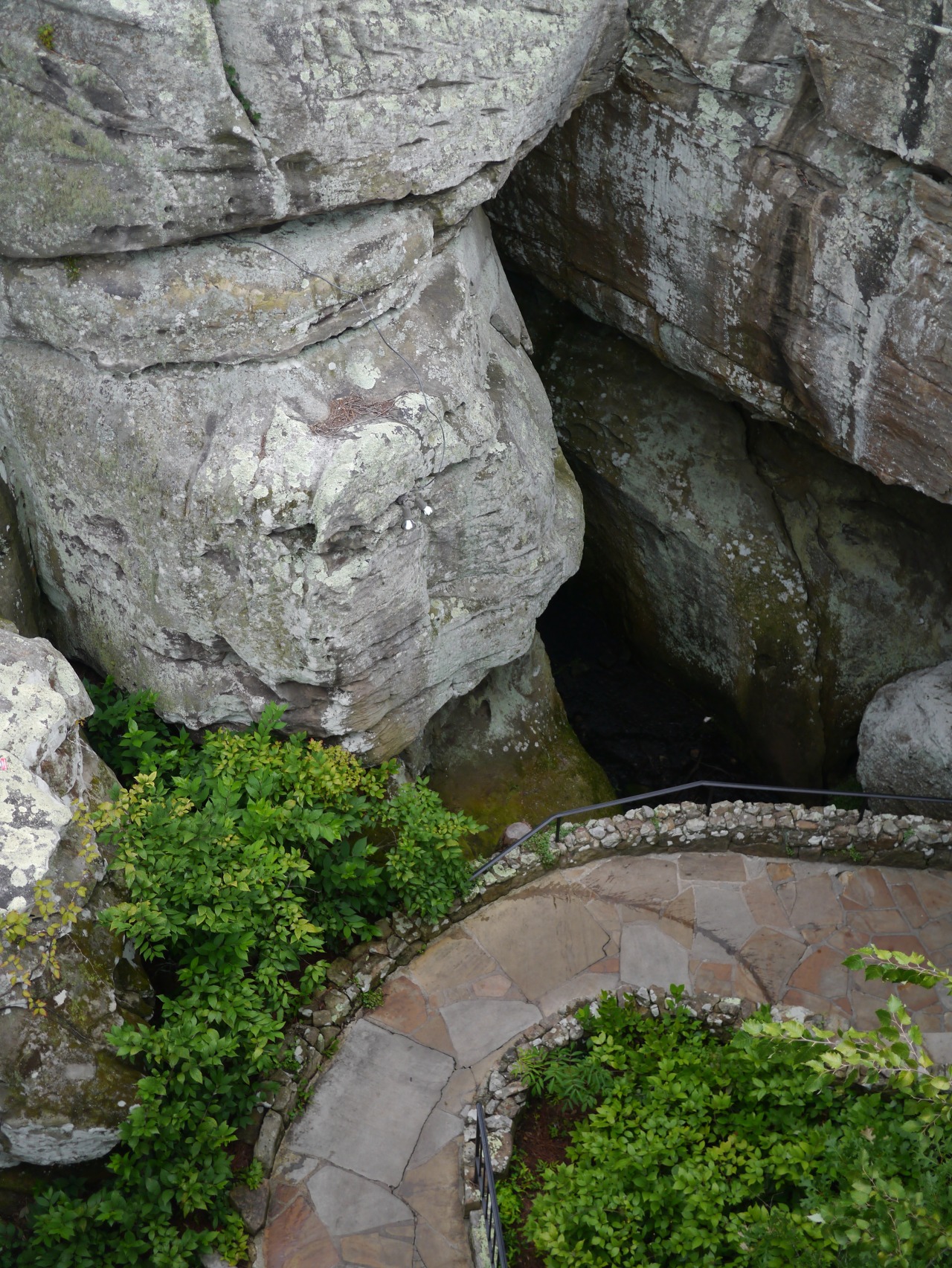 It’s just over the state line in GA, but right outside of Chattanooga… plus they have a good aquarium, if you like that sort of thing.

Not far from Knoxville is Pigeon Forge and the nearby Gatlinburg. They’re known as the tourism centers of Tennessee and arguably the southern US. Gatlinburg is relatively classy, with the nearby Dollywood theme park, a few haunted houses, and typical tourist museums like Ripley’s, and the Great Smoky Mountains Park is next door. Pigeon Forge is a touristy mecca with boat rides, indoor skydiving, go-cart racing, and hillbilly themed attractions and restaurants. I once went to a “Hatfield & McCoy Dinner Feud” show there that was bizarre and insane.

Not saying that any of the latter is good and/or mutant, but it’s like nothing else anywhere in the country, that’s for sure.

This is the tone I’m talking about…

What’s good and mutant in Nashville

How much time have you got? There’s the Parthenon which is an interesting historic replica with a small art museum in its basement. There’s Yazoo Brewing Company, which you can tour. It’s a short tour but they give you free samples and a commemorative snifter. There’s the Adventure Science Center which is fun even if you’re not a kid and has a great planetarium. There’s the Country Music Hall of Fame. Even if you’re not a country music fan it’s interesting and has rotating exhibits and worth checking out for its new building.

While you’re here get some Prince’s Hot Chicken if you can.

If you’re coming through this weekend there’s the Tomato Art Fest.

If you want something outdoorsy take a walk around Radnor Lake–the only preserved natural area in the middle of a major metropolitan city in the world, according to the rangers, anyway. It was originally a water source for the railroad and private hunting ground for the wealthy and turned into a state park by a major public campaign in the early 1970’s.

There’s the Cheekwood Botanical Garden or the Nashville Zoo.

Walk through Riverfront Park and you can stop in Fort Nashborough.

If you were here in October I’d recommend a visit to Performance Studios which always has an amazing display of Halloween stuff and has fun costume wear and accessories any time.

Dammit, why isn’t the tourism office paying me for this? Anyway if any of the above pique your fancy I can probably also come up with additional related recommendations.

While you’re here get some Prince’s Hot Chicken if you can.

Yeah, Prince’s is for purists, but I will also put in a mention for Hattie B’s–but only the Charlotte location because it’s just steps away from Bobby’s Dairy Dip, and just a couple of blocks away from The Great Escape comic book/music/whole lotta other stuff store.

That’s where I sold my childhood Star Wars collection.

ETA: Mentioning the Charlotte area reminded me of Rhino Books which has a huge selection and the guy at the counter can talk to you about anything ever published. Maybe. There’s a front room stuffed with pulp science fiction.

I’m stopping now but if I’ve mentioned just one thing of interest then my work here is done.

the one time I passed through PF we did this. it was a total blast! the classroom session lasts longer than the actual wind-silo time, unfortunately.

I’m fairly certain that over the course of my life I’ve spent more money under that roof than anywhere else, and I haven’t been there in probably ten years. All my comics and most of my tapes as a young teen, and then I started collecting LPs. still got a ton of stuff with their price tags on it.

WTF? they moved to Charlotte? I used to live on 42nd! There used to be a Dairy Dip on 46th and Murphy but that changed to Bro’s while I still lived there. I don’t even recognize Nashville anymore.

Also rented a spot a block from the Belcourt Twin one summer although I’d been going for years prior to living that close. Awesome film memories.

I haven’t lived in Knoxville for over a decade but the general hang-out area was the Old City. Nearby is Market Square, if you’re hungry the Tomato Head is the spot. Also nearby is the Tennessee Theatre, an original Art Nouveau movie-house that is worth seeing in that a real authentic movie theater with all the original fixtures is such a unicorn nowadays. but who knows what if anything will actually be playing when you’re there.

We expect you to post some pics of your excursions while you’re driving through TN!

I am ashamed to say that even though I live in Nashville, I don’t know a lot of what to see around here (outside of the big things like Grand Old Opry, Adventure Science Center, etc.)

Well, if you insist.

There’s the Tennessee Central Railway Museum, although its main feature are the train excursions and the next one of those isn’t until September.

If you like Indian food and the show Chopped then you’ve gotta try Chauhan’s Ale & Masala House, co-owned by Maneet Chauhan who’s a regular judge, and the food is just amazing.

A quick fun thing is to pop into the Hermitage Hotel downtown and go to the men’s bathroom downstairs. They’ve preserved its art deco style.

The Frist Museum doesn’t have a permanent art collection but does have rotating exhibits.

Yeah, I’m starting to run out here. There’s also the historic Exit/In. Here’s a funny story about that place: an older friend of mine was walking near it one night and met a large group of people being led down the street by a guy in a solid white suit. The guy was a young comedian named Steve Martin.

And here’s a fun ad for the Schermerhorn Symphony Center:

I’m fairly certain that over the course of my life I’ve spent more money under that roof than anywhere else, and I haven’t been there in probably ten years.

Yeah, the old Great Escape down on Division Street closed a few years ago. The location on Charlotte is much bigger but I have such fond memories of the old one. They tore it down and put a pizza place there.

Remember the infamous Mario’s Italian Restaurant? Infamous because they tried to pass off pork as veal. Eight years ago it burned down.

If you get down to Chattanooga, there’s the Tennessee Valley Railroad Museum. They do regular steam excursion operations on a local track segment about three miles long with a Y at one end and a turntable at the other. 4501 is recently refurbished and looking good for her age (over 100). The route goes through a tunnel in Missionary Ridge (well known to Civil War historians) and over several bridges and creeks, with nice greenery. The trains don’t go all that fast; the track isn’t great and while 4501 can do a lot more than they’re asking of her, they’re worried about 630 shaking apart if they go too fast. The ride is like a couple hours long, and you might be able to do other things the same day if they’re in the vicinity. I was there for the debut of 4501. Highly recommended, if you’re into that kind of retro-mutant tech. They let you get up close and personal and you can walk all over the tracks, there were no access controls at all.

EDIT - from looking at their web site, it kind of implies the short local trips are pulled by diesel, while the steam is used for weekend excursions off the property. ??? It doesn’t say explicitly, but if so, that would be a change since I was there in 2014.

(I didn’t know about TCRM that @SpunkyTWS mentioned . That just got added to my list.)

If you’re passing through Knoxville and have an interest in the Manhattan Project, make a stop in Oak Ridge which is about 40 minutes away.

The American Museum of Science Energy (AMSE) is pretty cool, and you can also arrange tours of Oak Ridge National Laboratory through their visitor center (note that this needs to be coordinated in advance; the AMSE also does daily bus tours of ORNL).

Some interesting history there.

If you don’t have an interest in these things, Oak Ridge pretty much sucks otherwise.

My family hails from Nashville. All of the trips I’ve made have been either with my family, and/or visiting family – I think I’ve hit a bar perhaps twice in all of the dozens of trips that I’ve made there. I have, however, been well-fed there.

I don’t get back that often these days (e.g. no grandparents to visit anymore), but one of my absolute favorites is pulled pork barbecue, almost always from Whitt’s, but possibly Bar-B-Cutie (both are chains with stores throughout town). Burr’s was great, but they’re a bit out of the city (there’s one in Mt. Juliet, and one in Lebanon). I was well into adulthood before I learned that pulled pork is generally associated with the Carolinas; I’d figured it was something unique to Tennessee if not Nashville. Although I grew up in Texas, where the brisket is abundant, the first barbecue that I enjoyed was pulled pork.

Also a ways out of town, in Smyrna, is Omni Hut. I liked the food but the main reason for visiting is its (now) old tiki theme.

I greatly enjoyed Ellendale’s (in Donelson; just north of the airport) last couple of times I was there. I also liked Noshville (@noahdjango helped me remember the name of it in another thread, but evidently the Broadway location has closed).

I can’t personally vouch, because I haven’t been yet, but my parents rave about a place called Swett’s. A friend of ours eats there every day.

I’ve read that the largest Kurdish population outside of West Asia resides in Nashville. I’m guessing that there are some excellent kebob places there, but I haven’t tried one.

That’s what they keep telling me…

I was supposed to go to Nashville this summer but we ended up cancelling.

You gotta see the duck parade at The Peabody when you go to Memphis. I think it’s twice daily? Yes, at 11 a.m. and 5 p.m.