The miniatures in “Rise Sun” are top notch; particularly the various monsters, which are so large that “miniature” doesn’t really do them justice.

The artwork and tone of “Dungeon Degenerates” look really fun, and that Gasland’s accessory looks fantastic.

While Osprey Games is kind of spamming skirmish games at the moment, it does a couple of cool things. One, you get a nicely produced, full colour book for you game. Two, you get games that aren’t tied to a specific miniature manufacturer; so that the desire to push miniature sales doesn’t bend and break the rules. Now, some companies are good at making sure that their game remains playable after the release of the latest wave of minis; but other have been guilty of making new releases over powered and then nerfing them after they’ve sold enough units.

Mantic Games’ “Hellboy” board game kickstarter is up and running at the moment. It is looking pretty darn cool; another co-op dungeon crawler, but with a Hellboy skin.

If you post the entire, long and highly detailed blog post, covering many subjects, on the main blog page, instead of the traditional and proven ‘intro/summary/teaser, encouragement to click through’ format, then I will never have to click through and see all the wonderful adverts the clicked-to post-dedicated page might afford the opportunity for BB’s publishers to display.

(Oh, and it is painful to scroll forever in blog view, not knowing when this post will ever end and we’ll finally get to the previous/next one, and even more so when one has limited interest in the topic and half the images don’t load properly on the main page anything but randomly, leaving one scrolling through acres of white space and needing to click through to see them, anyway.)

if D&D had been co-designed by Gwar

Two things I liked in the 80s that are still going strong in 2018. Feels weird.

Damn, it’s amazing the production values and the quality of minis that come with board games, now. Back when I was buying more board games, everything was made out of cardboard, with only those games with broad appeal having even poor quality figures, and the art was often rudimentary. Of course, they were cheaper then, so when I inevitably played it once - if at all - I didn’t feel so bad about how much I spent on the game. These days I try to scratch the board game itch by trying to find the rules for games online and reading them, as that pretty well simulates my past game-buying experiences.

My mouth is watering looking at all these awesome games. I’m lucky enough to live near a great gaming shop, Drexoll Games. Don’t let their crappy website get in the way of things. If you live in the Vancouver, BC area, be sure to stop by on Friday evenings when they open their doors to local board gamers to play any game in stock for free (not sure if I should be advertising this, since I think they only want people with good intentions to come, but I think BB is a pretty safe crowd for that).

I sat that because I only buy my games at that shop in order to support them. And I hope that some of these tabletop games will be available there.

Those B&B figures would be perfect for a Redwall setting session or using the Mouse Guard tabletop game.

You noticed that as well?

It’s an idea that keeps coming back.

Old school cover! That was the edition I bought back in the day. And likely still have.

Good coverage of the advances in contemporary board-gaming and production qualities.

Every game is going to have some reiteration of previous advances, but each will have a different flavor for particular players.

There was some controversy over “Rising Sun” after it was discovered that one of the game characters was pulled from a fake Wikipedia entry.

Adapted from my Twitter thread. In March of 2017: CMON Games launched Rising Sun on Kickstarter – an area control game designed by Eric Lang. It was a huge success – bringing in over 4.2 million do…

Hi, all. As I checked the Monsters, I wonder where "Kōtahi" comes from. I'm actually a Japanese but never heard of it. Does it come from another Asian country, or is it an original monster made by CMON? On the page "List of legendary creatures...

There have been a plethora of racing games lately. If that’s your thing, then check out the bicycle racing game “Flamme Rouge”: 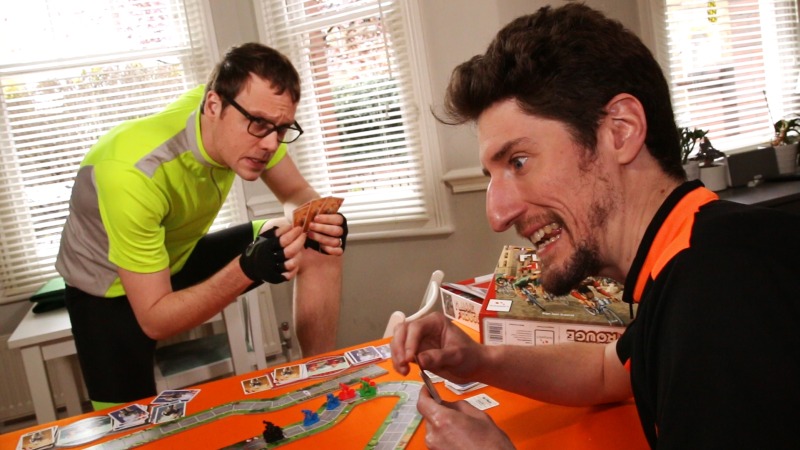 Who among us can claim that they didn’t once dream of growing up to be a master of bicycles? Those debonair doctors of velocity. The zeal on wheels. I have good news, friends. It turns out that in the…

The excitement in the air is electric as the leaders round the last corner and head for the finish line. Each team has used cunning and skill to position their sprinter for this moment, but only one has done enough to pull off the win! Will your...

I’ve also seen the recent reissue of “Down Force” played, and it looks like a good game, so not sure why it was out-of-print until recently:

High-stakes bidding on million-dollar race cars. Frantic bets placed in secret even as the cars race around the track. And to the victor, the biggest purse of all. But in the world of motor racing, the margin between victory and defeat can be a...

I’ve just started a campaign of Stuffed Fables with friends; I love the combined book/playfield design and have been really enjoying it so far. It has the storytelling I loved from Mice & Mystics without feeling as punishing.

The bf just picked up Star Wars Legion, and I think we were all secretly hoping to hate it, because after investing in X-Wing, Armada, and Imperial Assault, another new format isn’t in the budget… but unfortunately it’s a ton of fun, so terrain, environments, and playfields are being built and designed as I speak.

I thought the only other editions was the GRUPs one

A later FGU edition had a new cover, I believe by Jeff Dee.

Yeah, I am SO tempted to get stuck in to Legion (I too already have a pretty big investment in X-Wing and have the Imperial Assault basic set). But I have WAY too many games unbuilt, unpainted, unplayed and more KS-backed games on the way. There is just too much impressive stuff coming out these days!

Once you start down the path of tabletop miniatures battles you are doomed.

Once you start down the path of tabletop miniatures battles you are doomed.

Thus my hesitation to get into Ogre Miniatures even though theres some cool stuff happening on that front lately.

Oh, the miniatures are so cool! And I haven’t painted mine yet, but they look really fun to paint. I just got an airbrush. Can’t wait to paint them with that.

Your current solution misses out on the all important, “Where the fudge am I going to store all of this stuff” aspect of board gaming.