When store clerk calls little boy the N-word, the child's father hits back with powerful lecture

Bet old homer went home wearing a new clean pair of undies after he had that introduction to reality delivered to him. He just plain showed his ugly ass at the wrong time.

The racist in question probably didn’t realize that the child’s father was within earshot.

Kudos on the dad for calmly and quietly schooling the bigot, though the words probably fell on deaf ears and a hard heart.

Me personally, in that exact situation, though… especially now?

The racist in question probably didn’t realize that the child’s father was within earshot.

It’s hard to hear with how low the volume is, but homer literally said that to the father early in the video, that he didn’t realize the father was nearby.

Can we not with the latent homophobia/transphobia?

It’s hard to hear with how low the volume is

Yeah, my hearing isn’t what it used to be either; I did miss that.

That being said, what a shitty thing to admit to; being in pain or not realizing that the parent was around doesn’t make calling a Black person a racist slur in any way ‘okay.’

That being said, what a shitty thing to admit to

Yeah I didn’t even hear an apology in there at any point, just excuses.

Cleaned up the sound in the video so its clearer, the video doesn’t play but the sound does:

So the headline that he called the son the n-word is incorrect. The father’s own words state his son overheard homer using the word directed at the father. Using the word in reference to any person, any age is disgusting. The idea that he might have been targeting a little kid adds in a different layer of abuse. An adult assaulting a child is cowardice of a different flavor. Homer is a creep for having used the slur period. That fact that he was ignorant enough to use the word so that the little guy heard says a lot about homer, none of it good. The headline feels like click bait though. It implies an even deeper level of abuse. Given the fathers well stated, calm measured response really was the takeaway for me. It dug right into the heart of the issue, an immature slur delivered in a cowardly manner. Then the educational part of saying you don’t know what the other person is going through. Clearly informing anyone that it might be very wise to realize you might be the final trigger to set off a reaction of great consequence. Homer was very fortunate. He received two pieces of potentially lifesaving advice, one about racism and two the warning that anyone could be ready to go violently go off.
Will he recognize the gift he got or will he be all butt hurt for getting called out?

So the headline that he called the son the n-word is incorrect.

I understand the need for clarity as far as getting the facts right, but the reality is that it doesn’t actually matter whether it was the father or the son who was called that racist slur.

That the bigoted former employee felt comfortable enough to say it aloud to anyone while he was at work is the issue here.

The layers you allude to aren’t very relevant in the overall bigger picture, because it’s the systemic racism and White supremacy at hand which is the real problem.

The former employee’s casual use of the word even while working in a professional capacity is highly indicative of a huge societal ill that has never even been properly addressed, let alone resolved.

I agree with you that the systematic racism is the key issue regardless of who the target was. My frustration was more about the way it felt like clickbait. This country, hell, this world, has so many kinds of inequalities it’s nearly impossible to know where to focus any kind of weighed blame. And they are all so entangled it’s nearly pointless to assign weight to one horror over another. That said, I personally see child abuse as a very special kind of evil. Women and children are the low hanging fruit for those who like to hurt other people. The damage done to a child has a lifetime to manifest the harm done. For that reason I personally see that layer more vividly whether the damage done was racially motivated, sexual abuse, physical abuse, psychological trauma or combinations. I see child abuse as one of the root causes for many twisted adult behaviors. A damaged kid may feel a need to be superior to someone, racism or other hate based behaviors are easy targets when institutional racism is part of a society’s foundation.
So for me, when I see a headline that says a kid was the target of racism/of abuse it has a double whammy effect for me. And in this case, because the headline wasn’t accurate, I responded to the error.

Your points are well taken.

My frustration was more about the way it felt like clickbait.

Doesn’t almost everything these days, though?

Homer no longer has a job at that company. 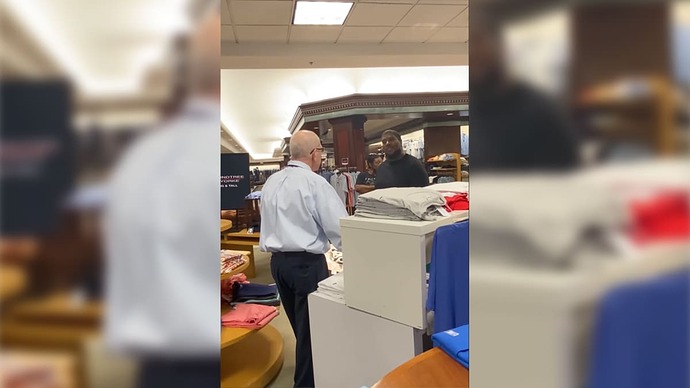 In a viral video, the father tells the store worker he’d disrespected him and his family in the most eloquent way possible.

The clickbait crap, everybody trying to make a buck off of bullshit, it’s damning to society because it causes us to suspect everything and become jaded. We can’t afford to be jaded now when we need to be more engaged than ever before. I read your stuff about being a Mom, I’m dad to 7 boys I adopted and more that I raised for a while. Damned if a kid can’t read me and move his little ass into my heart and soul. What a joy to have some kid lay claim to you, hand their self to you and know they’ll be safe. God spare the SOB that fucks with them, it brings out something feral in me. Take care of you and yours.

God spare the SOB that fucks with them, it brings out something feral in me. Take care of you and yours.

I hear you; I guess I’m just mildly relieved that it actually wasn’t the kid that the hatred was directed at. (Not that there wasn’t still damage done from his witnessing it.)

Thanks for your kind words, and right back at ya.

The world is topsy~turvy right now, and the crazy-ass ‘bumpy ride’ ain’t over yet…