Where is my damned jetpack?

You can’t take off from ground level with one of these things so technically they don’t enable “flying” so much as “falling with style” but still pretty damn cool:

reminds me of Dan Wilson’s lovely book on the guide to science fiction that never happened. More an indictment of society than sci-fi. 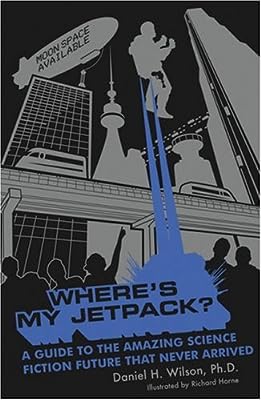 Where's My Jetpack?: A Guide to the Amazing Science Fiction Future that Never Arrived

It's the twenty-first century and let's be honest-things are a little disappointing. Despite every World's Fair prediction, every futuristic ride at Disneyland, and the advertisements on the last page ...

Technically, it was a Bell Systems Rocket Belt. but yeah, James Bond had one, and every kid my age wanted one.
http://rocketbelts.americanrocketman.com/jet-pack.html

What happened to the world of the future, as the worlds fair promised us?

If we (as society) spent as much on scientific research as we do the next hollywood blockbuster? We could probably make a lot of this happen.

We have the jetpacks…still waiting on the heat-proof pants and boots.

I love the fact that the helmet sports a picture of Wile Coyote on with a rocket.

Can we even fathom the cojones it tool to strap that contraption to your back and take to the sky?
Holy hell.
I mean, it’s a miracle the thing could lift him with stones that size.

How about a slightly used wingsuit?

What happened to the world of the future, as the worlds fair promised us?

We didn’t get all those fancy automated kitchens to make life easier for housewives, but we did get women entering the workforce and running for elected office.

We didn’t get hover-cars, but we did get a dramatic decrease in automobile-related deaths due to new safety technologies.

So I guess you could call it a wash.

There is one in a Bell museum collection here. . . .

We didn’t get all those fancy automated kitchens to make life easier for housewives, but we did get women entering the workforce and running for elected office.

—But we did get frozen foods, microwaves, dishwashers, and before that clothes washers and dryers…I’d bet that together they are some of the things that increased the frequency of two income families…

I was thinking more along the lines of robot arms that prepare everything and do the dishes a-la The Jetsons, but that is a fair point. Maybe it would feel more like the retro-future we were promised if every microwave was labeled “ATOMIC COOKING RAY.”

Yours isn’t? I have a label-maker if you want to borrow it.

I remember once seeing an article about a small flying platform that had reportedly been tested for the military. It had a platform about 1 meter in diameter that housed a fuel tank and an upright console that held an engine from a cruise missile topped by handlebars. The article said that it was very stable and the rider displayed no tendency to fall off.
Wonder what happened to it?

There’s also one of these on display in the Bond in Motion exhibit at the London Film Museum.

WOW! I looked it up, and there’s an entry in Wikipedia under Williams X-Jet.
Still looks pretty good to me!

The late Tim Wilson put your feelings into a song https://www.youtube.com/watch?v=ikb8CtEK1qQ