Both of my Reps voted for this bill, Nadler and Rangel. I am EXTREMELY disappointed that Nancy Pelosi voted against it. But then I am not too surprised, she is not a real Progressive and is as corrupt a demagogue as they come.

Isn’t govtrack.us and opensecrets.org great websites. Use them!

There is a need for institution building. The EFF is great but we need to scale up and grow teeth.

YAY fatalism!
let’s not bother doing ANYTHING to challenge power.

My rep, the ancient and venerable Dingle, voted ‘aye’. Bless his retiring heart. At least he doesn’t have to live through the looming nightmare ahead of this country. He’s over 80 and pretty frail.

and yet, it’s the truth.

I’ve been looking through and around the list and can’t find what the italics indicate.
Anyone know?

I’ve about given up on Pelosi on any privacy issues. She’s totally against her constituents having any privacy rights at all.
I just someone would run against her who wasn’t totally abhorrent on abortion, LGBT, and other social issues.

Italics are Democrats. Non-italics are Republicans.

Called my rep, Eddie Bernice Johnson. She, or at least the person I spoke to, said she voted “no” out of respect for Obama.

I asked that next time she vote, she respect her constituents instead, since that’s what she, you know, is paid to do. “But you have to respect President Obama!” I could see I was getting nowhere.

Nancy “Impeachment is off the table!” Pelosi is a member in good standing of the Uniparty, and a loyal servant of the oligarchy. Her vote against the Constitution yesterday was no surprise.

I sympathize with your dilemma regarding candidates who support social issues,
but with respect, these issues are red herrings that are cynically used to divide people against each other
while the United States continues its transition from a Constitutional Republic to a feudal serf economy police state.

That’s not to say that social issues are not of huge importance. Quite the contrary.
But these issues are used cynically by the oligarchy to manipulate the electorate and maintain the
illusion that the Democratic and Republican parties represent two distinct political philosophies
that present American voters with a choice at the voting booth.

Rather than voting for a Republican, (the other wing of the uniparty), consider voting
third party, or at least supporting primary challenges against Representatives and Senators like
Pelosi, Feinstein, and Boxer.

None of these people, much less their Republican doubles, are concerned with the
will and well being of their constituents, simply because at the end of the day they don’t
work for us.

They, like the Trojan horse faux Democrat in the Oval Office, work for the 1%.

While she’s not part of the Progressive Caucus, she definitely puts on her progressive hat when it’s time to send out fundraising emails. She’s a hypocrite above all else.

you KNOW the’re a problem when more REPUBLICANS outvote to keep the democrats program in place.

AND when more democrats vote to take a democrats presidents agenda down than back him up ?

this just proves hes more like bush than maybe MCaine woulda been ?
he’s certainly following in a shitload of his footsteps.

was this program implemented DURING the bush era or obamas ?
either fucked up.

and this means snowdens MORE of threat. poor bastard/hero. all for NOTHING.

Rather than voting for a Republican, (the other wing of the uniparty), consider voting
third party,

Which on a national level is just like voting in Republicans. We haven’t consistently voted in enough lesser evil over time to be in a position for a third party to take hold, so why throw away your vote?

At least with Democrats there’s a small crack in the door down the road for third parties. Meanwhile, Republicans do everything in their power to nail that door shut.

We are still reeling from two GW Bush terms and his mostly rubberstamp Congress which further entrenched corporatist claws deeper than ever into nearly every aspect of our republic including the mainstream media, military and more.

You’ve got to undue more of the greater evil Republican damage before any real progress is made. The best thing to do is to keep voting in the lesser evil and keep doing it for decades. Two terms of a corporatist appeasing asshole like Obama obviously isn’t going to cut it. 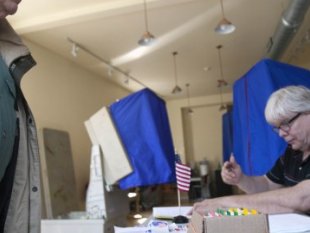 Some of the party's tactics can be reversed. Many of them can't

You’re ironically shooting yourself in the foot and making a third party much less and less likely the more you usher in more Republicans by throwing away your vote. Becoming a representative Democracy is going to take decades of voting in lesser evils. Down the road, IF we keep doing that, then there’s a practical hope of voting in a third party. We’re not there yet, not by a long shot. Too much very real damage has already been done by allowing greater evil. Not even ONCE, much less TWO terms of GW Bush? C’mon…

this just proves [Obama is] more like bush than maybe MCaine woulda been ?

Arizona Senator and former GOP Presidential candidate John McCain said Sunday the threat of terrorism in the United States “is getting worse,” and this validates the government’s controversial monitoring of all telephone calls and emails placed in...

Can we please stop with the false equivalencies or worse?

Let’s make it possible to criticize Obama and other Democrats (as they rightly deserve) without delving into the fantasy that McPain/Palin or Romney/Ryan would have been remotely better. Republican just LOVE it when you do that, by the way…

Romney’s only complaint would be that we should further privatize the NSA, etc. so it can make more money for corporations people.

Italics are Democrats. Non-italics are Republicans.

It should be duly noted (going by percentages) that if more Democrats were in office, the good would have prevailed in this close vote.

Sometimes voting in lesser evil brings just that to our republic. Please stop throwing away votes and start looking at the bigger picture when you vote.