Who hates who around the world? Take Roy Wood Jr.'s geography lesson to find out

Originally published at: Who hates who around the world? Take Roy Wood Jr.'s geography lesson to find out | Boing Boing

I have a perfect answer to this. I’ll give it to you guys soon.

This was great from start (giving the well-known and eternally simmering hate-pot known as the Balkans only a cursory mention*) to end.

On a domestic U.S. level, plenty of pointless hate to go around as well.

What about the Quebecois?

Ahahaha. such uncomfortable laughter. I loved this song as a kid.

In the early days of the web, probably in '94, I found a page using HTML’s < table > that had matrices with rows and columns indexed by countries or states, the entry indicating what Xians think of Yians. There were several, though I only really remember the one for Western Europe. What was most interesting were the constant columns or rows. For example, Swiss thought of most everyone else as “thieves”. Whereas most everyone thought of Belgians as “pederasts”. (I wonder now what the Swiss thought of the Belgians.) This being before the Wayback Machine, I don’t know if the page has survived.

I totally misread the title as ‘Who Hates Around The World,’ and for a split second thought they meant the Daft Punk song:

That said, Roy’s break-down was funny and informative; it gets hard to keep up with who’s hating on who, these days.

During an extended ‘sabbatical’ in Europe folks were always trying to figure out from whence i came. spoke English, but with no accent (like none. dull as dishwater!) also didn’t wear Bermuda shorts or a hat, spoke softly, so: wasn’t an American… “ah! must be Canadian” In the final analysis it amounted to: “So ok he is a yank. but he’s from a funny/marginal part of the states (Seattle) so he’s essentially a Canadian”. i accepted this; but still don’t like poutine.

The word your looking for is “Agreed”

For the record: Hate is over rated, Love is best.

Its pretty simple. The correlation between “hates you” and you currently having, or recently having had, your army in that country, or having your army pretty publicly planning to visit that country, is pretty strong. Germans actually didn’t like Canadians much for a good while. But when the Canadian army was finally withdrawn from Germany (much to the US’s displeasure at the time), it only took about a decade for the Germans not to hate Canadians any more.

Since the US has pretty much been steadily adding to the number of countries its military is in or visiting, and never decreasing that number, well the outcome is predictable. You can manifest destiny, arsenal of democracy, leader of the free world all you want, but as long as your army is in another country, its a pretty good bet that country won’t like you. 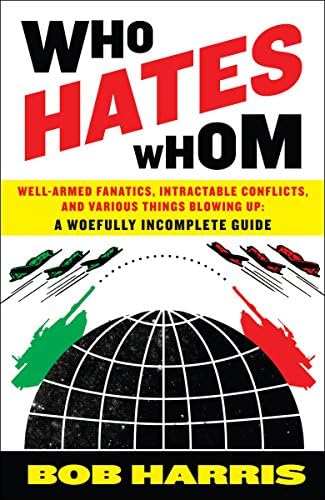 Who Hates Whom: Well-Armed Fanatics, Intractable Conflicts, and Various Things Blowing Up A Woefully Incomplete Guide