Why Are White Men Stockpiling Guns? 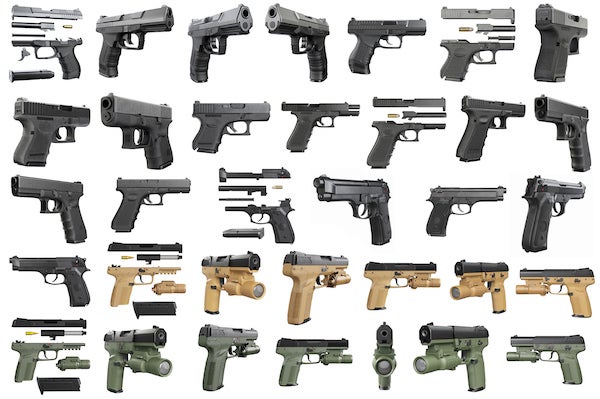 Why Are White Men Stockpiling Guns?

Research suggests it's largely because they're anxious about their ability to protect their families, insecure about their place in the job market and beset by racial fears

Major findings of the research:

About ten million people (3%) of the US’s population owns half of the guns. The profile of these men is as follows:

These are men who are anxious about their ability to protect their families, insecure about their place in the job market, and beset by racial fears. They tend to be less educated. For the most part, they don’t appear to be religious—and, suggests one study, faith seems to reduce their attachment to guns. In fact, stockpiling guns seems to be a symptom of a much deeper crisis in meaning and purpose in their lives. Taken together, these studies describe a population that is struggling to find a new story—one in which they are once again the heroes.

In short, poorly educated white male racists who feel like their lives are out of control are buying metal security-blankets to compensate for feeling lack of power and control in their lives.

However, that power and control never materializes, and the gun is massively more likely to be used on themselves or their family than anyone else.

Sometimes, when you think you’re being badass, it turns out that everyone else just feels sorry for you.

About ten million people (3%) of the US’s population owns half of the guns.

I find two things rather puzzling.

One is how they came to the (implicit in their behavior and often explicit) belief that guns would be of assistance in solving their problems. Too much childhood exposure to John Wayne?

The other is why such a concentration of firepower and grievance seems to see such limited use; much of it suicide or homicide within one’s immediate social circle. The naive expectation would be that 10 million people with plenty of guns and intense anxiety about losing what little they have would make things like being linked to offshoring, layoffs, insurance company fuckery, etc. tantamount to a death sentence.

In practice, not so much. Very occasionally someone kills an immediate supervisor and/or a few colleagues; but that’s about it. Do they just not do target research?

One is how they came to the (implicit in their behavior and often explicit) belief that guns would be of assistance in solving their problems. Too much childhood exposure to John Wayne?

That, and they’re anticipating a future where guns play a much larger role. Traditionally working class skills don’t earn you much status in today’s economy, but should things break down it will be the Chris Kyle fans calling the shots, and they know it.

Again, just look at what they’re driving. Pickups used to be happy little farm vehicles. Now they look like they’re ready to go to war.

That’s why I ask “Do they just not do target research?” Yes, the guy handing out the pink slips is often just one rung up the ladder from you and just the messenger; which I assume is why killings of immediate supervisors aren’t terribly common; but the identities of C-level executives, board members, and the like are typically public knowledge for entities that aren’t deliberately opaque shell entities(between SEC filings, if public; and LinkedIn you can learn a lot, other media sources provide further information) and those people are definitely not of the same social group; and ‘a social group that you’d like to join’ in only the most fantasy-heavy aspirations.

None of that is to say that shooting them would reverse trends in globalization post WWII or the mid-70sish decoupling of wages from productivity; but if you think that your problem has a gun-based solution(which seems likely since you are stockpiling them) focusing on hitting as far up the food chain as you can seems like the least illogical thing to try.

Again, just look at what they’re driving. Pickups used to be happy little farm vehicles. Now they look like they’re ready to go to war.

No disagreement about the trends in automotive styling(also available for the McMansion class in SUVs; as quoth Jello Biafra “Need my armored luxury tank to drive to work, drive home”); though ironically pickups actually ready to go to war are mostly ones so small and feature-light that they aren’t even sold in the US; and mostly operated by people who would…not exactly…be greeted as comrades by the people discussed here: “Technicals” are reputed to punch well above their weight and cost; but mostly among people we either dislike or are trying to use as proxies against people we dislike even more.

I suspect that the guy below would look at current US pickups designed to look ‘tough’ with roughly the same contempt reserved for H3-driving humvee fanboys.

A plea for cultural understanding. But also a plea for human sacrifice, and lots of it!

A white man I know is currently, quietly, stockpiling guns, as in, getting his hands on a bunch of AR-15s and such and locking them away.

Me: So why are you buying guns all of a sudden?
Him: To protect my family.
Me: From what?
Him: Well, you never know.

Who is going to protect his family from him?

The empty-headed plastic doll is way smarter, though.