Why did people look older earlier in the past?

Originally published at: Why did people look older earlier in the past? | Boing Boing

22min video is too long but I’d say a big factor was smoking.
Chain smoking was more common in the past and even if you didn’t smoke most public places and work places were full of smoke.

Similar thing with 19th- and early 20th century-era pix. The beards don’t help, but those folks look like they had a rough life.

[Also, that guy’s delivery was like nails on a chalkboard for me. Ouch.]

22min video is too long

I got to 4mins 10 secs in and figured everything else was going to dive deeper into what I’d heard so far
a) yes people are healthier for all sorts of reasons and this is reflected in how they look (in general)
b) it’s also a question of personal perspective - older people look older but when you are that age you remember how much older they looked to you back then which biases your thinking.

[Also, that guy’s delivery was like nails on a chalkboard for me. Ouch.]

22min video is too long but I’d say a big factor was smoking.

My sister and I are a pretty perfect AB test of those factors. She is three years older, but looks 10-15 years older (don’t tell her I said that). The differences are that she tanned aggressively most of her life and smoked until she quit in her 30s. I’ve never smoked and was an indoor human my entire life. The difference shows dramatically between us.

Based on this one anecdote, sun exposure appears to be a huge factor. I’ve never had a tan in my life (I just burn, so I go nowhere without SPF 100) and my sister loves the sun. Bakes in it every chance she gets.

It’s not the years, it’s the miles.

A culture that encourages and celebrates immaturity and a permanent state of adolescence? Because marketing consumer culture works better on impulsive children, so adults that behave like children are more favorable and profitable to said consumerist capitalists? This cultural shift happened in earnest in the 70s, and it seems there is no going back.

Everyone’s got it here. It was a rougher life for in general for the vast majority of people i
before 1945 in a way people who don’t study history would find hard to understand. It was hard on a typical person’s body just existing before the postwar economic anomaly (and it may be again in the coming years).

Things got better with the rise of a prosperous middle class. However, the continuation of smoking, crap diets, lack of a widespread exercise culture, and non-use of sunscreen for people who spend a lot of time outdoors pushed what we perceive as that prematurely aged look into the 1980s.

The illusion aspect is caused by seeing young people in old photos wearing the fashions and hair and makeup styles we associate with our parents and grandparents.

Paywalled, but you can see the picture without paying: NEJM case study of a 69-year-old truck driver with severe chronic sun damage to just one side of his face, which was more exposed to sun as he drove his truck over a long career. Presents a very good case for the role of sun in skin aging. 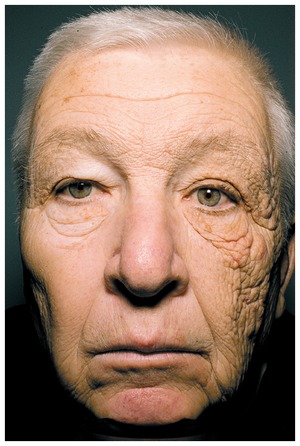 People have gotten way smarter about skin cancer risk and the dangers of sun exposure nowadays. Nobody even talked about sunscreen back then, and you couldn’t even buy anything better than SPF 10.

You beat me to it. The only thing I will add is: regulations. We (generally) have stronger pollution, food, work, and drug regulations now than when our parents and grandparents were young, and so aren’t suffering the effects of contaminants and poisons as much.

And they also sold actual magnifiers in the form of mirrored reflector screens you’d hold while lying out in the sun. My friends and I still laugh with horror about our parents doing that in the 1970s.

The only thing I will add is: regulations.

Good point. We should also note that this discussion is another one focused on the U.S. and Western Europe. Go elsewhere in the world and you still see a lot of “highly weathered” folks in their 40s and 30s.

A culture that encourages and celebrates immaturity and a permanent state of adolescence?

That’s probably a minor issue. The appearance of youth has been glorified since antiquity. Modern marketing culture promotes it as well, but since the 1990s it’s also pushed responsibility for one’s health and fitness and lifestyle to stay looking that way. “Indulge yourself like a child” isn’t the desirable advertising message it used to be.

Wow, that is the most compelling case against tanning I’ve ever seen.
You know if the doctor says, “can I take a photo for my records?” that it is not good.

And then there are those of us who just have, as a friend once said of me, “a youthful mien,” even compared to people my own age. This is not the blessing one might think: being respected and taken seriously in business and social situations when one has the aspect of a kid is a constant problem. I’m now past the threshold of middle age, yet my contemporaries, if they don’t know my actual age, will often address me as “young man.”

I don’t want decrepitude, but Man, it’d be great if I could pass as my own age.

It’s not just about appearances though. Our culture is steeped in celebrating adults behaving like kids. That was not acceptable forty+ years ago.

Looking at old photos of my parents from the 70s, they look very youthful despite having been cig smokers at the time. Health and nutrition aren’t necessarily factors that have improved with time either — there are far more obese people today than forty years ago, and much more junk food consumed, despite all the aspirational health and fitness subcultures you mention.

Hoo-boy, our friends’ grandma was an aggressive tanner and heavy smoker. She was practically a walking leather pair of boots.
Now that I think about it, another of our family friends was like that. He quit smoking and was doing very well at fighting the urges early on, but cancer still got him about 15 years later.

Now you know how women get treated in every situation everywhere.

Coupla fun facts for those of us deep into middle age: When All in the Family premiered, Archie and Edith were supposed to be about 45, and when Barney Miller premiered Abe Vigoda was 54. Drink water and get your sleep, folks!

And don’t forget eye damage. Not as visible as skin, but sun damage to eyes is bad. I bet that truck driver had significant loss in his left eye