“Windowless bunker”: Reviews are in for Disney’s $5,000 Star Wars hotel

Thank you for bringing that up. I saw a lot of hot takes complaining how “clean” everything looked for Star Wars, but… this is meant to be a luxury ship? Meaning it’ll be polished & gleaming?

It will be much more authentic in 2042 when the walls have yellowed, the crevices have filled with grime, half of the interactive features are broken from thousands of kid hands, and the cast has gotten surly from years of abuse by entitled tourists.

I’m kind of confused by the kind of person that would complain about the “immersive experience” of a starship being windowless. Like, do they think a panoramic view of the Osceola Parkway would improve the experience? The room supposedly have large screens, synced together, showing space scenes appropriate for what’s going on at the moment. That’s more appropriate than the view of some palm trees and a retention pond with a freeway in the background.

My guess is that they don’t want windows overlooking a parking lot full of Hertz rentals, but the real problem is a combination of a flat panel in a tiny room simply sucked.

I was wondering if leaving the immersive star wars galaxy and getting back into your rented ford focus would be kind of a let down, but now I’m wondering if there will be relief when going outside again. There is no outdoor promenade, no port adventure, no outdoor rooftop bar… hopefully the smoking section isn’t a concrete slab surrounded by chain link fencing.

After all the investment Disney sunk into this attraction, I don’t understand why they didn’t include a collimated display in each room to simulate a space scene out of a porthole. If I can make one with a cheap computer monitor and a large fresnel lens, it doesn’t make any sense that the Imagineers couldn’t figure out a way to cheaply reproduce the effect for minimal extra cost. It would’ve gone a LONG way towards increasing the sense of immersion when in one’s “berth,” and removed the bunker vibe.

ETA: got to that point in the video, and yep, they’ve done it, obviating my comment.

I don’t understand why they didn’t include a collimated display in each room to simulate a space scene out of a porthole.

Isn’t that exactly what this thing is? 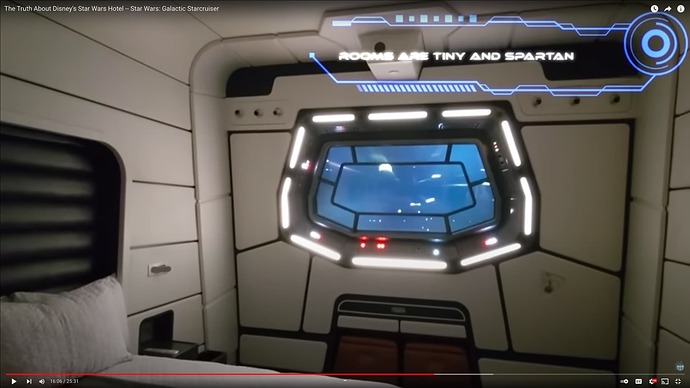 Ah! Maybe. I missed that.

There is no outdoor promenade, no port adventure, no outdoor rooftop bar…

There is a “climate simulator” however.

Especially if they could dock somewhere. like you arrive at your flight at 3pm, then are in Bespin from 5-10pm followed by an overnight flight home.

This is a great idea and got me thinking…
Is the hotel a 48 hour dinner theater… hotel? Or do the guests leave in the morning to go spend money in Disney world, then come back to “the ship” for dinner and a show? Maybe Disney world is the port?

What they oughta do is have a holo-deck (Yes, I know. Wrong franchise.) and when you enter it you are back on Earth, exiting the hotel.

Is the hotel a 48 hour dinner theater… hotel? Or do the guests leave in the morning to go spend money in Disney world, then come back to “the ship” for dinner and a show? Maybe Disney world is the port?

You arrive in the afternoon, do stuff onboard the “ship,” have dinner, etc then most of the next day is a port excursion down to “Batuu” (via a spaceship that looks suspiciously like a box truck on the outside) where you get to wait in shorter lines for the rides in the Galaxy’s Edge portion of the park and presumably spend time in the rest of the park too if you want to. Then you go back to the hotel/starcruiser for the rest of the evening and go home after breakfast the next day.

There is a “climate simulator” however.

when you enter it you are back on Earth, exiting the hotel.

As P. T. Barnum famously put on a sign, “This way to the Egress!”

My biggest problem with this BESIDES being the cost of a used vehicle?

NONE OF YOU PEOPLE exist in my Star Wars Universe. The SECOND I see other NPC civilians in my Star Wars Experience, it’s…not STAR WARS. It’s a synthetic media amoeba designed to absorb the MOST CASH possible from those willing to step across a particular threshold.

I’m sure it’s built well. Disney is definitely masterful at THAT… AND co-opting stories to extract the most cash possible from willing symbiotes.

Their liability insurer rejected the idea - too many arm injuries to winning players.

I guess super-angry, disappointed guests later on in the “ship’s” restaurant (a future review may prompt me to put quotes around restaurant) won’t get to see the frightened and embarrassed looks on the faces of the fully masked stewards. Guests may see the drip-drip of tears issuing from the Tusken Raiders, though… like leaky pipes.

IIRC, the minimum booking is 2 nights. Because reasons.

Heck, the maximum may also be 2 nights. Because reasons.

I lived in Kissimmee, once upon a time. It has its moments, but generally scenic it is not.