Woman at DMV started shooting because line was too slow, police say

You must assume that any suspicious moves mean they’re reaching for a weapon, so shoot first

That logic only works if you’re a cop. I don’t argue for gun control either, but I observe that the people who argue against it are having trouble making a very good case lately.

her thought process at that moment: 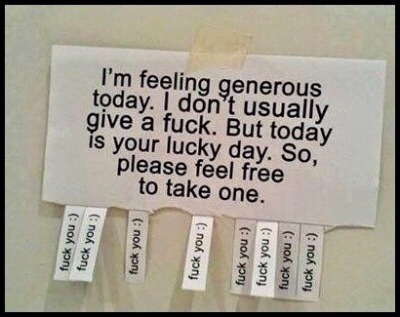 That logic only works if you’re a cop.

Most firearm homicides in US involve family or friends, known people, not strangers. If Sis or Buddy make a move, gun them down before they can aim. Otherwise, you’ve had it. That’s the logic of concealed carry.

An armed society is a polite society" only works if everyone is actually armed. In America hardly anyone is armed except Police, Militias, Hunters, Gun collectors and criminals. Heck even our Military only carry firearms at need depending on their jobs.

An armed society is a polite society" only works if everyone is actually armed.

But is it actually true in the first place?

There is never enough Winston Rowntree comics out here in internet land (I mean other than on his site and on cracked)… he does lovely work.

An armed society is a dangerous society.

I am still curious as to where the bullets came down at, and what they hit.

I guess it is easier to get a gun than a driver’s license.

Also, only if everyone is presisposed to being polite.

A quick scan through US frontier history shows just how not, f’reals…

It is impossible in America.

Except for every time it’s been tried. The 1994 assault weapons ban, as weak sauce as it was, reduced mass shootings while it was in effect (then they increased immediately when it lapsed). The Brady Bill, again, as incredibly limited as it was, and as unenforced (less than 10% of violations go to prosecution!), it still significantly reduced firearm suicides.

An armed society is a dangerous society.

An armed society is a scared society. And scared, armed people are dangerous.

Except for every time it’s been tried.

The horse is out of the barn in America. Too many weapons exist, and are now too easily made. 3D printing can evade production bans. Only massive door-to-door searches can enforce possession bans. Sure, Tramp twice tweeted, “Confiscate guns now; due process later.” IOW fuck the law. But I seriously doubt it’ll happen.

No. The firearms industry does NOT get to win, just because they fucked Americans over so thoroughly that people give up.

We have the data to prioritize who represents the greatest risk and the means to start chipping away at it. As you’re demonstrating, we just lack the will to do even the bare minimum.

You know, I was actually unfamiliar with the artist. But I remembered seeing that comic strip from TVtropes.org in an entry about time travel. (Beware that site is addictive!)

I will definitely check out more of his work. Thanks for giving me the artist’s name.

Beware, the subnormality comics can be very long and have weird scrolly things happening… and lots of long rants, too. And a sphinx.

If we all agree to it, and it benefits the people, then we should keep it. But clearly there isn’t broad support for it. And arguably a lot of lives were lost unnecessarily in hanging onto the old Amendment.

The Constitution is a living document, and we’re supposed to update it to meet changes in the world and in society. But the conservative mind resists the very idea that the world changes. They resist that values set forth before they were born could be altered. In practice, it’ll be a very difficult uphill battle to strike the Second Amendment. I sincerely doubt it will occur in my life-time, even if there is a mass shooting every day (oops! we’re already seeing that on average).

If we all agree to it, and it benefits the people, then we should keep it. But clearly there isn’t broad support for it. And arguably a lot of lives were lost unnecessarily in hanging onto the old Amendment.

The 2nd’s intent was to allow any (male) citizen to serve in the nation’s defense, regardless of creed - unlike Britain, with non-Anglicans excluded. A true implementation of the 2nd will require all citizens with firearms to enroll in a well-regulated militia, and to only carry firearms in public when called to defend the nation. Nobody is armed near schools or hospitals. Non-citizens stay unarmed. Violation is a capital offense.

Now we see a radical reinterpretation for Personal Armament pushed by fascist turds. But they go wimpy when non-whites are armed. Reagan signed a strong gun-control measure after Black Panthers with shotguns sat on California’s capitol steps.

Alas, possession of firearms by non-whites seems to justify extra-judicial executions. What a pickle.