I applaud the spirit of your attempt, but I think the more baseline issue is: what the fuck kinda bullshit law is this?!

As a result of the searches, prosecutors are charging her with offending religious feelings.

I feel like fake Christians would hurt Jesus’ feelings (if he existed) everyday, but none of these religious laws ever seem to go after hypocrisy, only free-thinking blasphemy.

It’s the flag of the Italian Peace movement and the Perrugia-Assisi peache march that is endorsed by the Franciscans and the Italian catholich church (like from Pope Francis https://agensir.it/italia/2018/10/06/dallinvito-del-papa-dite-che-il-mondo-e-in-guerra-alla-marcia-perugia-assisi-del-7-ottobre/) - The peace flag used is actually a simplified version of the peace flag made by.James William van Kirk, a Methodist minister from Youngstown.

I suppose that for some people peace and religion aren’t compatible.

The thing about these “offending religious feelings” laws is that one person’s religion is an offense to someone else’s “religious feelings.” It’s entirely about maintaining the power of the dominant religion, which is the only one that ends up benefiting from the laws.

The so-called Christian right in the US have been using this argument for as long as they’ve been waging their culture war. The people they single out for “offending Christians” are usually other (actual) Christians. They’re trying to lay claim to all of Christianity and push out every other church. I can only imagine what they’d get up to in the US if they had such laws to help them, though they’ve done a pretty good job of both codifying their own beliefs as the default “Christianity” and into US law as it is.

Interestingly, I hopped on over to the Breitbart comments on this story to see what the chatter was.

Their take seems to be:

There is no bottom to that well, and nothing that crawls from it is good.

The whole foundation is rotten.

"These twelve dubious concepts promote conflict, cruelty, suffering and death rather than love and peace:

From Valerie Tarico, Religion’s Dirty Dozen - 12 Really Bad Religious Ideas That Have Made the World Worse

I’ve never actually seen this codified so comprehensively.
Pretty sure its missing a few. So, to add to this list:

You should dig up “Sister Wendy” and her PBS history of art shows.
She actually had a very good bit about the “Piss Christ”

I love this. Bill Moyers is trying his hardest to get Sister Wendy to be outraged. And she won’t take the bait. “C’mon. You’re a nun. This is the Piss Christ. What d’ya think?” I love Sister Wendy.

Take a look at her take on Rothko and Warhol. Her take is spot on to me about what makes a great artist.

Who presumes to decide for Jesus what his sexual preference is.
I am sure the one Jesus loved would not be amused, either.

Hmm, maybe they should stop and think a bit about what happened the last time politics in that area started to get all right wing, ultra nationalist, and anti-semetic. Didn’t work out so well for them (or anyone really…)

Wałęsa is a devout Roman Catholic. He is a staunch opponent of abortion; in 1993 during his presidency he signed a law restricting abortions in Poland. This law reversed the virtually free access to abortion that existed since 1956 and limited its use to cases in which the woman’s life is in danger, pregnancy has resulted from rape or incest, or the fetus is irreparably damaged

Wałęsa is well known for his anti-gay position. In 2013 he said on Polish television that homosexual people have no right to a prominent role in politics, “They have to know that they are a minority and must adjust to smaller things”. He also said homosexual MPs should sit “behind a wall” in a parliament. Despite sharp international criticism and a legal complaint of “propaganda of hate against a sexual minority”, Wałęsa refused to apologize for his comments. At a political rally in 2000, he described gay people as “sick” and said, “I believe those people need medical treatment” 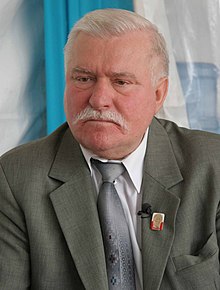 Wałęsa is a devout Roman Catholic. He is a staunch opponent of abortion; in 1993 during his presidency he signed a law restricting abortions in Poland. This law reversed the virtually free access to abortion that existed since 1956 and limited its use to cases in which the woman's life is in danger, pregnancy has resulted from rape or incest, or the fetus is irreparably damaged. Doctors who violate the rules now face up to two years in prison. This abortion law is one of the In 2011, Wałęsa rej...

the leftists are calling this out as unfair, but they never seem to poke fun of Muslims like they do Christians.

She should go to jail for blasphemy and desecration.

Possibility of a prison sentence for “defacing” an icon depicting Madonna and Child. I don’t know who this would satisfy: An iconoclast or its opposite.

https://www.huffpost.com/entry/pope-francis-heresy-letter_n_59c9898de4b06ddf45fa9209
Some of these conservatives are accusing the Pope of heresy, because it doesn’t fit with their vision of the world, and find strange that the pope endorses Christian values and don’t understand why friars and nuns are helping poor black refugees. It’s called charity and proselytism, and is a fundamental part of the Christian religion.