Since this is Saudi Arabia, I can only assume that this woman has been apprehended on suspicion of witchcraft and sorcery, and will be summarily executed at dawn.

I have to ask. Which is it?

We have the other post and thread from The Freq about how Hollywood demonizes all muslims/arabs/brown people by casting them in movies as terrorists and feeds into the idea they are all bad people.

Then we have this which as far as I can tell pokes fun at them negatively because the advertisement is altered to reflect their cultural views (woman in bathing suit removed, man and kids all covered up more predominantly, not sure what other alterations were made).

If they aren’t all terrorists (which we can agree not all muslims are terrorists)…and they have every right to their own cultural appropriations. Then why is it wrong to alter the ad for their home country? Do we view the same acts by China when they remove zombies or ghosts from movies with the same derision?

I feel like BB just burned both ends of the candle here.

Well, one thing is that Boing Boing is made up of individuals who post whatever interests them without consulting the other writers. Also, there’s a difference between casting a group of people as being pro-terrorist and pointing out systemic misogyny.

The “no topless bathing suits” on the men and kids is consistent, but why reverse the name of the pool company?

The photoshopping was at least good enough to hide the arms well. Putting clothing on children is half as difficult.

While they’re at it, can they do something to protect this kid from his mom’s new boyfriend, sexy young smoldering satan? 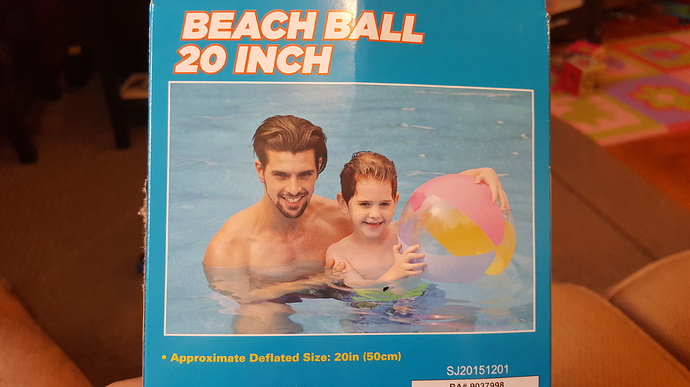 *From the box for the beachball I bought my daughter at RiteAid last summer…This one’s been burning a hole in my “pictures for bbs” folder for far too long…thanks Saudi Arabia!

Well, to the first point, I understand that and its not that I expect there can’t be some overlap.
To the second point, is removing the woman from an advertisement misogyny? The arab world certainly practices misogyny on numerous levels there is no argument there. But not having a woman in the ad is contempt for women? What if they had left her in but covered her in a burkha?

If you think replacing a woman with a beach ball is not a good example of misogyny, then we’ll have to respectfully agree to disagree.

I prefer to think it wasn’t misogyny. The photo started out with no woman and everyone clothed. Some marketing hack removed their clothes and added the woman to try and sell more pools. He messed up when he flipped the logo. Rookie mistake.

I didn’t state my opinion either way, did I?

I asked you if you feel they had left her in the pool and covered her with more Photoshop clothing than they did the man and kids, would that have been more acceptable to you? What would have been an acceptable compromise in your view to Muslim views on women displaying their body in public vs marginalizing women in the Muslim community?

I’m not sure what you’re trying to accomplish. This post, I think, shows a great narrative on the portrayal of families in the US vs Saudi Arabia. I’m going to bet the removal of the woman is actually about them bathing together or something to that effect.

Why does the post have to go beyond that, or be connected to every other post? Not everything is a Very Big Deal™.

Better to be a beach ball than to have to swim in a long-sleeved shirt.

It seems that women are not allowed to swim in public:

"Women are not allowed to use public swimming pools available to men and can only swim in private ones or female-only gyms and spas. Reuters editor Arlene Getz describes her experience of trying to use the gym and pool at an upmarket Riyadh hotel: “As a woman, I wasn’t even allowed to look at them (‘there are men in swimsuits there,’ a hotel staffer told me with horror) - let alone use them.”

Driving ban lifted, but activists have now set their sights on a new target - the end of male guardianship

Yep, thought as much. Explains the picture all the more, then.

The lengths that the decadent, hedonistic and short-sighted House of Saud goes to placate their country’s religious nuts seems silly until you consider that the alternative is the heads of all those coke-snorting and escort-banging princes on pikes in the complex surrounding the Kaaba. And as disgusting and oppressive as state-sanctioned misogyny like this is, it’s still nowhere near as destructive as the House of Saud funding terrorism toward the same end.

I feel like BB just burned both ends of the candle here.

If you’re looking to be Disappointed in BoingBoing for some perceived hypocrisy, this is a bit of a stretch – especially since this particular cultural appropriation is not merely silly (e.g. the removal of ghosts from a fantasy film) but also actively harmful.

The motivation behind it is misogyny. Misogyny is bad regardless of its cultural heritage.

Moreover, it’s important to stress that this is the product of a relatively recent regression to more fundamentalist views. Look at photographs of the Muslim world during the 1970’s. What we are seeing now is the product of religious fundamentalism running out of control, a very unfortunate problem that the United States helped create in the interest of interfering with the spread of socialism.

Do we view the same acts by China when they remove zombies or ghosts from movies with the same derision?

They write right to left in Saudi Arabia, duh.

It seems that women are not allowed to swim in public:

They should just use vintage 1920 photos when they had those big, all covering suits.

ETA - reminds me of the time the Queen drove the Saudi King around the grounds.