Says the boss: “Be creative, but make it safe.” 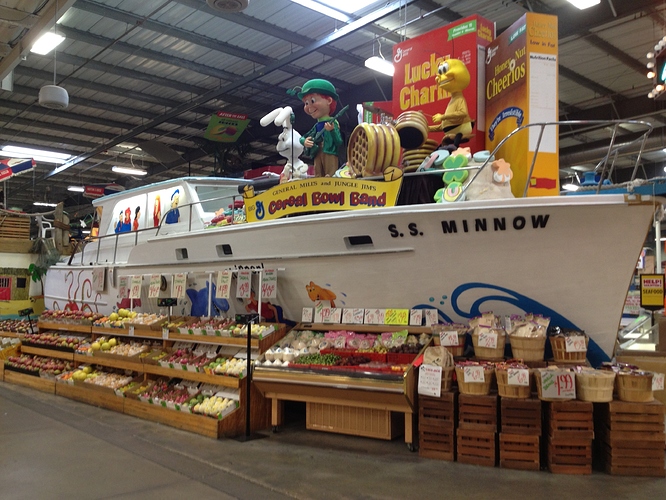 This shit is why I won’t shop there. I am not rich enough to pay for this extra crap.

The most fancy I get is the soda cases arranged to spell out “Go Chiefs”.

Unfortunately I no longer have the picture. But one of our local fish markets used to regularly do such displays. My favorite was a small mako shark head. Wearing sunglasses and an Ed Hardy trucker hat. Next to it was perched a can of Natty Light. And it had a cigarette in its mouth. Around it were head on shrimp arranged to look like they were dancing. And “Party Time” was spelled out under in scallops and pieces of red bell pepper.

Apparently one of the teenaged fish cutters tended to get bored.

ETA: Oh and putting lemons on the swordfish’s bill is a fairly common thing. They can be kind of sharp, so when they’re hanging out there customers can get an uncomfortable poke.

I do appreciate the lemon point-guards.

They’re fans of the culinary arts there.

Yeah, our local supermarket frequently has bizarre and/or shocking displays of partially dismembered fish (my favourite was an octopus looking like it was fighting its way out of a disemboweled salmon with langoustines rampant). Someone on the fish counter has a sense of humour.

That’s pretty rad. Closest I’ve seen is an octopus with maracas and sombrero

Here in Seattle, we just throw the fish.

Oh, god, those guys. You know how many times I’ve had to sit through that corporate propaganda video about ‘how to be happy at work’ they feature in? Grrrr.

Stopped reading when I noticed the word “Artisanal”.