WTF is up with BBCs anti-tattoo propaganda?

Calling that man “tattooed” is like calling WWII a property dispute

Yeah that isn’t A tattoo that is an obsession.

That is a tattoo. One big full-body tattoo.

The simplest explanation is that somewhere in the BBC news organization is an editor desperate to convince themselves not to get a tattoo.

Or justify some other form of sartorial self-repression. Judgment is jealousy’s mask. 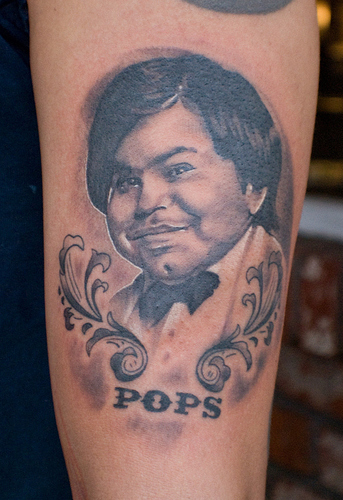 When I was younger, it seemed like tattoos always had a meaning, usually military or prison. Now it seems like everybody has them, and they all look the same.

A few weeks ago I went to the beach, and spent some time just hanging around the boardwalk. There were so many tattoos that it was much weirder to see someone without than with. And I was surprised how many were just big phrases (Bible verses, names, or something like COURAGE) or, quite common, big blocks of text, as if they wanted to cover as much skin as possible and just said “here, tattoo this page of the Bible” or “here’s a poem I wrote on my Trapper Keeper, put it on my leg exactly like it appears”.

I know what you mean! My grandfather, born in 1899, had tattoos on both arms. He made a point of wearing short sleeves when he was speaking publicly because he said “it lets the audience know I’m just a person too.” The implication being that they were mistakes, but I always liked the way he could make the pinup nurse inked on his bicep shimmy.

I’m selfish enough to like art where I can look at it, rather than where other people have the best view. So I love other people’s tats and have no plans to get any!

@popobawa4u, many of my relatives object to tattoos on religious grounds, as a desecration of the artwork of the divine.

many of my relatives object to tattoos on religious grounds, as a desecration of the artwork of the divine.

I’ve heard of such attitudes before, and I’m glad I don’t hold them myself. Seems needlessly pious, since so very much of that divine “artwork” is flawed, whether aesthetically or functionally. I get more offended by the presence of an ugly housing development marring the side of a hill than of ink in the dermis. I’ve always wanted a few tattoos, but never got around to getting any. Maybe someday I eventually will. I just think of it as decorating my presence with some painting I like, albeit one that would be expensive/painful/inconvenient to alter or remove if I change my mind. But I always did enjoy looking at them.

At least these trend tattoos are in English and not Chinese

I have scars that are testament to someone else’s missteps.

In Japan, we are not very keen on public display of tattoos.

My only tattoo regret is not getting more of them.

As I get older, I keep eyeing up tattoo machines and thinking of a spot of DIY.

My only tattoo regret is not getting more of them.

I’ve simply never had anything that I’ve wanted permanently on my body. And I’ve never seen the appeal of putting something in a hard-to-see place… permanently.

I had looked into getting a UV tattoo though – invisible ink that glows under blacklight. So far the ink is still a little unstable and not widely used. But I thought that some Tron-style stripes on my arms would look awesome under blacklight.

I have scars that are testament to someone else’s missteps.

The guy who put one in my left bicep always says, “scars are tattoos with better stories”.

(Although really that particular one was my fault.)

I’ve simply never had anything that I’ve wanted permanently on my body. And I’ve never seen the appeal of putting something in a hard-to-see place… permanently.

I’d do some serious body mods given half a chance. Different strokes, innit.

So far the ink is still a little unstable and not widely used.

So far the ink is still a little unstable and not widely used.

The ink used in tattoos is generally pretty crummy. Ink manufacturers will relabel car paint and there’s no oversight. I don’t trust shit coming out of a needle in a tattoo parlor unless I buy it myself.

many of my relatives object to tattoos on religious grounds, as a desecration of the artwork of the divine.

A human body is just something I’m living in for awhile. To me, it’s no more or less sacred than anything else on the planet.

With infinite variety, there’s bound to be at least one religious order who avoids all decoration (all sacred text in sans serif, 000h, left justified, 11pt, no bold, no italic, no underline, no non-textual symbols) but I’m not aware of them. In a way, the oldest evidence we have of humans being human in a way we can recognize involves things we’d consider art today. It’s a deep part of who we are.

Many of the religions who object to tattoos only object for themselves. I don’t have a problem with their objection since it doesn’t apply to my body. I wouldn’t go out of my way to tell your relatives my opinion unless they went out of their way to tell me theirs.

It is just another anti-Scotland thing.

A tattoo only needs to be meaningful to one person